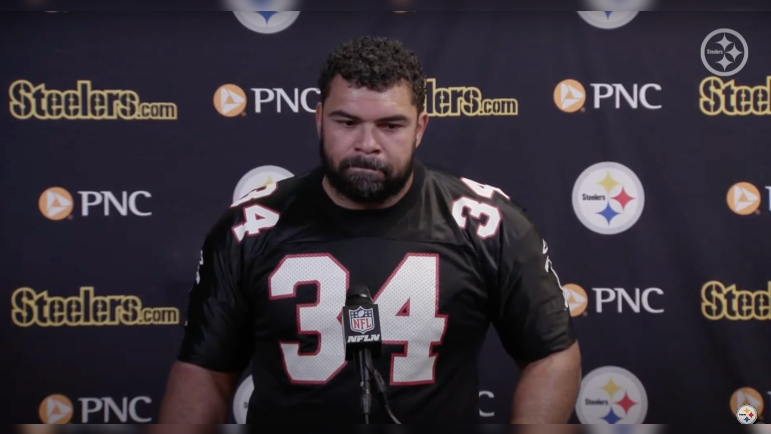 Cameron Heyward doesn’t get emotional much, but Sunday in his return to Atlanta, Heyward couldn’t help but be emotional for multiple reasons.

Back home in the Peach State where he grew up and his father, Craig, played for the Falcons, Heyward and his younger brother, Connor, got up early Sunday morning to visit Craig’s gravesite. There, the two brothers shared a special moment at their father’s gravesite. Craig “Ironhead” Heyward died on May 27, 2006 at the age of 39 a year after another cancerous tumor developed that had metastasized to his brain; the recurrence of the tumor proved to be inoperable.

After sharing that special moment Sunday morning, the brothers had another special moment in the first half inside Mercedes-Benz Stadium against the Falcons in a 19-16 win as Connor scored his first career touchdown in the NFL on a 17-yard pass from fellow rookie Kenny Pickett.

How kool for Connor Heyward. Scores his first touchdown in Atlanta where his pops played. Amazing moment to share with your big brother. I know the entire family has to be beaming.

“This morning, me and him [Connor] went to my dad’s grave and shared a moment there, so I was already pretty emotional coming into the game,” Heyward stated to reporters, according to video via the Steelers official YouTube page. “I don’t like to be Mr. Softy, but that [Connor’s touchdown catch] really hit me.

“Luckily there wasn’t a camera on me, because I was a mess.”

Sports can lead to some special moments, and that’s exactly what occurred on Sunday inside Mercedes-Benz Stadium as Heyward scored in the first half on a Y nod route in which he cleanly beat the linebacker and safety in space, catching the ball from Pickett in the back of the end zone for the score, staking the Steelers to a 13-3 lead.

Heyward is no stranger to scoring in Mercedes-Benz Stadium either, having caught a touchdown last year as a member of the Michigan State Spartans in the Peach Bowl win over the Pittsburgh Panthers.

he’s a fan of those Atlanta end zones. pic.twitter.com/jemhyOyJxy

“It kind of hit me when he scored. I was a complete mess,” Heyward added. “I don’t like to be the soppy person, but it was one of those moments. Back home, this is where the Peach Bowl was last year and he got his touchdown here.

“I like to think God and my Dad are always working together.”

For rookie quarterback Kenny Pickett, being able to throw Heyward not only his first career touchdown pass, but being able to be part of that special moment for the Heyward family is something special for the former Pitt star, who wore the same uniform as “Ironhead” in college.

“It was special. Cam talked to the team before the game, and I talked to Connor — we were walking out to the tunnel together — we said we were gonna get the win for his Pops today,” Pickett stated to reporters, according to video via the Steelers official YouTube page. “Him going out there and getting his first career touchdown in this building is incredibly special, and I think it’s not a coincidence. I think everything happens for a reason.

“Incredibly proud of him and incredibly happy we got the win for those guys.”