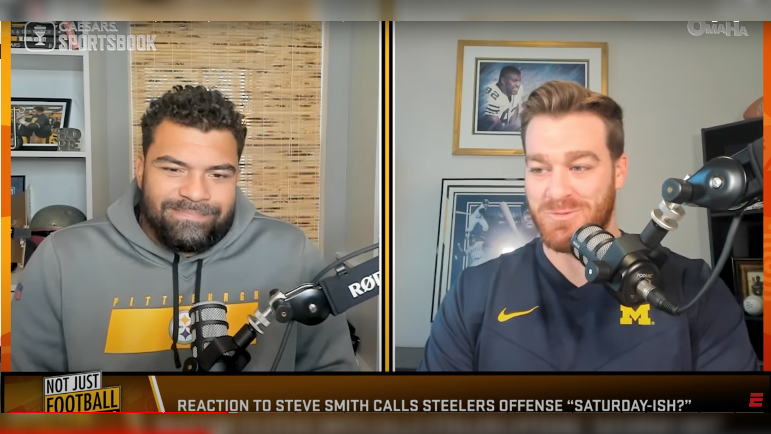 Smith, appearing on the post-game show on NFL Network on Christmas Eve following a thrilling, late 13-10 comeback win for the Pittsburgh Steelers over the Las Vegas Raiders at Acrisure Stadium, called Canada’s play-calling “Saturday-ish” and stated that he’s not an NFL coordinator.

Two days later, appearing on the Pat McAfee Show, Smith doubled down on those comments, stating that he believes Canada is holding back the Steelers’ young offense, which has a lot of talent with the likes of rookies Kenny Pickett and George Pickens, standout receiver Diontae Johnson, tight end Pat Freiermuth and running back Najee Harris.

Steve Smith Doubles Down On Matt Canada Criticism: ‘Leaves A Lot To Be Desired’ Offensively

“Mike Tomlin is a fantastic coach, but I think offensively they’re held back a little bit. Matt Canada, the offensive coordinator, he leaves a lot to be desired on the offensive side,” Smith stated to McAfee and Hawk, according to video via the Pat McAfee’s Twitter handle.

Those comments have certainly raised some eyebrows with many believing Smith had the guts to say the quiet part out loud.

For Steelers team captain and star defensive tackle Cameron Heyward, Smith just calls it like he sees it, and largely has no problem with Smith’s comments overall.

Appearing on the latest episode of his podcast “Not Just Football w/ Cam Heyward” the team captain gave his thoughts on Smith’s comments, as well as on his view of the young offense overall in the Steel City.

“He calls it like he sees it. The bulletin board material, I don’t know if that really applies. But I think it was just not enough of an earlier start to how we wanted to start the game,” Heyward stated to his co-host Hayden Walsh Wednesday, according to video via the NFL on ESPN YouTube page. “I know the offense wants to put points on the board, and we really didn’t up to that point. Only having six points through three quarters is not successful as an offense. And I’m pretty sure they’re looking for ways to correct that.

“But at the end of the day, we got the job done. Saturday-ish, Sunday-ish, as long as we get the Ws, that’s all that matters.”

It wasn’t the start the Steelers wanted to have on an emotional night, period. While the defense settled in after a rough opening drive, the offense never really found its rhythm until the second half. As Heyward pointed out, only putting up six points through three and a half quarters wasn’t good enough.

Fortunately for the Steelers, the offense found its footing on the second-to-last drive, marching 76 yards in 10 plays as Pickett completed 7-of-9 passes for 75 yards and the game-winning 14-yard touchdown to Pickens, giving the Steelers their seventh win of the season.

It hasn’t really been pretty all season offensively, but as Heyward points out, winning while going through growing pains and learning how to be successful in the NFL week by week is a good formula for future success for a young Steelers offense overall, with the oldest starter just 27 years old in Johnson.

Still, that doesn’t take away the issues that continue to occur with Canada at the helm, like the slow starts and the lack of aggressiveness until the game is on the line.