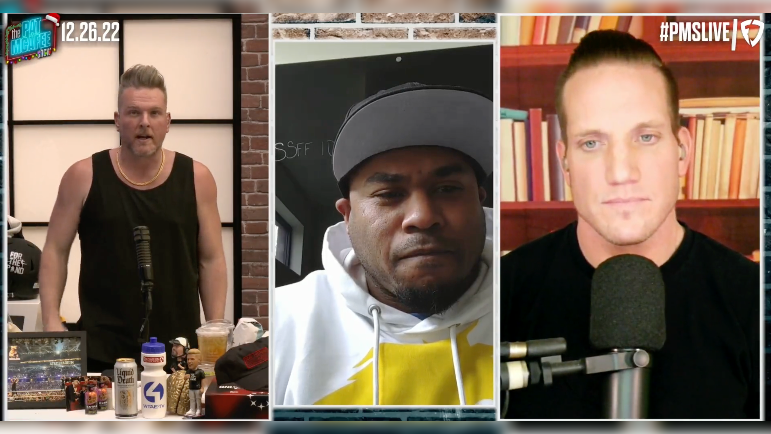 Smith, a pre- and post-game analyst, as well as a half-time analyst for NFL Network, stated following the Steelers win over the Raiders that Canada’s play calling wasn’t pro-level worthy, calling it “Saturdayish.”

“It’s Saturdayish,” Smith said on NFL Network Saturday night from Acrisure Stadium. “I’m saying his play calling is Saturday and this, even though today is Saturday, is Sunday football and it isn’t going to work here. Not on this level. He’s calling Saturday plays on Sunday.”

Smith very clearly had issue with Canada’s scheme overall, saying it wasn’t worthy of being in the NFL and belonged in the college game overall with its motion, jet sweeps and other gimmicks. Smith’s comments raised some eyebrows after the game and certainly became a talking point.

On Monday, Smith — during an appearance on the Pat McAfee Show — doubled down on his comments regarding Canada, stating to McAfee and co-host AJ Hawk that Canada leaves a lot to be desired on the offensive side of the football as a play-caller.

"Mike Tomlin is a fantastic coach but I think Matt Canada leaves a lot to be desired on the offensive side of the ball"@SteveSmithSr89 shares his thoughts on the Pittsburgh Steelers #PMSLive pic.twitter.com/VBKjd7c2hO

“Mike Tomlin is a fantastic coach, but I think offensively they’re held back a little bit. Matt Canada, the offensive coordinator, he leaves a lot to be desired on the offensive side,” Smith stated to McAfee and Hawk, according to video via the Pat McAfee’s Twitter handle.

“Just Saturdayish, you know? I’m really trying to work on not being completely disrespectful to people,” Smith added. “But I’m also trying to just be honest. This is a billion dollar industry, and when you have guys who are making whatever the amount of money they’re making, and they have the label of offensive coordinator and you have Kenny Pickett, you have George Pickens, you have Najee Harris, you have so many good players on your team, Diontae Johnson, and yet your offense, you know, for 57 minutes looks very pedestrian sometimes? It’s just hard to figure that out.”

That’s largely been the question throughout the season for the Steelers under the second year of Canada as the offensive coordinator in Pittsburgh. Throughout the 2021 season it was understood that Canada couldn’t quite utilize the system the way he wanted to in Ben Roethlisberger’s final season due to the lack of mobility the future Hall of Famer lacked at that point in his career.

Once Roethlisberger retired though, the Steelers brought in veteran Mitch Trubisky in free agency because he fit Canada’s system, and drafted Kenny Pickett in the first round as a guy who fit the system to a T.

Throughout much of the 2022 season though, the offense has left much to be desired. They’ve struggled to finish in the red zone, struggle to consistently move the football and overall just lack rhythm under Canada.

For Smith though, it just makes no sense the lack of production overall from an offensive with a handful of big names. For that, it lands squarely on the OC for the former star receiver.

That’s largely the biggest knock on Canada. There’s no rhythm as a play caller and it can be very predictable overall. Opponents have stated that it’s the same plays and that they know what’s coming in a big spot. For that to happen in the NFL is a major concern overall, and has largely led to the struggles.

Of course, execution at times by the players has been an issue as well, but overall the scheme still feels rather bland, which could lead to changes after the season.