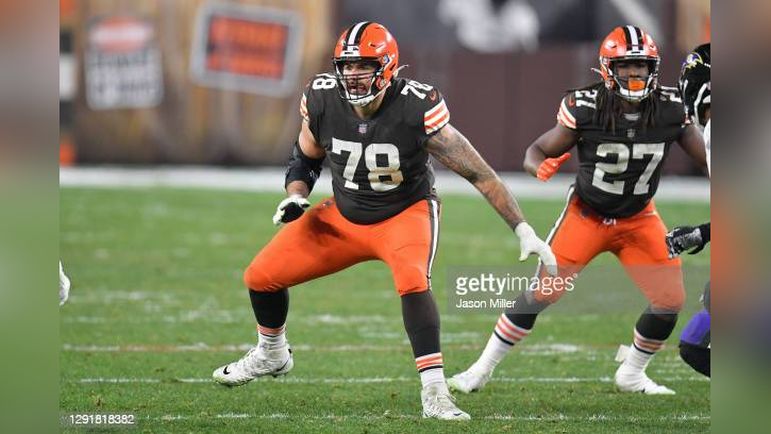 The Pittsburgh Steelers will be seeing Cleveland Browns’ OT Jack Conklin for a long time. Friday, Conklin and the Browns reached a four-year contract extension worth a whopping $60 million as reported by multiple outlets.

Another big-time OL deal: The #Browns have reached an agreement with OT Jack Conklin on a 4-year deal worth $60M with $31M guaranteed, per @DrewJRosenhaus. The deal was done by Rosenhaus, @JasonRosenhaus, and @RyanMatha.

As those tweets notes, the deal is worth $31 million guaranteed, though full contract terms and language isn’t currently known.

Conklin’s previous deal was slated to void after the 2022 season so this deal will lock him in Cleveland for the foreseeable future. Originally the 8th overall pick of the 2016 NFL Draft with the Tennessee Titans, he signed with the Browns in 2020. Though he’s battled a list of injuries, starting just seven games last season, he’s been a quality tackle when healthy and made the 2020 All-Pro team.

To date, he’s started 34 games for the Browns as they look to keep their offensive line intact. They’re built up a solid group highlighted by Conklin, LT Jedrick Wills, and OGs Joal Bitonio and Wyatt Teller. The only missing link is in the middle at center, the Browns going through multiple players this season due to injuries.

Conklin will continue to be a fixture on the Browns’ right side where he’ll see T.J. Watt twice a season. Those two will meet up one more time in the 2022-2023 season when Pittsburgh and Cleveland play each other in Week 18, the regular season finale.

Conklin isn’t the only offensive lineman to get paid before the holidays. Green Bay Packers’ OL Elgton Jenkins received a four-year deal worth $68 million earlier today. With those names off the board, the pending o-line free agency market for the upcoming offseason is looking relatively thin. Kansas City Chiefs’ OT Orlando Brown Jr. remains the top name but he may get re-signed before hitting free agency. Other notable names at tackle include Mike McGlinchey, Andre Dillard, and Isaiah Wynn.