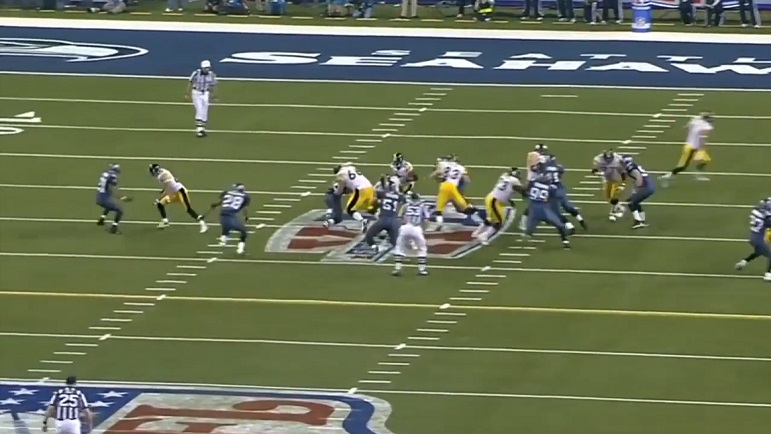 The longest run in #SuperBowl history

Sprung by a crushing Alan Faneca block, the #Steelers' Willie Parker takes it 75 yards to paydirt just after halftime in Super Bowl XL.

“We checked to that play. We had about six plays, and that was the check on all of them, to check to that when the linebacker slid over,” Faneca said. “My responsibility is to kick out the safety, the frontside guard/tackle’s job is to double team, and because the linebackers slid over, they gained the leverage to get that linebacker that would’ve been in the hole,” he continued.

“It was just, perfect scenario of everything”

Faneca said that the play was set up because the Steelers had gotten the ball to wide receiver Antwaan Randle-El in the slot, and once the Seahawks “were tired of Randle El catching these little five-yard dink-and-dunk passes,” they shifted their linebackers. Once the Seahawks shifted their linebackers, quarterback Ben Roethlisberger checked to the play, Parker got the ball and Faneca pulled out and put a great block on Jamie Sharper to give him the hole. Once Parker hit the hole, he was gone for one of the greatest runs in Super Bowl history.

Parker’s run put the Steelers up 14-3 early in the second quarter, and in a game where the offense never really clicked (Roethlisberger struggled with a 9-21 line for 123 yards and two interceptions), the score was massive for an offensive looking for a boost. Pittsburgh would go on to win their fifth Super Bowl by a score of 21-10, with the defense shutting down Matt Hasselbeck, Shaun Alexander and the Seahawks and the Steelers offense capitalizing off big plays like Parker’s run and a Randle El 43-yard touchdown pass to Hines Ward, who was eventually named Super Bowl MVP.

34 Counter Pike, a trap run, was a staple play in the Pittsburgh offense. It involved the offensive line communicating correctly and making sure they were in the right spots to block, and it was especially important the left guard had enough speed and power to kick out the linebacker or safety who would come down to block.

The Super Bowl play is one of the defining plays of Faneca’s career, as not only did he get there and make the block, but he made the perfect block, clearing Sharper out while getting out of the way himself to give Parker enough space to hit the hole with acceleration and burst into the open field. It’s a masterclass in offensive line play, and with the added context provided by Faneca, you have to love the Pittsburgh coaching staff setting the play up with the earlier throws to Randle El and having the faith in a second-year Roethlisberger to check to it at the line.

Watching the Steelers make winning plays in the Super Bowl will never get old, and the 75-yard run by Parker is one that maybe doesn’t get talked about as much as some others, but is certainly up there as far as the level of importance. It was a true team effort, and a big reason why the Steelers have six Super Bowls today.