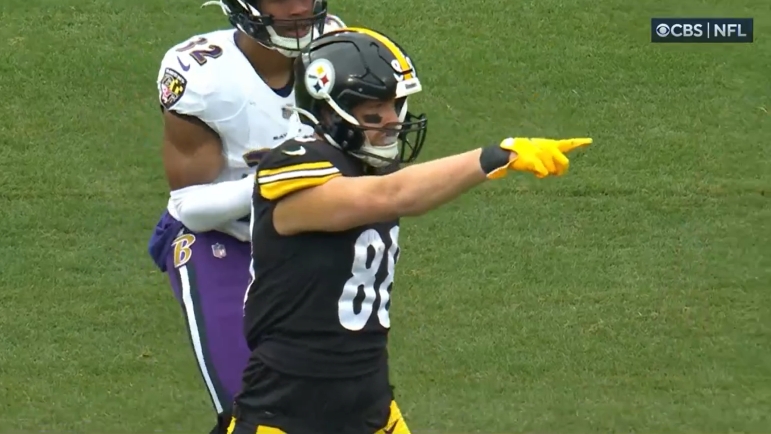 Reasoning: A week after not being targeted a single time, second-year tight end Pat Freiermuth had something closer to his typical stat line in the Steelers’ last outing, catching seven passes on eight targets for 66 yards, including a long of 17.

The Steelers have got themselves a good one in Pat Freiermuth. A good pass-catcher that is. While he is capable of handling some blocking assignments, he has yet to raise his game to the level of thoroughness that one would describe as a complete tight end. I’m not sure he’ll ever be much of an in-line blocker.

But that’s okay as long as he continues to contribute as he has been as a receiving option for the bulk of his career, an area in which he continues to improve. This is a fitting point in the season to take stock of that, as he now has as many receptions in 2022 as he did all of last year.

With 60 receptions as a rookie, Freiermuth only gained 497 yards. On the same number of receptions this year, he has 696 yards, very nearly a full 200 yards more. His yards per catch jumped up from an anorexic 8.3 to now 11.6.

Granted, he had seven touchdowns last year and now only has two, and it took him 11 more targets this year to get the same number of receptions. He has dropped a couple more balls in 2022, though nothing to be concerned about. And going from Ben Roethlisberger to—well, most anybody else—is going to hurt scoring numbers.

Freiermuth was held without a target the week before last. Part of that is because the Steelers ran the ball a lot, so there just weren’t a lot of targets to go around. He was also nursing a foot injury that he played through which caused him to miss practice time. That didn’t help either.

It was the first and so far only game of his career in which he did not record at least one reception. He’s now at 120 for his career. Can he develop into the sort of pass-catching tight end who can hit triple figures in a single season? I think he can, but that depends on how the passing game goes around him.