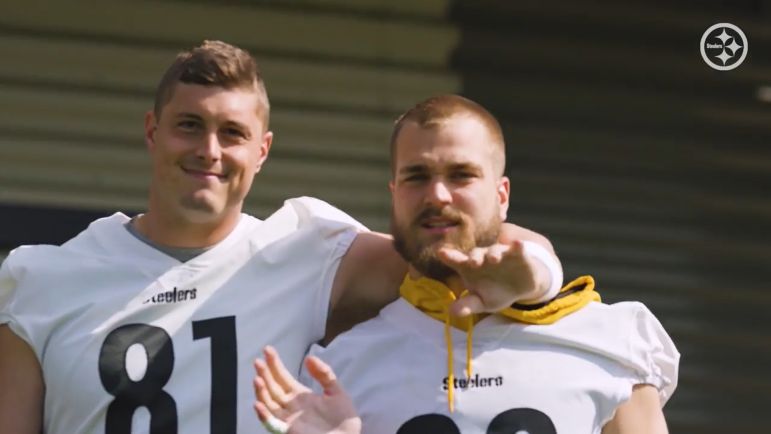 The Pittsburgh Steelers still have seven more games to play this year. Seven more games to make some sort of determination of what kind of offense they want to be after trading away starting wide receiver Chase Claypool and failing, up to this point, to develop a third receiver.

Part of their approach has been to use more two-tight end sets, unsurprising given that they have a couple of tight ends that they like. Pat Freiermuth is tracking to have a career year, though he would surely like to find the end zone more. His connection with Zach Gentry, however, is perhaps the strength of the room. The latter talked about that with Craig Wolfley recently for the team’s website:

He’s such a good football player so he really pushes me to try to be better. He’s got some aspects of his game that are so honed and he does such a great job with the route running and the catching. He’s been able to give me tips and tricks, but at the same token, he’s prolific in that area, so I try to be as good as I can in the pass protection and blocking area to try to free him up downfield. I think it just really bounces off each other and we do a good job of complementing and taking care of one another.

Freiermuth and Gentry are certainly the closest the Steelers have had at the position to the great duo of Heath Miller and Matt Spaeth since the two retired some years ago. Freiermuth drew comparisons to Miller even before he was drafted, and the two have forged a bond since he has been in Pittsburgh.

Like Spaeth, Gentry was primarily a pass-catching tight end in college of above-average height who has transformed himself into a blocker, reinventing his game for the betterment of his team (and for the furtherance of his own career, of course). Both managed to do that successfully, though for each it took a few years.

Spaeth had his Heath. Gentry now has his Muth. Although Gentry is in his fourth season, they are both, overall, still in the early portions of their careers and have plenty of time to grow, not just individually, but together, and to continue to build off of their bond.

Gentry is a free agent after this season, however, and it’s possible that there is some demand for him in a market for the position that often seems to be surprisingly lucrative for blockers like him who are hard to draft and even harder to develop.

But would he want to leave the team and Freiermuth? I wouldn’t think so. I do believe the organization wants to keep him around and would be willing to pay him his market value to stick around and continue to develop in that tight end room—and help bring Connor Heyward along as well.