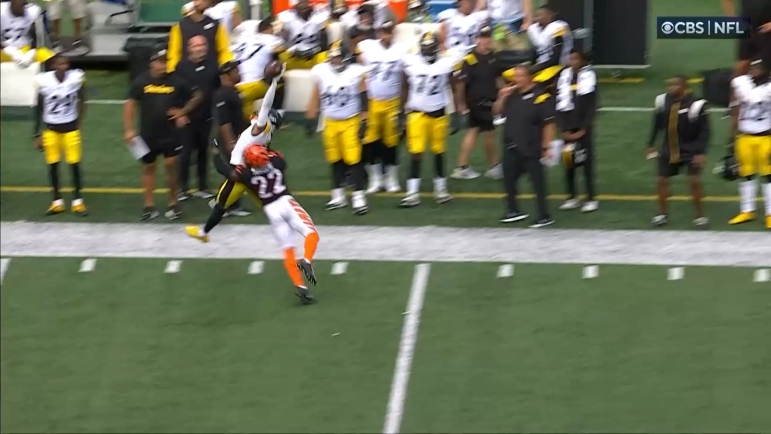 For the first time since Week 3, the Pittsburgh Steelers will find themselves in a heated, tightly-contested AFC North battle on Sunday afternoon at Acrisure Stadium as they welcome the Cincinnati Bengals to town coming off of a bye week.

After starting the ascent out of a deep hole with a win over the New Orleans Saints in Week 10, the climb gets that much tougher in Week 11 for the Steelers as the Bengals ride into town prepared for AFC North football.

Throw out the records, throw out the recent play. These two teams don’t like each other and it’s well-known. Cincinnati is still smarting from that loss in Week 1, while Pittsburgh is looking to prove it wasn’t a fluke.

Things will get rather difficult on Sunday for the two teams that are quite familiar with each other. That’s why the Steelers have to do a good job of locking in again this week and get ready for physical, hard-fought rivalry matchup, according to Steelers wide receiver Diontae Johnson, who spoke to reporters Wednesday, according to video via Steelers.com.

“Well, it’s a big game. I’ll say it’s our rival game, to me,” Johnson stated to reporters Wednesday, according to video via Steelers.com. “Every time we play ’em it’s a good game and everybody is out there competing. It’s AFC North Football, so we gotta win the divisional game. We gotta win this one. No excuses.

“So we gotta be locked in this week an we gonna be ready to focus on this game plan this week.”

Sitting at 3-6 on the season, there’s already a significant sense of urgency within the Steelers’ locker room as they try to climb out of the hole they dug for themselves and get back into the playoff picture. That focus and intensity becomes greater this week in preparing for the divisional matchup against the Bengals.

The last time out, the Steelers needed a blocked extra point from star safety Minkah Fitzpatrick to get to overtime after blowing leads of 17-6 and 20-14. The first start of the short-lived Mitch Trubisky era was rather poor offensively as the Steelers wasted a number of possessions.

Johnson was prepared for the game though, making a spectacular one-handed catch down the left sideline in the second half, sparking the Steelers offense.

Now, with rookie Kenny Pickett under center as the starting quarterback, he’ll get his first taste of AFC North football. The Steelers have to make sure they’re locked in around him and ready to go in all phases of the game, ensuing they can compete for a much-needed win in division play.