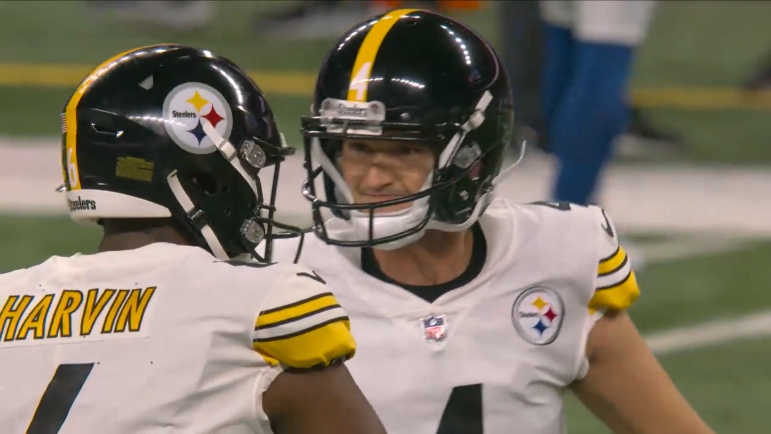 It sounds so cliché but Monday night’s win over the Indianapolis Colts was a true team victory. Speaking to reporters during his regular Tuesday press conference, Mike Tomlin acknowledged how many people played key roles to the Steelers’ win.

“People get an opportunity to put their hand in the pile and be reasons why we’re successful,” he said via the team’s YouTube channel. “Guys like Matt Wright banging field goals. James Pierre, a collection of running backs of Benny Snell and Anthony McFarland, for example. Guys that had elevated roles and really delivered for us in a really positive way.”

The run game was a collective with Najee Harris battling and then leaving the game with an abdominal strain before halftime. Benny Snell and Anthony McFarland shouldered the load the rest of the game. Despite not seeing a single combined carry all season and just a handful of offensive snaps, both ran well, getting downhill, moving the sticks, and keeping the Steelers’ offense on schedule.

Wright continues to fill in for the injured Chris Boswell. After a tough performance in Week 10 against the Saints, missing two field goals, he’s a perfect 6/6 since and hit from 52 yards out against the Colts. It may have doinked in but they count all the same.

Pierre continues to play well when called upon and kicked things off last night with an interception, creating early momentum for the Steelers as they played lights out defense in the first half. Later, Tomlin also mentioned WR Cody White, elevated to the roster for last night, who played on special teams and worked in a run-blocking well to replace the injured Miles Boykin.

For a team who entered the game 3-7, not much has gone right this season. To get back on track, or at least secure a win as a road underdog, it’ll take more than just one person or only the stars stepping up. When Pittsburgh’s won close games this season, something that’s been a struggle for them, it’s because they’ve played well in the fourth quarter and gotten contributions from unsung heroes. Guys like Josh Jackson and Steven Sims against Tampa Bay, players like Snell and McFarland last night.

“This is not a patient man’s business. We never asked these guys to be patient. We asked them to simply work while they wait for the opportunity and, and their work shows when they get the opportunity.”

Most of those players will get another opportunity Sunday afternoon against the Atlanta Falcons. With Harris banged up and Jaylen Warren’s status uncertain, Snell and McFarland could be in line for more carries. Wright will again be the Steelers’ kicker while the team would be foolish not to play Pierre on passing downs the way they did last night. To earn their first winning streak of the year, maybe they’ll rely on different players to step up again.