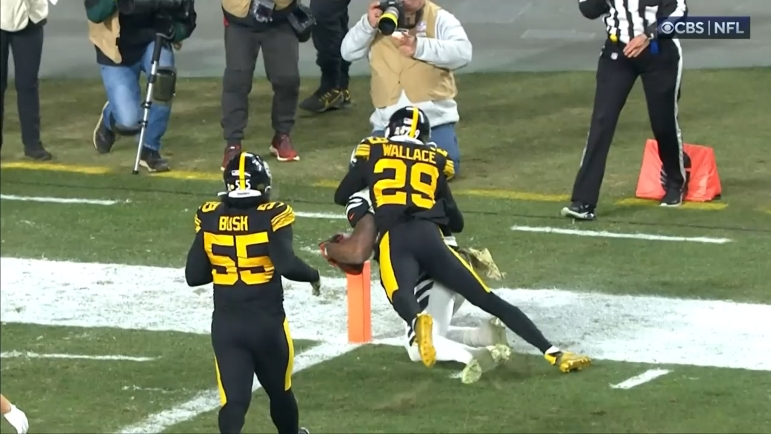 The Pittsburgh Steelers defense already had high expectations coming into the 2022 season under first-year defensive coordinator Teryl Austin, considering the amount of talent they had on the defensive side of the football with guys like reigning Defensive Player of the Year T.J. Watt and All-Pro defensive tackle Cameron Heyward.

Then, when new GM Omar Khan handed out a market-setting extension to star safety Minkah Fitzpatrick, which made him the highest-paid safety (at the time) in the league, those expectations skyrocketed, considering the Steelers became the highest-paid defense in football at around $110 million in total paid to the starters.

That included the offseason signings of Myles Jack, Levi Wallace and Ahkello Witherspoon, not to mention veteran safety Damontae Kazee.

With those expectations came the need to be a dominant defense once again for the black and gold. Through 10 weeks of the season, that hasn’t been the case.

Some of those struggles can be tied to injuries, losing Watt for seven games, Kazee for eight games, Wallace for a couple of games, Witherspoon for a handful, and even Fitzpatrick for two games against Tampa Bay and New Orleans due to injury.

Seemingly fully healthy in Week 11 though with everyone back in the starting lineup (outside of Witherspoon), the Steelers had one of their worst defensive performances of the season in a 37-30 loss to the Cincinnati Bengals, missing key tackles, failing to get off the field in critical spots, and allowing three receiving touchdowns to backup running back Samaje Perine on a day in which Joe Mixon played just 14 snaps and star receiver Ja’Marr Chase was inactive.

That performance in Week 11 has led to some serious criticism of the league’s highest-paid defense in the Steel City. For Austin though, that criticism isn’t something the defense is worried about, especially when it comes to their salaries and the external expectations that come with that price tag.

Steelers DC Teryl Austin on the defense having high expectations but that results, especially last week, not matching it all the time pic.twitter.com/bGXxVAVqB5

“I wouldn’t say things went haywire. I mean, we missed some situations where the back caught the ball on the flat and we didn’t take it. I know Tee Higgins had his yards, but to me, I don’t think that the money and all that stuff, the expectations, no, we just wanna play well,” Austin stated to reporters Thursday following practice at the UPMC Rooney Sports Complex on the South Side, according to video via the Pittsburgh Tribune-Review’s Chris Adamski. “And I think that, regardless of how much you’re getting paid, these guys have a lot of pride in being football players. They’ve earned the money, but they want to play well. They could care less about, you know, ‘Hey, I’m making this much so I gotta play well.’

“No, they just wanna play well because they love the game and we’re just, at times, we’re not making the plays we need to.”

Austin sounds a lot like head coach Mike Tomlin when it comes to lamenting the execution. The Steelers are right there to make the plays, they just simply aren’t at this point and that’s been the difference.

It’s not as if there are significant breakdowns in coverage where guys are running wide open, or that the Steelers are in the wrong personnel at times. No, it’s just simple execution and making the plays when they present themselves. As simple as it might sound, that’s what’s happening.

That can be frustrating with the league’s highest-paid defense, but the big names are the ones making the plays. It’s the role players who are struggling to come up with the key plays in the big spots, which is a highlight to the lack of depth overall.

Still, as Austin puts it, the players want to play well. They certainly care about their profession and want to be great. For whatever reason, they just weren’t able to make the plays in Week 11, which led to the frustrating loss against the Bengals. The players don’t care much about how much money they’re being paid or where they sit in the pecking order at their positions when it comes to salary, at least in season.

That’s an off-season thing for players. Right now, it’s all football all the time.

That price tag brought serious pressure though, and the Steelers defense has struggled to handle that pressure overall.