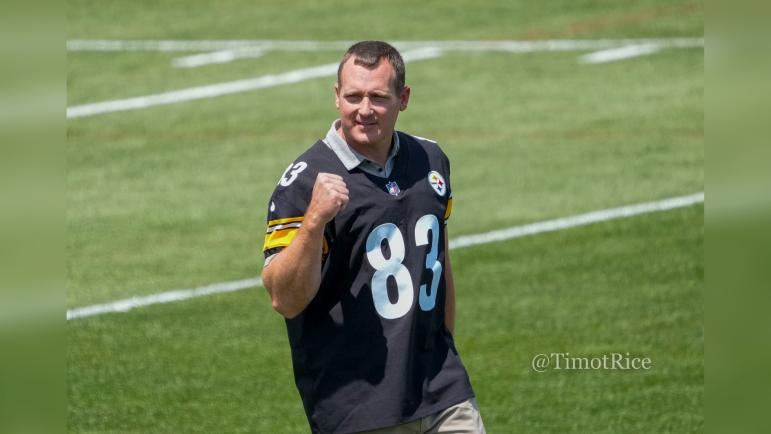 Sunday will be a big day for the current cast of Pittsburgh Steelers as they play host to the New Orleans Saints and try to get their season back on track. But it’ll be an important day for past Steelers as well. Five Steelers will officially be inducted into the organization’s most recent Hall of Honor class.

There will be the four 2022 inductees: Myron Cope, Heath Miller, Ray Mathews, and Sam Davis. Louis Lipps, a 2021 inductee, will also be enshrined this weekend.

The Hall of Honor selections have been known since the summer but will officially be inducted during halftime of tomorrow’s game against the Saints. It’ll come on the heels of the team unveiling its Hall of Honor museum, now open to the public inside of Acrisure Stadium.

Cope was known of the voice as the Steelers as the team’s color commentator for decades, inventing The Terrible Towel and coining many phrases – Double Yoi being one of my personal favorites – still heard today. Cope died in 2008 and will be inducted posthumously.

Miller was a fan-favorite and old-school tight end who could’ve played and thrived in any era. One of the most well-rounded players in the league, Miller was an excellent blocker who spent his whole career, eleven years, in Pittsburgh. He caught 592 receptions for 6569 yards and 45 touchdowns, helping the Steelers to win a pair of Super Bowls.

Mathews is one of the pre-Noll era players and one of the best of that time period. A two-time Pro Bowler, he served as a dual threat runner and receiver, rushing for over 1000 career yards while having nearly 4000 yards receiving along with 34 scores through the air. He was also a great return man with three career punt return touchdowns.

Davis was a starting guard who was part of all four of the Steelers’ Super Bowls during the 1970s. He also spent his entire career in Pittsburgh, 1967 to 1979, starting 114 career games and being one of the unsung heroes of the dynasty. Though he never even made a Pro Bowl, he’ll take four Super Bowl rings instead. He passed away in 2019.

The Steelers’ Hall of Honor opened in 2017 and adds several new members each season.