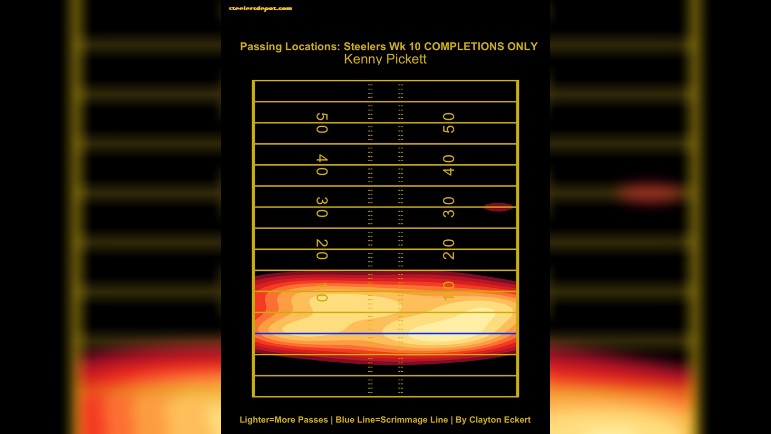 Week 10 is in the books, and it’s time to provide my quarterback passing locations charting for the game and the regular season thus far. In case you missed the previous articles, I will be charting, visualizing, and providing takeaways for the all-important quarterback position for the Pittsburgh Steelers. Thanks to Thomas Mock for his great article that helped me learn much of what I’m using today. A couple of notes before we jump in: All yardage referenced are air yards from the line of scrimmage and bats at the line of scrimmage, spikes, and clear throwaways removed. This week’s charting has a whopping four throwaways removed.

Quarterback Kenny Pickett’s fifth start was in line with the style and game script that played into a much more successful team outing, not having to throw too much as the team never trailed (only seven charted throws in the second half). With a strong defensive performance and a strong rush attack that gained a whopping 217 yards (including four explosives after having none previously), with him contributing 51 rush yards on eight attempts that included an explosive scramble and a sneak for a touchdown, giving him more rush than pass touchdowns on the season! Encouraged by the play calling and variety of routes that created more YAC opportunities as well, fingers crossed that continues.

Pickett had no passing touchdowns though, with accuracy issues particularly early in the game (more on this later) and missing on opportunities in the end zone, one on an overthrow to wide receiver Diontae Johnson who had a step on an explosive attempt and two others just out of reach to tight end Pat Freiermuth (back shoulder) and running back Najee Harris (another explosive attempt on a wheel route). Another example was a near interception, to Freiermuth on an out route he rounded, with the defender undercutting it and could have led him a bit more. Pickett went 18/30 on the stat sheet (60%) for 199 yards and was sacked SIX times in back-to-back games, with some of these on the offensive line but others having poor pocket presence/awareness, bailing clean pockets and escaping toward defenders on multiple occasions, though the Saints deserve a lot of credit with a good game in coverage overall.

Let’s start with a simple view of the 26 charted passes, with the number of throws and pass distances for Week 10: 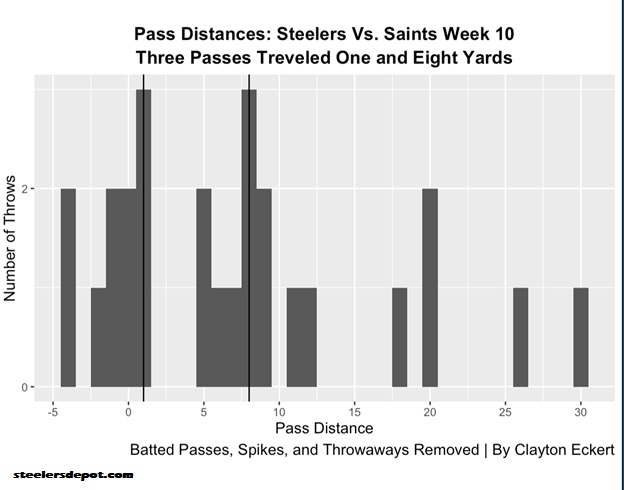 The pass distances for Week 10 were much different, considering the low attempts and route variety for starters. Five-10 yards was the most common at 34.6% (up from 18.9% the previous game). A quality play was on a red zone trip in the first quarter, a great timing throw between the zone linebackers to Johnson on the slant on 2nd and 10, keeping him moving on the target short of the sticks to pick up the first. Another example was an early game comeback to wide receiver George Pickens, catching it past the sticks on 3rd and 6 and ducking the tackle to add additional YAC as well.

The second most common pass distance was 0-5 yards (26.9%) which is normally the most common, and down roughly four points from last game. The highlight was an option route to running back Jaylen Warren, who got more opportunity and particularly excelled in the pass game, this one on an option route at one air yard, another example of keeping the receiver on the move as he stuttered and accelerated past the linebacker down the sideline for the great 26-yard explosive play. Another was on 3rd and 3 early in the third quarter on another slant, this one a similar well-timed and quality throw to Pickens including a great fight to pick up 12 yards on the conversion.

We saw behind-the-line passes above season average (19.2%), but not as frequent as last game (24.3%). A nice play was to wide receiver Steven Sims, taking advantage of an increased workload on a play-action screen with great YAC on the gain of 15. Compared to 10.8 in the previous game, 15.4% of throws were explosive against New Orleans while 11.5% were 15-20 yards which is down closer to the season average after a season-high 18.9% in Week 8. The least common pass distance (as is the case in most weeks) was 10-15 yards at 7.7%.

Here are the dots for the charted throws for Week 10 as we add more context: 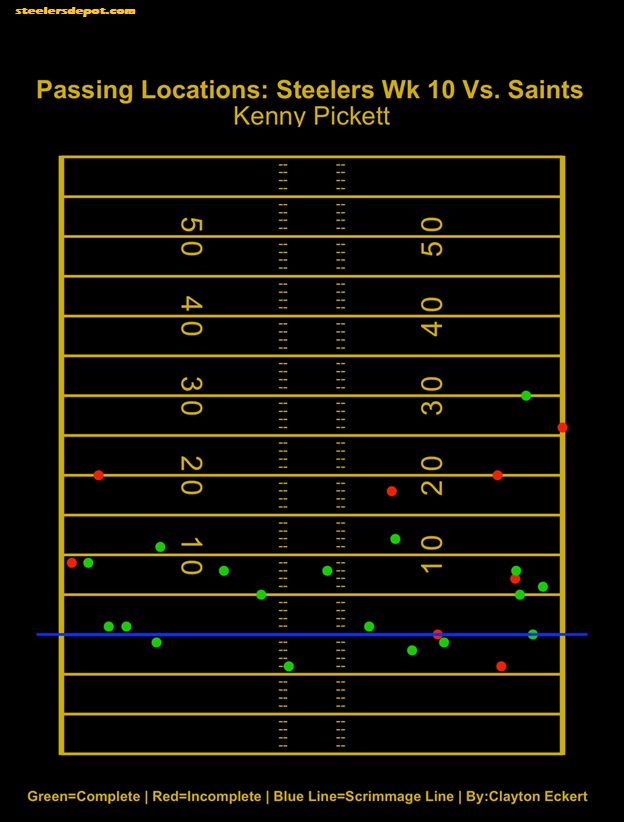 A very similar trend in yet another week for Pickett, excelling at 10 yards or less where most of his attempts came. He went 15/19 (78.9%) and was particularly successful between the numbers in this range (6/6). My favorite was the over-the-middle target at eight yards on an over route to Frieirmuth, another good read past the linebackers, reeling in the one-handed catch and providing the necessary YAC for the first down. He favored the right side of the field at this distance but had less success (5/8, 62.5%). Pickett was 2/2 from 10-15 yards, the first on a stop route past the sticks to Johnson on a 1st and 10, but ran backward for -3 YAC on the would-be chain mover. The other was on an inaccurate low pass, with Freiermuth going down to get it, but was short of the sticks and limited any YAC opportunity on third and 13.

Pickett was 0/3 from 15-20 yards, including the first play of the game on a crosser to Pickens that was thrown behind. Explosives were 1/4, with the longest attempt being the completion, a great play looking off the single high safety and firing to Johnson who stacked on the outside on the go route for the solid catch. They have really struggled to connect downfield, so this was great to see them connect here on Pickett’s longest air-yard completion of the season. Two of the incompletions were end zone targets mentioned earlier, and the final one was a poor read and overthrow to Freiermuth on the crosser in triple coverage. 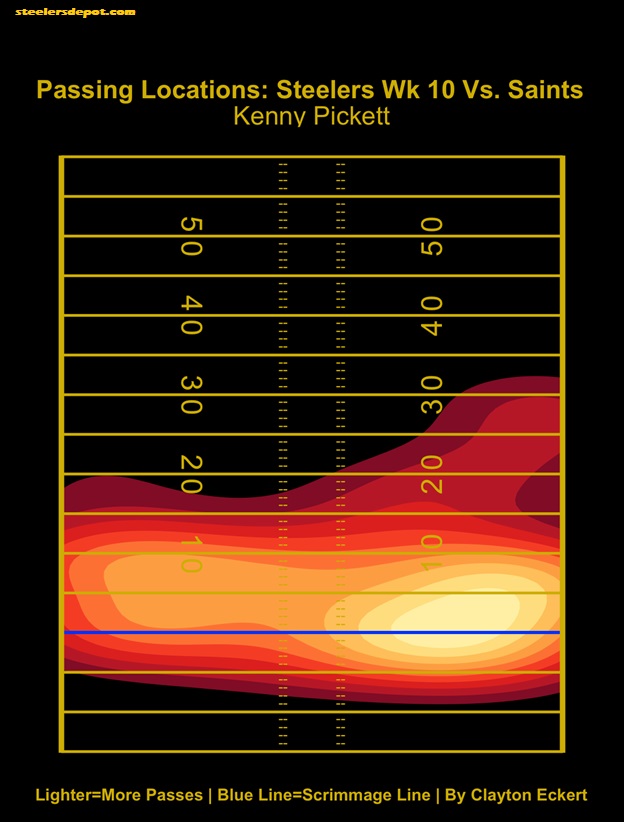 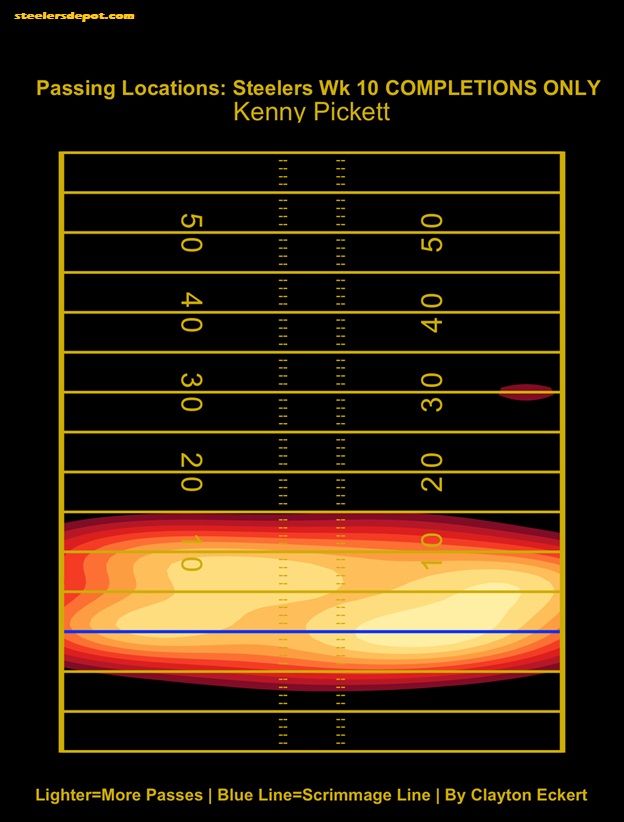 The first chart really highlights the lack of downfield passes that we’ve grown accustomed to, with targets to the right at -1 to five yards being the most targeted area. The extreme drop-off on the completions-only chart is still the bugaboo, highlighting only one completion past 12 yards!

Now let’s look at the 303 charted throws on the season for Pickett and quarterback Mitch Trubisky: 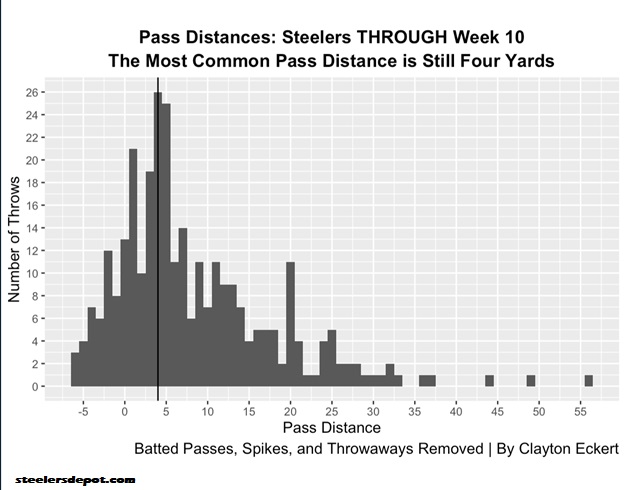 The most common pass distances are starting to settle overall with a reasonable sample size. Zero-5 yards is still most common at 37.6%, which has come down a percentage point in each of the last two games. Five-10 yard passes have been the second most common, seeing an uptick of nearly a point to 24.4%. Ten-15 yards at 15.5%, which also declined following Week 10. Explosive saw a 0.1-point bump this week up to 14.2%.  Steadily increasing the past few weeks with Pickett playing exclusively, behind-the-line throws are at 13.2% now. The least common pass distance is still 10-15 yards at 10.6%, for another increase (0.1) after a noticeable increase in the previous game.

Here are the dots for the 2022 season through week ten: 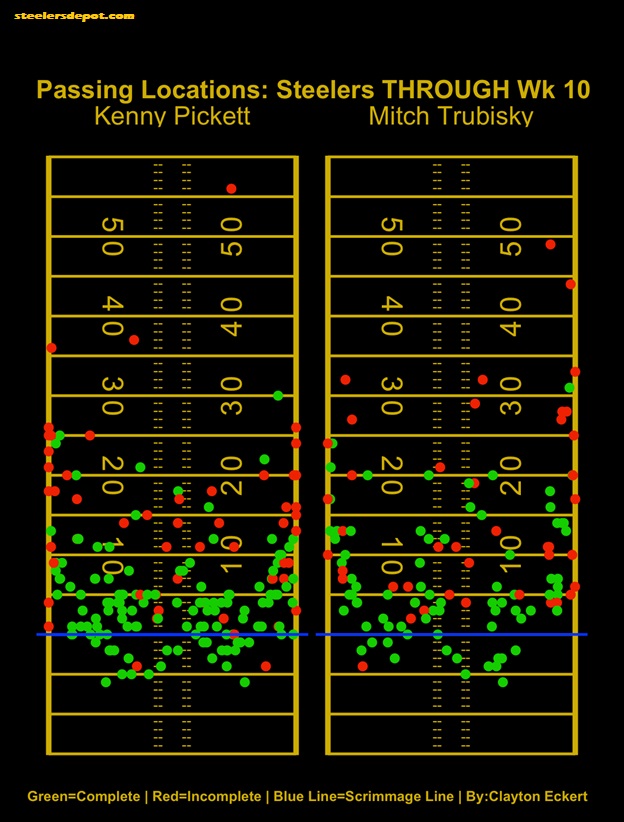 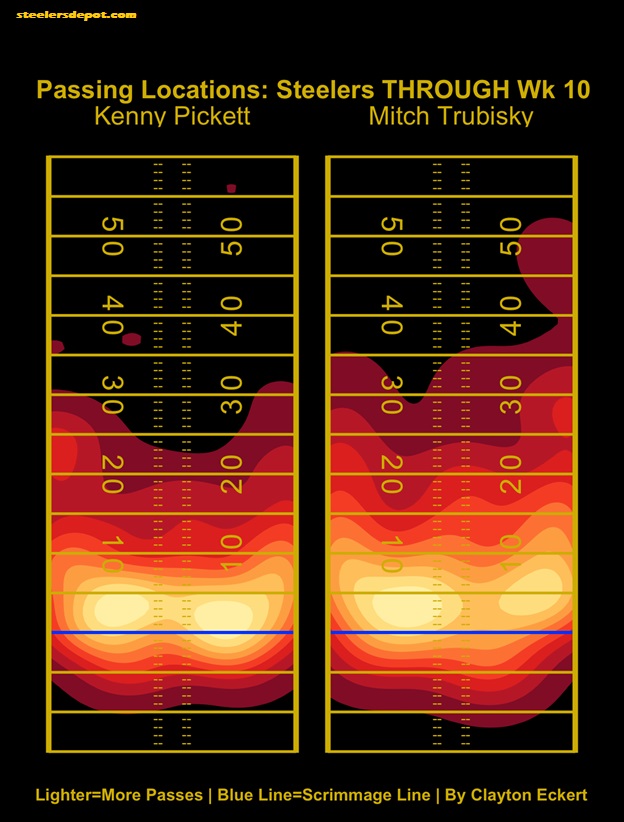 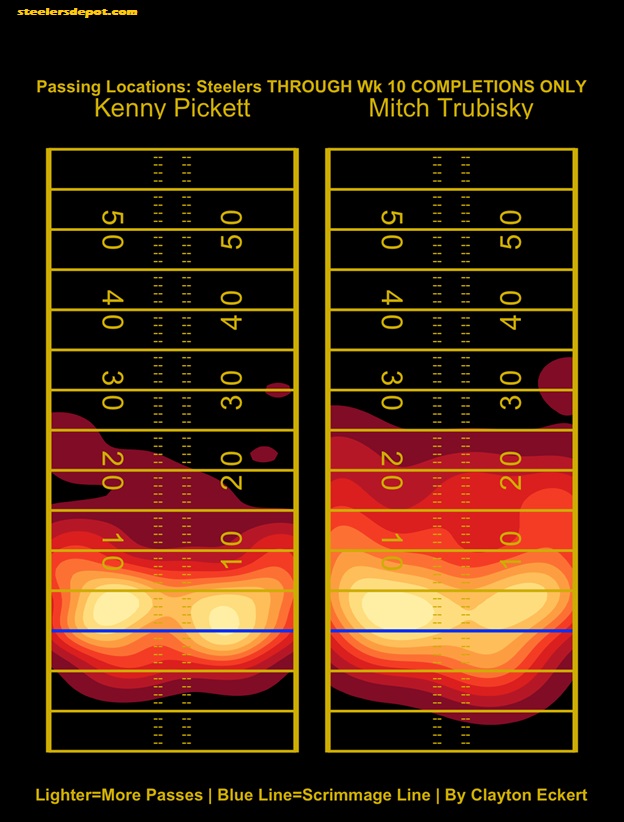 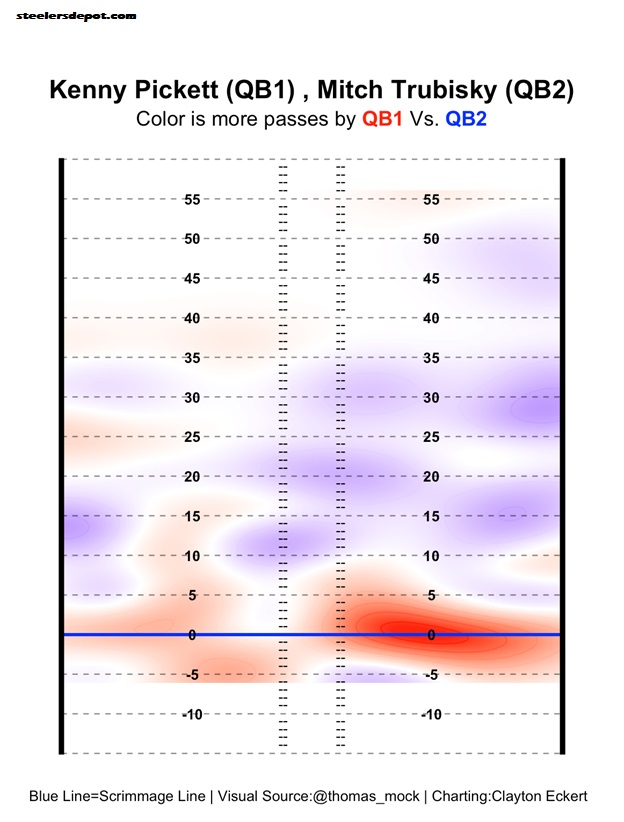 What are your thoughts of Pickett’s performance against the Saints? What about how the Steelers quarterbacks have compared to date? Thanks for reading and let me know your thoughts in the comments!