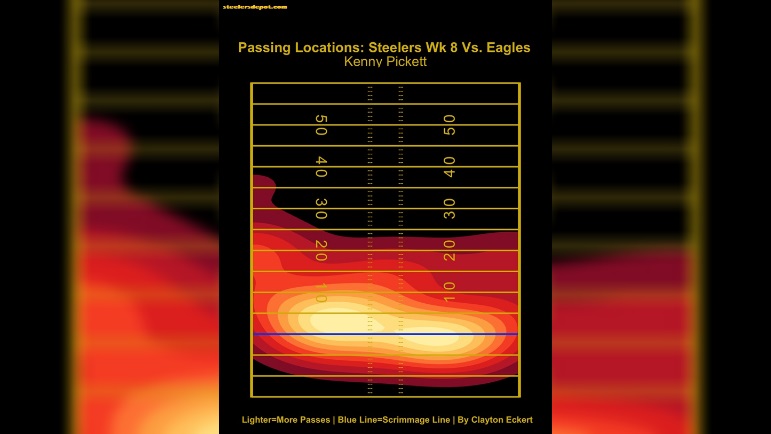 Week eight in the books, and it’s time to provide my quarterback passing locations charting for the game and the regular season thus far. In case you missed the previous articles, I will be charting, visualizing, and providing takeaways for the all-important quarterback position for the Pittsburgh Steelers. Thanks to Thomas Mock for his great article that helped me learn much of what I’m using today. Couple notes before we jump in. All yardage referenced are air yards from the line of scrimmage and bats at the line of scrimmage, spikes, and clear throwaways removed. This week’s charting has a batted pass removed.

Quarterback Kenny Pickett’s fourth start was a rough outing for the entire team in the 13-35 beat down, as I detailed in my game recap. For Pickett in particular, he went 25/38 (65.8%) for 191 yards and no touchdowns, with the only touchdown pass coming from former Steelers wide receiver Chase Claypool (traded to the Bears) off a surprising jet sweep wrinkle on the goal line. Pickett was sacked SIX times, with a rough outing from the offensive line, and some of those on him needing to get the ball out. One of his least accurate games as well (unfortunately been a trend), including one interception. This was the last pass of the game, which has unfortunately happened 3/4 games he has finished. I also noted three other near interceptions, the first on a play action rollout to wide receiver Diontae Johnson which was off target but a great reaction from the defender. The other two were intended for tight end Pat Freiermuth (becoming a trend), one an overthrow where I did enjoy the process, a route concept going up the middle with wide receiver crossers behind it that stressed the linebackers, and the last was a low pass on an out route with another good reaction from a linebacker.

The team’s nine penalties definitely negated some good throws. Also noted a lot of play action, particularly early in the game, and was a better YAC game especially from Freiermuth early, but some coming late with the game well at hand, skewing the total numbers. No catches for wide receiver George Pickens in this game on only three targets, and the connection with the two rookies has been up and down on a game-by-game basis. This holds even more weight now with the aforementioned jettison of Claypool, and will be interesting to see what this looks like moving forward.

Let’s start with a simple view of the 37 charted passes, with number of throws and pass distances for week eight: 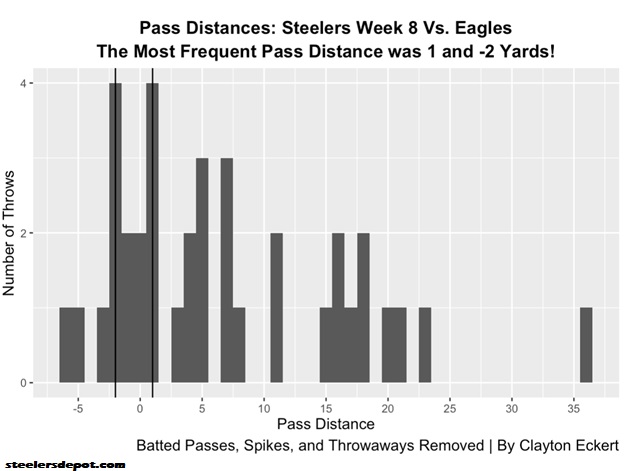 The percentage splits for pass distances were much different in this game. 0-5 yards was still the most common pass distance at 32.4%, just over 15% less than less week. Two enjoyable examples were in the second quarter, both to Freiermuth. The first was from a trips bunch alignment where he got wide open on a stop route with 13 tough YAC, and the other a flat route caught at the line of scrimmage, catching the low target and making a good cut for eight YAC.

If you thought previous games were dink and dunk, an extremely high 24.3% of passes were behind the line of scrimmage, for the second most common pass distance of week eight. For context, this number came in at 11.9% & 7.7% last two games! Mixed results here, with one highlight being a screen to Johnson early in the game, setting up his blocks well for 16 YAC. A frustrating play was the third and three where running back Najee Harris caught it at the lone and danced around, you’re a big back…muscle forward!

18.9% of passes were 5-10 yards, noting a nice throw early in the game on an out route and another to Freiermuth where he churned and extended for a first down. 18.9% were 15-20 yards, tied for the third most common pass distance. Refreshingly like the quantity, but this is where the interception came (where the defender tipped it in the air). One great play was an intermediate angle route over the middle by Freiermuth that Pickett sold well, getting wide open against the zone on the explosive 21-yard gain. Speaking of which, 10.8% of passes were explosive but lacked success once again (more on this to come), including two miscommunications on end zone targets in the red zone with Pickens and Johnson. 8.1% 10-15 yards, which has typically been the least common pass distance with Pickett at the helm, but up 1% from last game.

Here are the dots for the charted throws for week eight as we add more context: 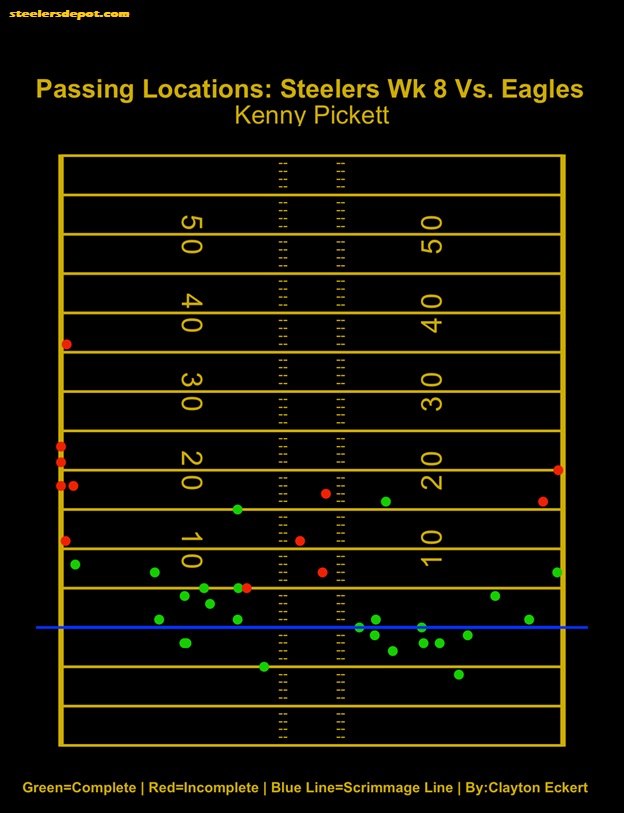 Very familiar chart for Pickett, excelling at five yards or less, with only one incompletion (20/21) which is a fantastic 95.2%. He really favored the right side of the field near or behind the line of scrimmage (10/10), and was also successful on the left side with a bit more frequency toward the numbers. Past five yards has been the crazy thing as of late, with sadly only five completions, 5/16 in total for an unacceptable 31.3%, yikes.

The incompletion dots from this game in totality are really telling (ten of 12 incompletions past ten yards), with the middle of the field (0/3) and the sidelines (2/10) being extremely painful, for an abysmal 15.4% completion rate, including 0/4 in the explosive range. One frustrating throw in this range was a slot fade to Pickens where he stacked the defender, and Pickett needed to lay it out instead throwing it back shoulder, which slowed Pickens momentum and allowed the pass defensed. The others were the two route miscommunications mentioned earlier, and the longest attempt to Johnson an arguable pass interference. 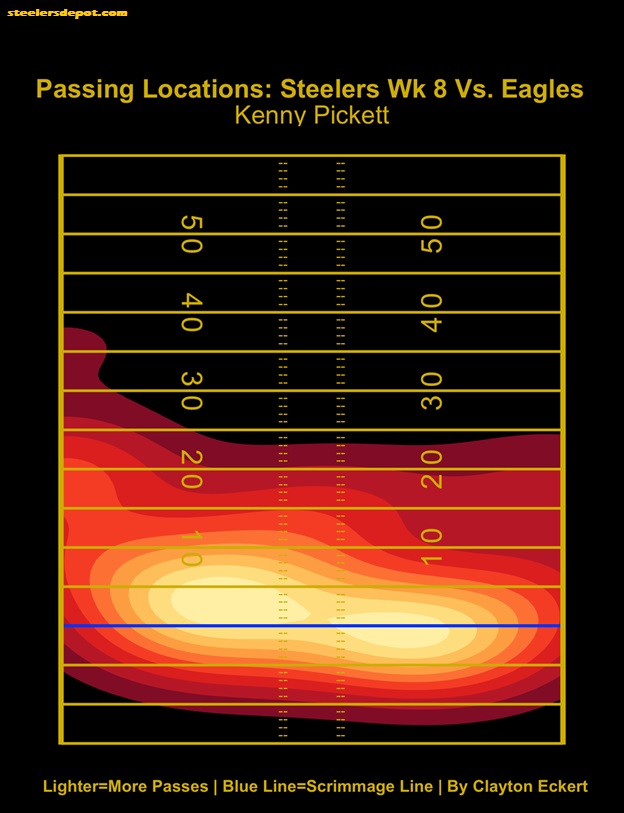 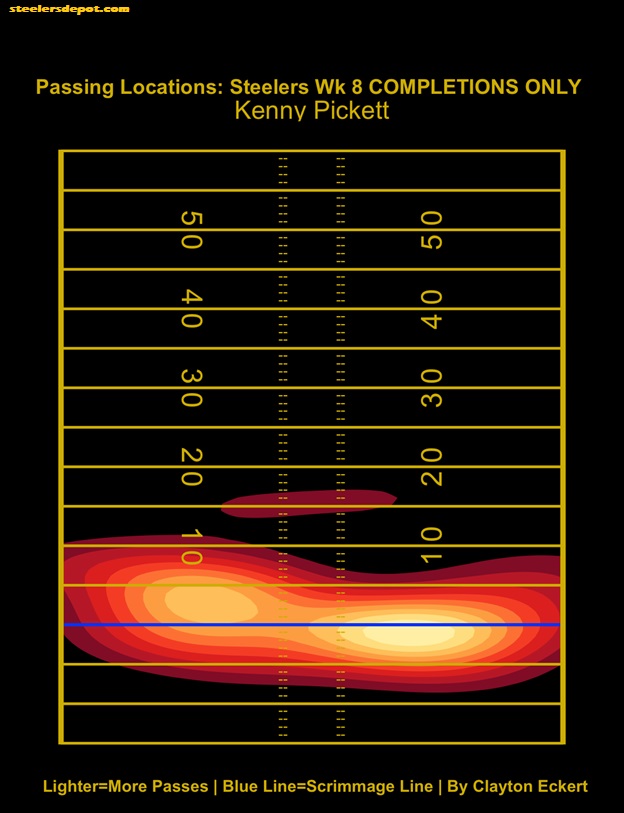 The first chart believe it or not is a bit better than last week in terms of attempted pass depths overall, with one to -2 distances outside the hash to the outer numbers, along with 0-6 yards on the left being the most targeted areas. Unfortunately, we are getting used to extremely unappealing completion graphs, with the “heat maps” possibly needing to be renamed “dark maps”. Struggles continue downfield, sustaining drives (1/8 on late down passes, and 1/12 in totality on third downs), and worst in the league in scoring (15 per game).

Now let’s look at the 277 charted throws on the season for Pickett and quarterback Mitch Trubisky: 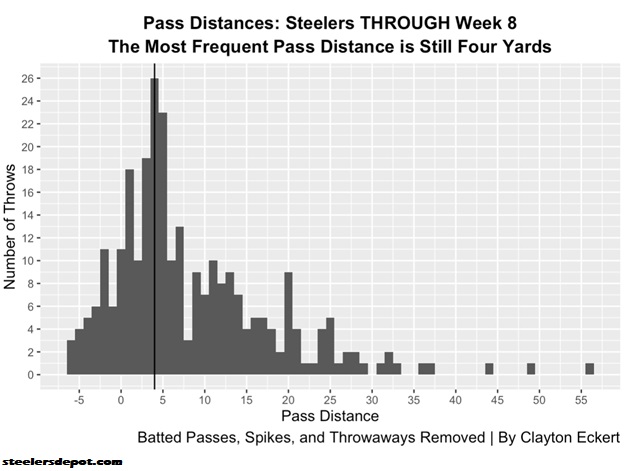 Here are the dots for the 2022 season through week eight: 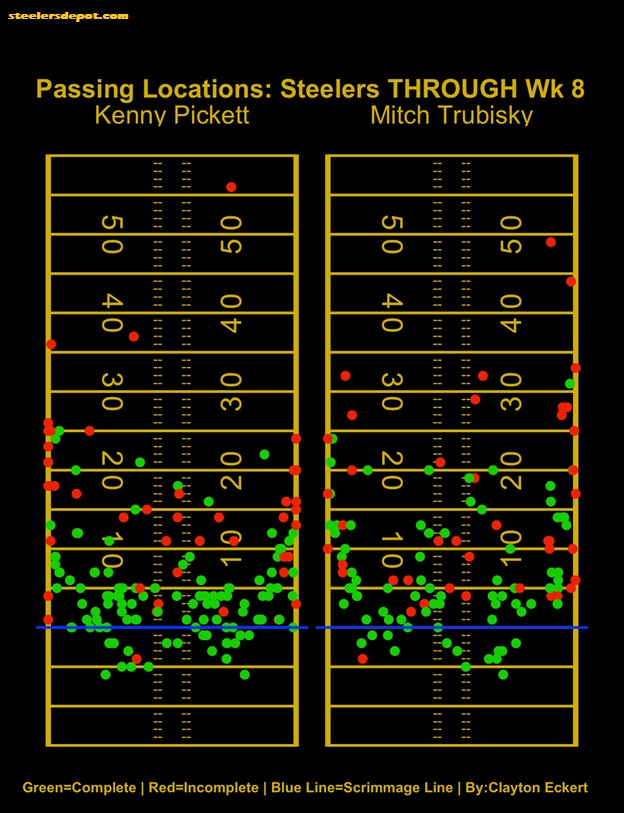 On the stat sheet, Pickett is now 112/165 (67.9%) compared to Trubisky’s 78/128 (60.9%). Each quarterback has only one incompletion behind the line, and we can really see Pickett’s higher short area success at ten yards or less. Another positive for Pickett is the high success rate near the numbers in this range. The closer you get to the middle or sidelines is the other side of the coin though, no matter the pass distance.

Pickett is now 13/33 (39.4%) on intermediate passes and 5/17 (29.4%) on explosive attempts, each continually dropping with each start (43.5 and 38.5 through week seven). In comparison, Trubisky was more successful in the intermediate range 23/37 (62.2%) along with the edge in explosives (7/22, 31.8%). One of the biggest need for improvement for Pickett as many already knew (understatement of the year), but the numbers really add context to how bad it’s been and the dire need for improvement. 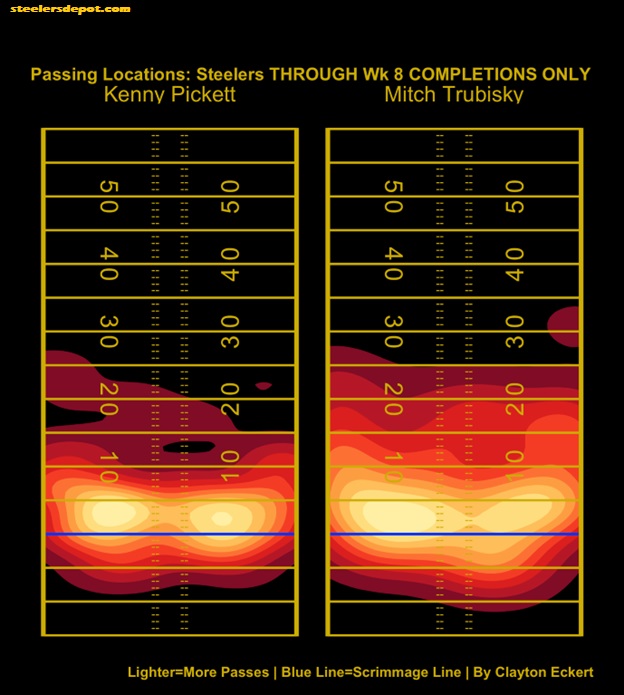 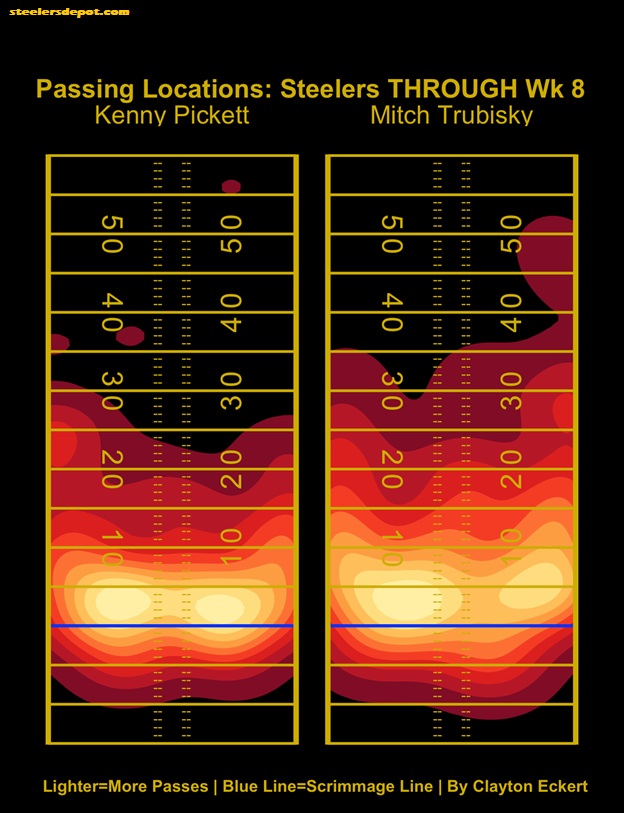 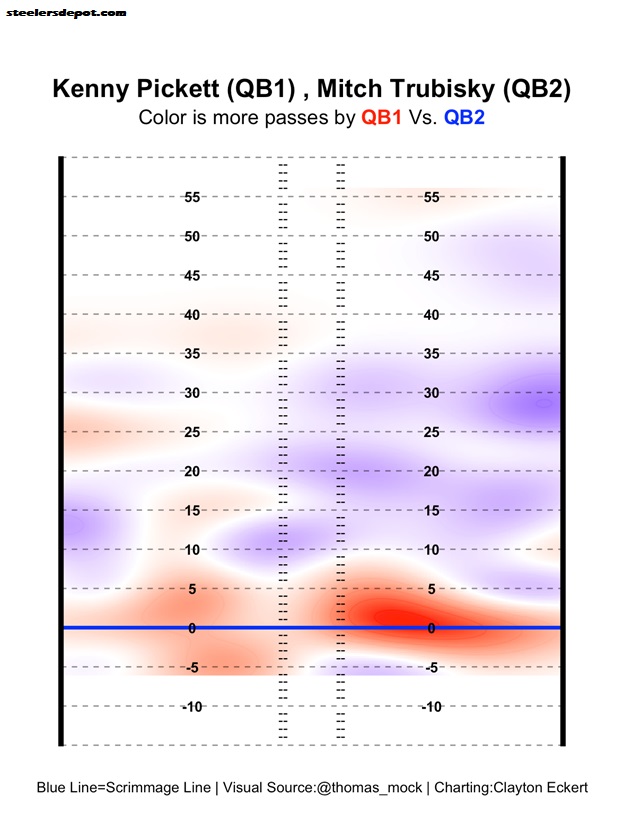 What are your thoughts of Pickett’s performance against the Eagles? What about how the Steelers quarterbacks have compared to date? Thanks for reading and let me know your thoughts in the comments!