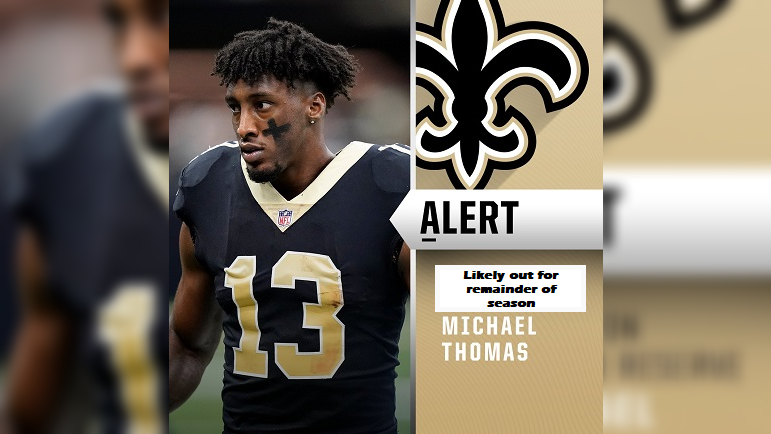 Coming out of their bye week, the Pittsburgh Steelers play host to the New Orleans Saints at Acrisure Stadium in Week 10. We already knew the Saints would be down one weapon in running back Mark Ingram, but it was announced today by Saints head coach Dennis Allen that wide receiver Michael Thomas would go on injured reserve and miss the rest of the season with a dislocated second toe, obviously sidelining him against Pittsburgh in Week 10. The news was passed along by Mike Triplett of New Orleans.Football.

Saints will place WR Michael Thomas on injured reserve and he will have surgery on his toe, according to coach Dennis Allen, who said he doesn’t know the exact timetable but doesn’t anticipate that Thomas will return this year. Was a dislocated second toe.

Thomas only played in three games this season, but he had at least five catches in every game and had three touchdowns before suffering his foot injury in Week 3 against the Carolina Panthers. Thomas’ final stat line for 2022 will be 16 catches, 171 yards and three touchdowns.

Thomas was one of the best receivers in the league early in his career, with over 1,000 yards in each of his first four seasons and he totaled a league-leading 125 receptions in 2018 before improving on that with 149 receptions for 1,725 yards in 2019. Not having Thomas available will make things much more difficult for the New Orleans offense, led by quarterback Andy Dalton. Rookie wide receiver Chris Olave will likely be the team’s top target with Thomas sidelined, while receiver Jarvis Landry will also step into a larger role for New Orleans.

For the Steelers, it would certainly be a positive momentum boost if they could get a home win against New Orleans coming out of the bye. With the Saints, Cincinnati Bengals, Indianapolis Colts and Atlanta Falcons awaiting in Pittsburgh’s next four games, getting some positive momentum with a win against New Orleans could potentially help the Steelers get out of that stretch with a winning record, which would be nice to see given that they’ve won just two games all year and sit in the AFC North basement at 2-6.