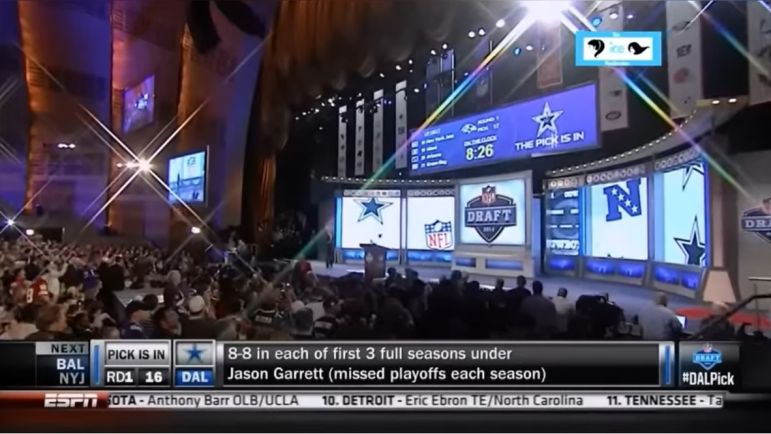 Ryan Shazier the…Dallas Cowboy? Evidently, it almost happened. A guest host on Cam Heyward’s most recent Not Just Football podcast, Shazier took the show through his draft night and how the Cowboys told Shazier’s camp he was headed to Dallas. Until the Pittsburgh Steelers stepped in and snatched him away.

“This was around the time of the draft I thought I was going to get drafted,” Shazier told Heyward. “14th or later…my agent ran up to me and said, ‘Ryan, I just wanted to let you know with the next pick you’re getting picked by the Dallas Cowboys.’ They called my agent and said, ‘Ryan, you’re getting picked next pick by the Dallas Cowboys.’ The Dallas Cowboys were 16, the Pittsburgh Steelers were 15. My dad’s texted people, ‘Ryan’s about to go to Dallas’…and then I saw my phone ring and it was a 412 number.”

Of course, Dallas never got the chance to put in the card with Shazier’s name. Pittsburgh selected Shazier 15th overall and after some rookie growing pains, he became the team’s next great linebacker. It should also be known that’s two Steelers’ elite linebackers Dallas either passed on or didn’t get the chance to select. In 2017, they passed on T.J. Watt for Taco Charlton, deeming Watt a poor scheme fit, and now we know they missed out on Shazier, too, though they simply never got the chance to draft him. To be fair to the Cowboys, they got an awfully good consolation prize, drafting OG Zack Martin instead who has become one of the league’s top offensive linemen.

Reflecting on how close he came to playing in another city, Shazier said he was thrilled to become a Steeler instead.

“I’m happy I came to the Steelers because I loved Coach Tomlin growing up. I’ll be honest, as an African American male to have an African American coach, that’s phenomenal. I knew getting drafted there, we’re going to win. He’s known for winning. I knew it was going to be a great culture. Being a linebacker in the city of Pittsburgh, it’s almost like royalty if you’re good.”

Shazier also revealed the Steelers downplayed their interest in him during his pre-draft visit with the team. Then-linebackers coach Keith Butler told Shazier the Steelers were unlikely to draft a linebacker in the first round and were probably going to address another position. During the podcast, Heyward set the record straight and said Butler and Mike Tomlin talked Shazier up throughout the entire pre-draft process.

“Every game Ohio State had on, I’d watch Mike T and Buts, breaking down,” Heyward said. “‘You see that linebacker? You see him? I like him. If we can get him, we’re gonna get him…you could’ve just asked me, I would’ve told you.”

The Steelers have never had a good poker face when it comes to the draft and despite Butler’s conversation with Shazier, the feeling was Pittsburgh would take him. And so they did.