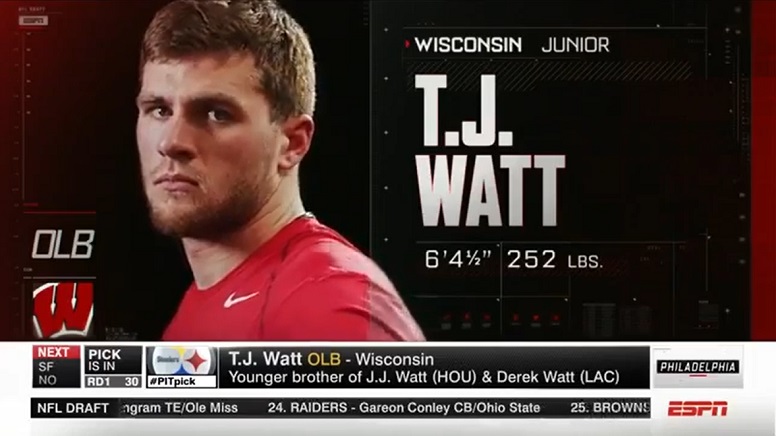 During the 2017 NFL Draft, the Dallas Cowboys owned the 28th overall selection in the first-round, which was two spots ahead of where the Pittsburgh Steelers were picking at 30th overall. At the time, many wondered if the Cowboys would select linebacker T.J. Watt out of Wisconsin come their time to pick. As it turned out, the Cowboys selected Michigan defensive end Taco Charlton with the No. 28 overall pick and that turned out to be an unbelievably bad choice. The Steelers quickly pounced on Watt two selections later and the rest his history.

Ahead of the Steelers playing Dallas on Sunday, Cowboys COO Stephen Jones was asked during a local radio interview on 105.3 The Fan if he ever looks back at that 2017 draft and specifically the team’s decision to draft Charlton instead of Watt.

“Absolutely,” Jones said while laughing. “You always do that if you’re truthful and you’re honest about what might could have been. The harder part of that is he was in serious contention [to be the pick]. I think the biggest issue was we were playing a 4-3 (defense) there with Rod (former Cowboys defensive coordinator Rod Marinelli), and Rod was concerned about how he’d hold up against the run in the 4-3, and (he) didn’t have that same concern with Taco.

“Obviously, if you had that to do all over again, I wish we would have done that. And, of course, he’d fit probably better in some of the things we’re trying to do with Coach [Mike] Nolan and our defense. He’s obviously a great player, he’s already on his way to a great career, not unlike his brother, and I congratulate the Steelers for getting him.”

As the story goes, Watt took a 2017 pre-draft visit to Dallas to visit with the Cowboys. As Jane Slater of the NFL Network recently recalled, Watt’s phone rang ahead of the Cowboys first-round selection and his parents proceeded to put a Dallas hat on his head. As it turned out, that phone call was from the Steelers, so Watt had to quickly remove the Cowboys hat from his head.

Fun story talked to T.J Watt ahead of this one and he told me he and his family were so convinced that when his phone rang ahead of the #Cowboys pick his parents immediately put on the Cowboys hat…he had to quickly tell them to take it off it was indeed the #Steelers https://t.co/fF3Qgvo6Ra

As for Charlton, who is now a member of the Kansas City Chiefs, the Cowboys parted ways with him just a few weeks into the 2019 season. He has 11 career sacks while Watt enters Sunday’s game against the Cowboys with 41 quarterback takedowns.

In essence, Steelers fans can probably thank Rod Marinelli for Watt winding up being a member of the Steelers. His fears pre-draft about Watt holding up against the run as a base 4-3 defense is what led to the Cowboys passing on the Wisconsin product to draft Charlton instead. Watt, by the way, has registered 28 total run tackles for loss since 2017 and only eight other players have more during that span.

As for Marinelli? He now coaches defensive backs for the Las Vegas Raiders.