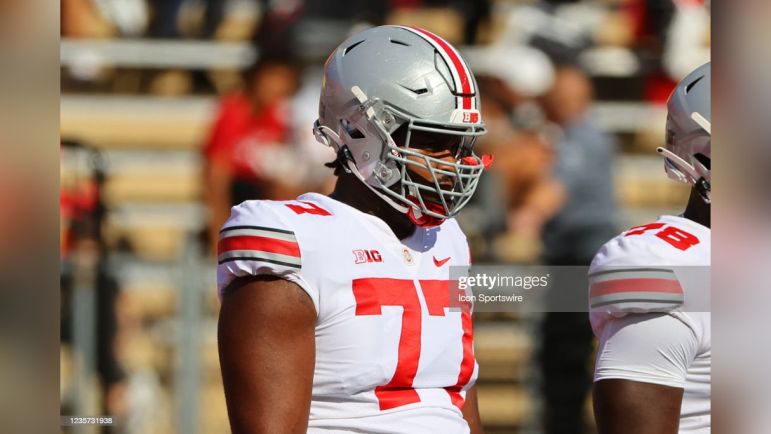 After moving to 3-6, the Pittsburgh Steelers are now 10th in the draft order for the 2023 NFL draft. Though it is an improvement from them projected having the first overall pick a few weeks ago, it would be the highest a Mike Tomlin team picks in the draft by quite a bit. With their projected 10th pick, Mike Renner and Trevor Sikkema of Pro Football Focus have the Steelers selecting Ohio State offensive tackle Paris Johnson Jr. in their Thursday mock draft.

“The Steelers definitely need some O-line help,” Sikkema said in justifying the pick. “Johnson has that versatility, and his long-term outlook could be a franchise tackle.”

While the Steelers’ offensive line is outperforming expectations, there is room for improvement. The one player that is arguably the most likely to be replaced is left tackle Dan Moore Jr, who Johnson would be a shoe-in replacement for at the position.

On one hand, Moore is coming off his best game of the season. PFF graded his performance against the Saints at 89.6, which was a career-best and the highest grade on the offense. If Moore continues to develop, it is hard to imagine the Steelers being in a hurry to replace him, especially given that he is only on his second season.

Not to mention, 18-year quarterback Ben Roethlisberger also stated that he expects Moore to be the team’s left tackle for many years to come. Moreover, the last time the Steelers drafted an offensive tackle in the first round was Jamain Stephens in 1996, and never under former general manager Kevin Colbert. This indicates that the management does not value the position to that extent, and they may not view the tackle position as one of immediate need.

On the other hand, Johnson is indeed an intriguing prospect, and Sikkema is not overstating his potential. At 6′ 6″ and 310 lbs, Johnson is a prototypical offensive tackle. He plays on one of the best offensive lines in college football, and plays for the undefeated Buckeyes. Last season, he played right guard for the top offense in the FBS. It is easy to argue that he has a higher ceiling than Moore, and that the Steelers must pull the plug if he is available.

While the team has indeed not drafted an offensive tackle in over two decades, they are under new management. General manager Omar Khan and his assistant Andy Weidl will have their first draft, and there is no telling whether they will follow past trends. After all, the team just drafted a franchise quarterback, and the best favor they can do him is finding a potential long-term protector of his blind-side. The left tackle position is widely regarded as one of the most important in football, and it would not be the worst thing for the Steelers to pull the plug on one.