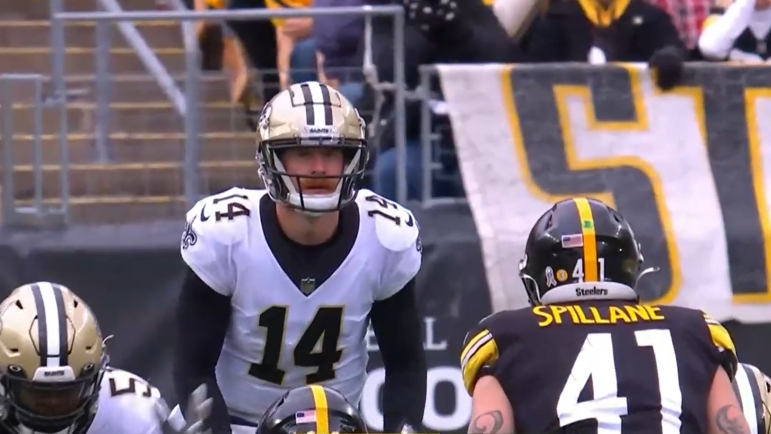 From rushing for 200 yards to pitching a second half shut out, the Pittsburgh Steelers had an excellent all-around game to get a much-needed victory against the New Orleans Saints.

Of the many great performances on Sunday, Pro Football Focus singled out one player’s performance as particularly dominant, as well as one player that had a particularly poor performance. That is, in his weekly “one up, one down” article, Doug Kyed of PFF singled out outside linebacker Alex Highsmith as the Steelers’ player whose stock went up after Sunday, and inside linebacker Robert Spillane as one whose stock went down.

“Highsmith was a man possessed,” Kyed said in justifying his selection of Highsmith. “Pressuring Saints quarterbacks four times with two sacks and two hurries. He beat his offensive lineman on three more snaps.”

As Kyed also pointed out, Highsmith had an astounding pass-rush grade of 90.9. Indeed, Highsmith had a strong performance on Sunday, totaling five tackles, two sacks, one QB hit, one tackle for loss and one forced fumble. In a game where the Steelers’ defense pitched a second-half shut out, it is especially impressive for Highmith’s performance to stand out over others.

As the team leader in sacks, Highsmith is positioning himself for an extension with the team. A third round pick in 2020, the third-year linebacker has turned out to be a great surprise for the Steelers, and may play opposite reigning DPOY T.J. Watt for years to come. In Watt’s first game back from injury, the Saints’ offensive line could not afford to double Highsmith as others have in recent weeks. If this remains the case moving forward with both Watt and Highsmith healthy, this pass rush may wind up as one of the league’s best.

“There wasn’t a ton to complain about in the Steelers’ win over the Saints on Sunday,” Kyed continued in justifying his pick of Spillane. “But Spillane did let up six catches on eight targets for 51 yards and three first downs in coverage.”

Spillane, who has struggled in pass coverage this season and throughout his career, had a 49.8 coverage grade on Sunday. According to PFF’s premium stats, Spillane has a 43.2 coverage grade on the season, and is allowing a 115.7 passer rating when targeted. Furthermore, Spillane’s 51 yards allowed was the most on the team on Sunday. Spillane is splitting snaps at the middle linebacker position with Devin Bush, and sometimes playing alongside him. Though pass coverage is evidently not his strength, the team continues to play Spillane in dime and nickel packages, which is costing them big.

This is not to say that Spillane is a bad player. In fact, he made an impressive read for a crucial stop on Saints’ quarterback Andy Dalton’s fourth and one sneak in the fourth quarter. The fact is, Spillane’s strength as a player is in run defense, and the team must recognize that moving forward.

While Spillane did not have a great game in pass coverage, his performance was far from terrible. As Kyed said, there was indeed not a ton to complain about in the Steelers’ victory. Indeed, Spillane had a 62.1 overall PFF grade on Sunday and an 80.6 run defense grade, which is not terrible for the lowest graded performance on the team. This was arguably the Steelers’ best all-around performance of the season, and it’s one that they must build off.