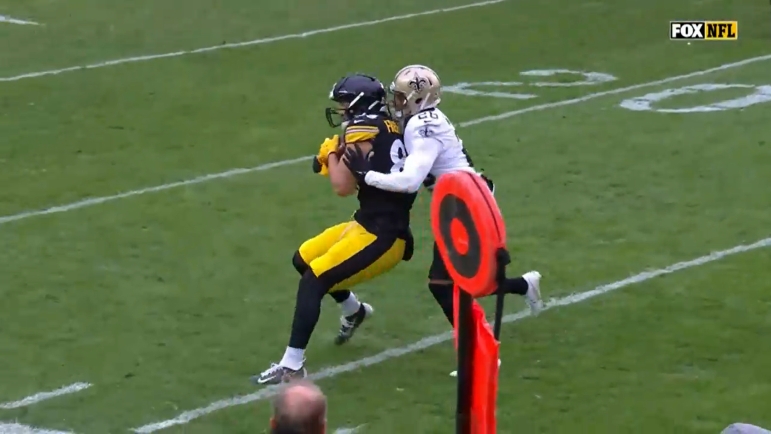 Without Chase Claypool, the Pittsburgh Steelers’ offense didn’t change in any major or obvious ways. They used more subtle tweaks and adjustments to their offense for their best showing of the season. But perhaps no player benefited more from the Claypool deal than TE Pat Freiermuth. While his numbers in yesterday’s win weren’t spectacular, four catches for 36 yards, the Steelers slightly changed how they used him, flexing him out in the slot more than being used as an in-line tight end.

Speaking to reporters today, Freiermuth said he welcomed the change.

“I like it,” he said as shared by The Trib’s Chris Adamski. “I feel comfortable out there. I liked it, enjoyed it.”

Pat Freiermuth on the offense not changing much post-Claypool pic.twitter.com/sn1Dcb0nd6

According to the data, Freiermuth did stand up in the slot more often this game compared to what he’s normally been asked to do. According to JJ Zachariason, Freiermuth’s slot route was roughly ten points higher compared to his seasonal average.

As a follow-up to that: Freiermuth played 39% of his snaps from the slot today, about 10 percentage points higher than his season-long average.

While Freiermuth’s numbers didn’t jump off the page, he still made big plays. He had a key one-handed snag over the middle of the field and helped keep the Steelers’ offense on schedule. Late in the third quarter, he had recorded a 12-yard gain on 1st and 10 from their own 14, giving the offense breathing room as they went on a long drive that ended in a Matthew Wright field goal. He was also Kenny Pickett’s favorite third down target with his other three receptions coming on possession downs, though none were able to move the sticks.

Freiermuth is on pace to finish his sophomore season with 68 receptions for 761 yards and two touchdowns. While his receptions would be similar and his touchdowns way down, his yards and yards-per-reception have dramatically increased. He’s averaging 11.2 yards per reception this season, nearly three full yards better than his average his rookie season.

His in-line blocking has still only been about average and splitting him out allows for more chances like Zach Gentry to be a better asset in the run game or in 11 personnel, walking out a defender to help lighten the box. But Freiermuth is a highly effective blocker in space, helping clear the way on George Pickens’ 22 yard rush, one of four explosive runs the Steelers had yesterday.