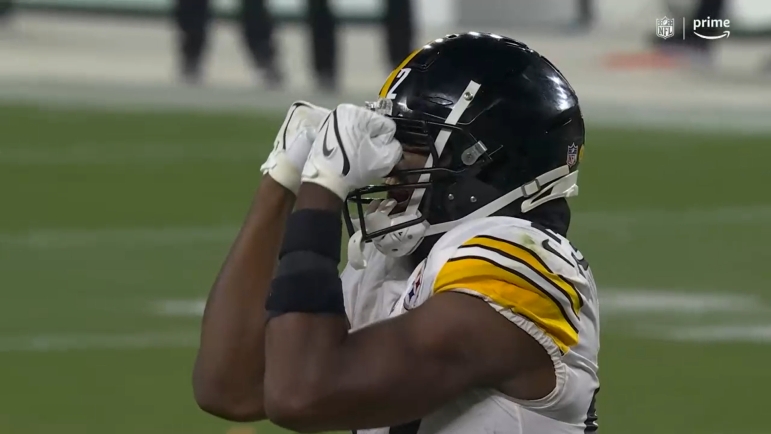 Pittsburgh Steelers’ second-year running back Najee Harris hasn’t had the best sophomore campaign. After going over 1,000 yards and looking like a threat in both the run and pass game as a rookie, the former first-round pick has taken a step back in year two, as he’s yet to total 100 total yards in a game and hasn’t been very effective at all on the ground, with just 3.3 yards per carry. Harris told reporters, including Josh Rowntree of 93.7 The Fan, that he just has to keep working and the results will come.

“Keep your head down, keep grinding, keep working, keep finding ways to get better. If the answers not there, look for a better one, just keep going until you find that answer and that solution,” Harris said via Rowntree on Twitter.

At this point in the season, it’s surprising Harris hasn’t had a breakout game yet. He got a steel plate out of his shoe before the team’s Week 6 win over the Tampa Bay Buccaneers, and while he was mildly effective in that game (14 carries for 42 yards, two catches for seven yards) and the ensuing loss to the Miami Dolphins (17 carries for 65 yards, three catches for 15 yards) those aren’t necessarily the numbers you’d want out of a lead back you invested a first-round pick in a year ago.

Harris knows he has to be better, and besides the foot injury, he’s also dealing with an offensive line that doesn’t get a ton of push in the run game. But that just means Harris has to hit holes harder and with more force and run straight instead of side to side in search of more space. He showed that he can be an upper-tier starting running back in the league. He’s clearly taken a step back this year, and while you can blame the injury and the offensive line, you need more out of him given the investment level.

I’m a believer in Harris and I think we’ll see him eventually start to turn things on relatively soon. If he doesn’t though, you have to question whether or not the team wasted a pick on a running back in the first round. Looking at undrafted rookie Jaylen Warren compared to Harris right now, there isn’t a lot that Harris is doing that Warren hasn’t been capable of thus far. I’m still rolling with Harris as the RB1, but if his struggles continue the questions about spending a first on him are only going to get louder and louder.

Not only that, but the Steelers need Harris to perform. Their offense just flat-out isn’t good right now, and the lack of an effective run game is a big reason why. With a rookie quarterback, you need to lessen the burden with a sound and effective run game that can rip off chunks of yards. Take a look at the Tennessee Titans. Malik Willis isn’t very good, but the Titans took Kansas City to overtime last Sunday by giving the ball to Derrick Henry and letting him do his thing. Kenny Pickett wouldn’t have to do so much if the Steelers had a good run game, but they don’t right now because Harris hasn’t been able to get going. If he does, this will be a much better football team in the second half of the season.