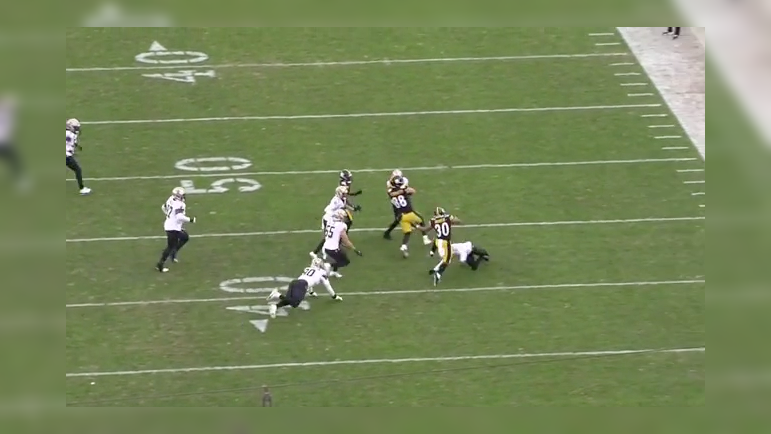 Coming out of the bye week, it would have been understandable if the Pittsburgh Steelers were a little bit rusty and sloppy (at times) in the tackling department.

Instead, in a 20-10 win at Acrisure Stadium in Week 10 over the New Orleans Saints, the Steelers were on the top of their game in the tackling department, missing just two tackles in the win.

That mark of two missed tackles is a new franchise record for lowest number of misses in a single game in the seven years I’ve been tracking the missed tackles weekly here at Steelers Depot.

Talk about starting the second half with a bang!

Two missed tackles is simply incredible no matter how you try and slice it.

Coming into the matchup against the Saints, the Steelers paid a ton of attention to star running back Alvin Kamara and dynamic do-everything offensive weapon Tayson Hill.

The two combined for 11 carries for 27 yards. That’s a testament to the front seven of the Steelers playing sound, assignment football, rallying to the ball carrier and tackling quickly and efficiently.

As a defense, you’ll take that every day and twice on Sundays against an explosive talent like Kamara.

Here is Alualu’s miss in the first half. It’s a tough play to make, no doubt, but one that he’s expected to make getting that type of penetration into the backfield at the snap.

Alualu is a little caught off guard that he’s unblocked on this play and takes a second to regain his bearings and seek the football. Once he does, he’s just a step slow and has to reach for Kamara, who easily steps past him, avoiding the arm tackle to get two yards on the play.

A younger Alualu probably makes this play, but he is 35 and coming off of multiple lower body ailments. Still, it’s a miss.

In the third quarter, AFC Defensive Player of the Week Alex Highsmith records his missed tackle on a draw play to Kamara.

Highsmith does a nice job running this game with Cameron Heyward, freeing himself up to get back inside directly in the hole Kamara is looking to hit.

He just overruns the Saints’ running back though, allowing Kamara to spin back outside, picking up seven yards in the process on third and long. It’s certainly a play Highsmith would want back.

I did not give Larry Ogunjobi a missed tackle here as contact with Highsmith bumped him out of the play and ultimately knocked him to the turf.

Offensively, the Steelers had a field day in the forced missed tackles department, forcing the Saints to miss 11 times, winning the ever-important tackles battle by a mark of +9, improving the season mark to 5-3-1 on the season.

While it was great to see rookie quarterback Kenny Pickett make some magic happy with his legs as a runner, a pair of fellow rookies forced big missed tackles in the win, sparking the offense.

Rookie tight end Connor Heyward had an increased role on Sunday and came up big deep in the Steelers’ own end on his second catch of the day.

The Steelers ran a similar concept earlier in the game and Heyward got absolutely leveled by New Orleans rookie cornerback Alontae Taylor.

It’s no surprise they came back to it, though this deep in their own end was a bit of a surprise. Credit to Heyward for getting his head around quickly though after the catch, flipping his hips and exacting some revenge on Taylor, forcing him to miss in space, picking up eight yards on the play to set up a third and manageable.

Later on the same drive, second-year running back Najee Harris continued his strong day, forcing a pair of missed tackles on a 10-yard run, getting the Steelers near midfield.

He’s at his best when he’s a one-cut runner, getting downhill in a hurry and running hard behind his pads.

That’s what he did on this run, dragging defenders to the sticks at the end of the run, setting up the 36-yard deep shot to Diontae Johnson on the very next play.

So smooth in space, Warren showed off his ability to hit top speed in a hurry on the windback draw play. Check out the blocking by Pat Freiermuth on Tyrann Mathieu too.

That’s just a phenomenal hurdle by Warren though, closing out the win in style, forcing two misses on the 21-yard run, and allowing the Steelers to run out the clock in the win.