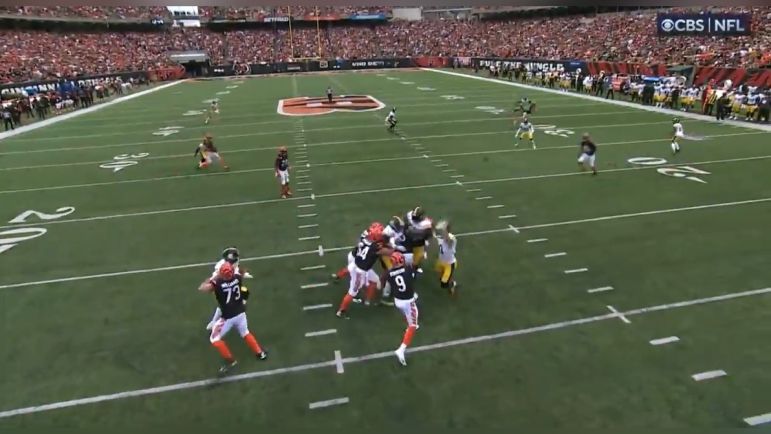 Last time the Pittsburgh Steelers and Cincinnati Bengals met up was Week One, and in that matchup Joe Burrow had an unusually poor game. Burrow threw four interceptions in the Bengals 23-20 defeat to the Steelers including a pick-six to Minkah Fitzpatrick on the second play of the game.

However when meeting with the Cincinnati media today as shared by the team’s YouTube channel, Burrow vowed not to throw another four interceptions.

“I’m just gonna be smarter with the ball” Burrow remarked. “I’m not gonna throw four interceptions. That’s an outlier for me so that’s my plan going in.”

Burrow’s play outside of the Steelers game has been pretty good. He’s only thrown six total interceptions on the season, which ironically have all come against AFC North opponents. In Cincinnati’s win against the Atlanta Falcons, Burrow threw for 481 yards and three touchdowns in their 35-17 thrashing of the Falcons.

Burrow has been on a complete tear since Week Two with him having a quarterback rating of at least 105 in every game except games against the Baltimore Ravens and Cleveland Browns, both of which were losses. In games when Burrow has a quarterback rating under 100, Steelers, Browns, Ravens, and Dallas Cowboys, the Bengals have suffered defeat. Their success as a team is strongly tied to the play of Burrow.

Historically, Burrow has not been amazing against Pittsburgh. His stat line against the Steelers is 913 yards, seven touchdowns, six interceptions, and a quarterback rating of 83.3. Burrow is 2-2 in his career against Pittsburgh, with his best game coming in week three of last season where he tossed three touchdowns on 18 passes including a deep bomb to Ja’Marr Chase right before halftime.

The Steelers will look not to have a repeat of that performance against them, but with Fitzpatrick questionable to play on Sunday afternoon due to having his appendix removed it will be tough. Fitzpatrick has a total of two interceptions in his career against Burrow, and has picked him off in their last two meetings.