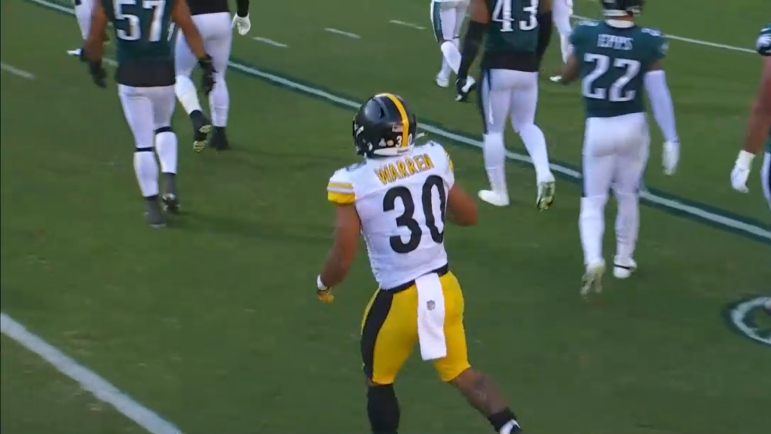 The talk offensively leading up to Sunday’s Week 10 matchup against the New Orleans Saints for the Pittsburgh Steelers has focused mainly on the interesting comments head coach Mike Tomlin made Tuesday during his weekly press conference regarding the division of labor and dynamics between second-year starting running back Najee Harris and backup undrafted free agent Jaylen Warren.

Tomlin, who stated he didn’t know to what degree — if any — that Harris’ lingering LisFranc injury is affecting his play, added that the Steelers would continue to give Warren more and more reps and let him have the opportunity to write his own script as a running back in the Steel City.

Najee Harris can't play like this. This isn't his style. Not how he wins. #Steelers pic.twitter.com/rfO1AX8VV5

Through eight games, Warren has been a more effective runner than Harris, leading to discussions regarding the division of labor entirely in the backfield. Days away from the match against the Saints though, Warren hasn’t seen an increase in practice reps or overall usage, he stated to reporters Thursday from inside the locker room at the UPMC Rooney Sports Complex.

“No, same reps,” Warren stated to reporters, according to video via the Pittsburgh Tribune-Review’s Chris Adamski. “Obviously, Najee is the main guy. I’m here to complement him.”

Jaylen Warren said he has NOT had any increase in reps or responsibilities this week in practice pic.twitter.com/onMfvKmVTt

The Steelers are not going to outright bench Harris or lessen his role entirely, at least not at this point in the season. They are obviously very committed to the former Alabama star, having spent a first-round pick on him in 2021 and later seeing him be voted a captain by Steelers teammates.

He hasn’t looked good to this point in the season though. From a counting stats perspective, Warren has been better, albeit in a limited role with much of his damage coming in garbage time in games.

The poor play has raised questions about Harris’ health and has also led to discussions about a potential change in the backfield. Tomlin made it sound like the Steelers are open to that.

“You know, to what degree, I don’t know,” Tomlin said regarding Harris’ previous injury to the media Tuesday on video from the team’s YouTube channel. “He’s playing and so obviously he’s healthy enough to play. I’ll let him speak to that, but both guys have been available to us. We’ve gotten some awesome contributions from Jaylen [Warren] and it’s reasonable to expect that to continue. I know like I mentioned when we were talking about a division of labor and who’s done what and who’s done what well, I know that was a topic of discussion and very evident in our tape review.”

“You know, he’s a quality back that’s made some plays,” Tomlin added regarding Warren. “We’ll keep giving him an opportunity to do so and maybe he’ll write that script.”

Warren has certainly earned the opportunity for more touches this season based on his play through eight games. But, despite Tomlin’s comments Tuesday and second-year offensive coordinator Matt Canada’s comments Thursday, it doesn’t sound like that increase in touches, reps and opportunities is coming, at least this week, for Warren.