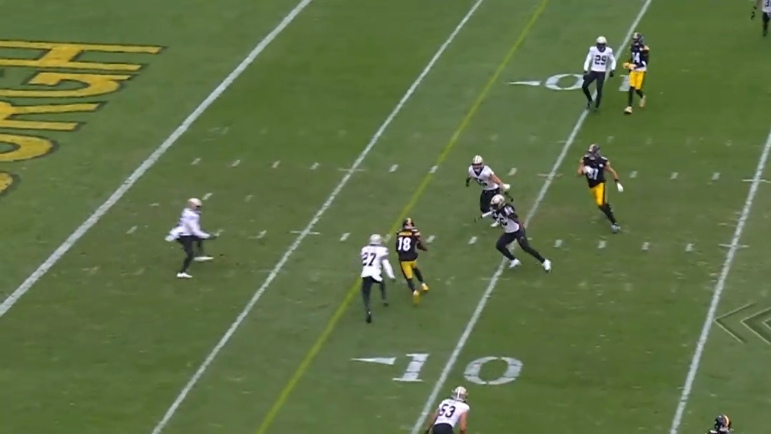 “We got a desire to find open space,” Tomlin said to the media Tuesday on video from the team’s YouTube channel. “I don’t know that it was anything unique to be quite honest with you relative to our regular intentions. It might be something that was born out of opportunity. They had, they had some corners go down in game and things of that nature, and they did some things differently as the game unfolded and provided more space in the interior portion of the field as they got into an umbrella, if you will.”

As Steelers Depot’s very own Alex Kozora pointed out in a film room after the game, the team finally started incorporating the middle of the field more in their Week 10 victory over the Saints after being a heavy “outside the numbers” passing team. Coming out of the bye week, Pittsburgh opted to make subtle changes like using more slants and more middle-of-field concepts to the offense rather than ground-breaking ones like firing coaches or benching starters in hopes of improving the offense.

Film Room: First There Was Fire (And Then There Were Slants)

The changes weren’t earth-shattering, but they did provide the offense with a breath of fresh air at a chance to use the middle of the field which has been heavily neglected in recent seasons and actually give receivers a chance to get YAC in space. While Tomlin was correct in saying that New Orleans had some injuries in their secondary and that the defense was more pressed to stop the running game that was successful throughout the contest, it was evident that the team took more of a concentrated effort to use the middle of the field more which yielded promising results.

The Steelers offense had been extremely bland, boring, and simple when it comes to the passing game with most routes focusing on underneath passes to the sideline or coming back to the ball rather than allowing yards after catch to be had. While the offense still has a long way to go to return to what it used to be at its heights back in 2015-2018, Sunday was a step in the right direction in terms of slowly opening up the offense and utilizing more of the field in the passing game. Hopefully this trend continues as Pittsburgh looks to finish the season strong starting with this coming week’s game against the Bengals in Cincinnati.