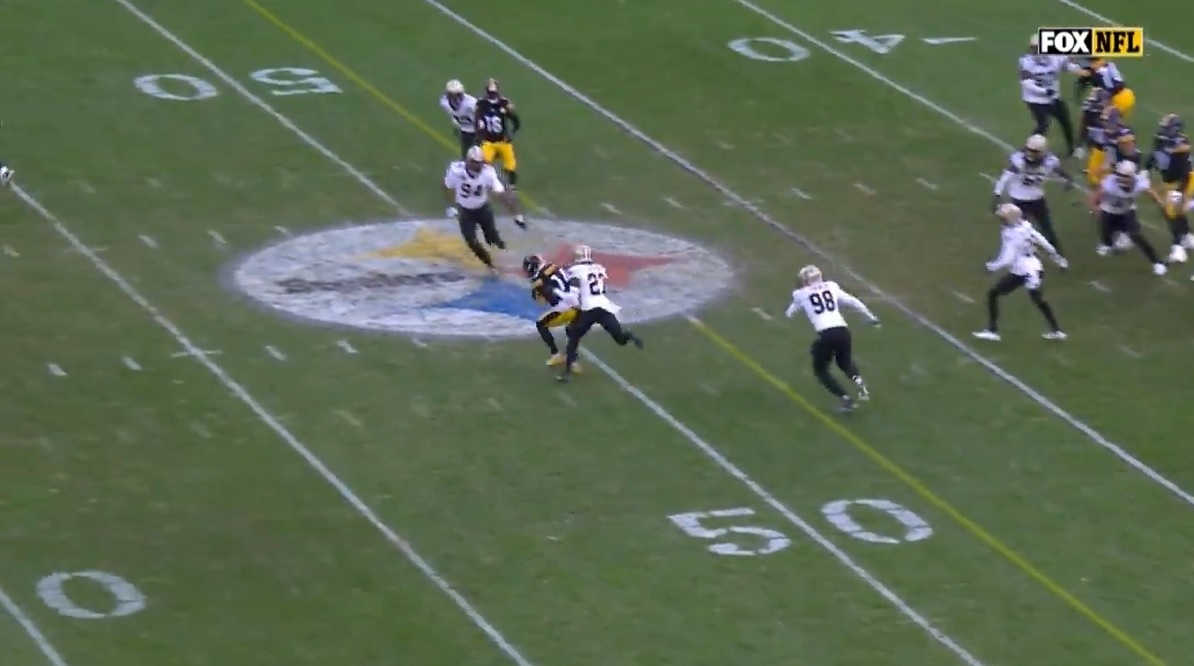 Hundreds of thousands of years ago, man discovered and harnessed the power of fire. And it changed the course of human history. Yesterday, the Pittsburgh Steelers discovered the ancient tale better known as the “slant” route. Maybe it’ll have the same impact.

For the first eight games of the year, the Steelers were a heavy “outside the numbers” passing team. Throws to the flat, comebacks, and out routes that offered little YAC for Pittsburgh’s big-play capable receivers.

While yesterday wasn’t a leap in the right direction, it was a step. Pittsburgh used the middle of the field more often and crucially, got their receivers in position to make plays after the catch. The smoke and burning embers to create a flame.

The first came on the Steelers’ opening touchdown drive. Second and ten out of empty with RB Najee Harris flexed out, something else that happened with more frequency coming out of the bye. A simple slant/flat concept with TE Pat Freiermuth running into the flat and Diontae Johnson running a slant.

Here, the linebacker expands and QB Kenny Pickett waits for Diontae Johnson to clear the window behind the linebacker. Johnson hits him and creates a YAC opportunity for Johnson to pick up the first down, avoiding third and short and giving the team a fresh set of downs. Good concept and execution.

Same idea later in the half. Harris flexed out with Freiermuth and Johnson running the slant/flat concept to the bottom. The LCB to the bottom is playing with outside leverage allowing Johnson space to run the slant. Beat, the corner grabs Johnson and knocks him off his route, drawing a flag for pass interference.

That was probably a wise defensive move. If Johnson catches that, he’s 1v1 with the free safety and that could’ve been an explosive play. Maybe even a touchdown. But it’s a sound and simple concept designed to get a YAC threat like Johnson in a position to succeed.

Last one. Gotta have it moment. 3rd and 3, tie game. Different look here than the two above. 2×2 formation out of 12 personnel. George Pickens to the bottom against the RCB. Saints try to bluff pressure with the ROLB dropping out but Pickens is on the slant and clears him over the top. Pickett makes one of his best throws of the day to hit Pickens on the money over the middle in a tight window where the cornerback can’t rally and make the play.

Pickens hangs on and the Steelers move the sticks with about five yards of YAC here. It isn’t a ton but it’s more than what Pittsburgh had been giving their guys. Heading into this game, Pickens had been averaging just two yards after the catch.

Exiting the bye, Pittsburgh didn’t make sweeping changes. Those are generally hard to do midseason, even with the off week, and often come with unintended consequences. But they seemed to make several smaller tweaks. More pistol to create a downhill, North/South running game. Flexing Harris out in space for a couple more empty looks. Perhaps tightening up the early down snaps between Harris and Jaylen Warren. And adding these slants and more middle-of-field concepts to the offense.

Add better execution on top of all of that, always the most important thing, and you get a more effective offense. Still work to do, they’ve yet to break through that 20-point ceiling. To accomplish that, Pittsburgh will have to improve their red zone play (2 of 5), cut down on sacks (six allowed in each of the last two games), and hit their field goals (Matthew Wright had two misses Sunday).

But man didn’t go from fire to modern-day society in one swoop. Discovering what’s available to you is the first step. Pittsburgh’s offense isn’t on fire. But there’s a little smoke. And it’s the first truly positive sign of life I’ve seen all season.