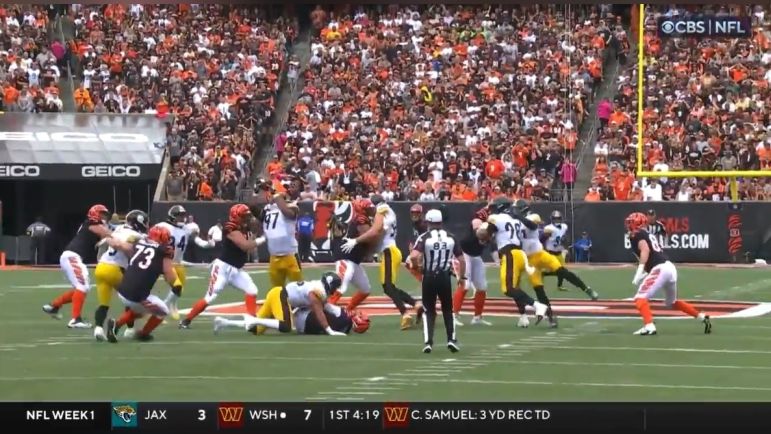 Joe Burrow threw a career-high four interceptions in Week One against the Pittsburgh Steelers. Cam Heyward wishes it was five. It nearly was but the scorers that game concluded a sack/forced fumble instead of an interception, giving Heyward a fumble recovery as opposed to his third career pick.

Heading into the rematch against the Cincinnati Bengals, Heyward hasn’t forgotten that moment.

“I was mad we didn’t make five picks,” he told reporters via Steelers.com Thursday. “I was thinking that one was for me.”

Pittsburgh’s defense harassed Burrow all game long. From the very first snap, Heyward picked up his first sack of the season with Minkah Fitzpatrick pick-sixing Burrow the next play. Later in the game, Highsmith came around the edge and knocked the ball out of his hands, recovered by Heyward. But because it was ruled a fumble, there was no pass and thus, no interception.

It would’ve been the third pick of his career after his interception in the 2020 opener against the New York Giants and one last year versus the Chicago Bears. Heyward’s done his best to get hands in throwing lanes this season but has seen unlucky results, just one pass deflection all season and none since Week Two. He had nine last year.

Yesterday, Burrow vowed not to have an encore performance this Sunday. Something that could look like bulletin board material but a veteran like Heyward doesn’t need the extra motivation.

It’ll be Pittsburgh’s mission to try. It’s a different Steelers’ defense when T.J. Watt is on the field and they should be able to generate a pass rush like they did in Week One. Maybe not to the degree of seven sacks but more than they did without him. Burrow and the Bengals have already been sacked 30 times this season, among the most in the league, and despite repeated upgrades to the line, the results haven’t been there.

A win over the Bengals would put the Steelers at 4-6 and reopen playoff conversations that were dead in the water two weeks ago. Pittsburgh would still have a challenging path and would need to go no worse than 5-2 over the next seven games, a slate that’d include three more AFC North contests, but the Steelers have climbed out of holes before and turned their season around. It makes this weekend a pivotal moment in Pittsburgh’s season.