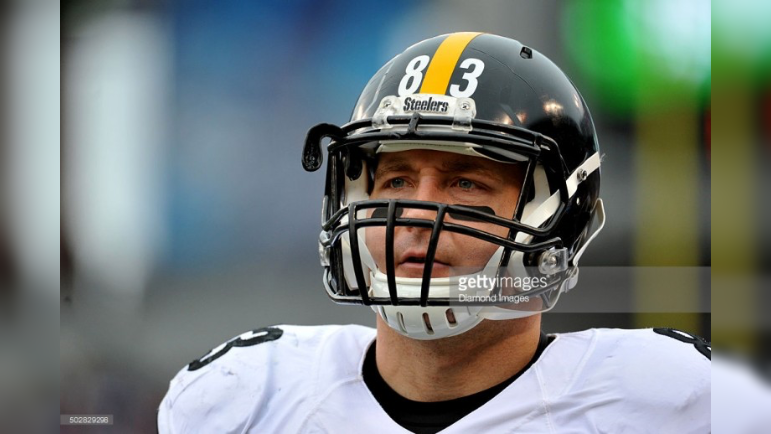 In his 11-year career with the Pittsburgh Steelers, one thing was always certain with tight end Heath Miller: how consistent and reliable he was day to day.

On the field under the bright lights, Miller was a phenomenal dual-threat tight end, serving as a great in-line blocking tight end for the black and gold while also developing into one of the most consistent and reliable pass catchers Ben Roethlisberger ever had during his tenure with the Steelers.

That showed in the numbers Miller accumulated during his 11-year career. In his 168-game career with the Steelers after being a first-round draft pick at No. 30 overall in 2005, Miller hauled in 592 passes for 6,596 yards and 45 touchdowns, quickly becoming one of the key cogs in the engine that was the Steelers’ offense for the decade-plus.

His 6,596 receiving yards puts his fourth all-time in Steelers’ history, while he sits third all-time in receptions and fifth in touchdowns.

A lot of the production Miller put together in games can be traced back to the dedication to his craft he displayed in practice throughout his time in the NFL. Appearing on the latest episode of Footbahlin with Ben Roethlisberger, Miller and Roethlisberger shared stories about their time together in the black and gold.

Roethlisberger was quick to praise Miller for his dedication and commitment to each and every rep in practice, which made him such a great playmaker on the field when it mattered most, sharing a hilarious story about the way Miller reacted in practice to dropping passes, which rarely — if ever — happened.

In his career, Miller was targeted 825 times, catching 592 of the passes thrown his way for an impressive catch percentage of 71.8% for his career. He rarely dropped passes and often made incredibly difficult catches through contact in traffic. According to Pro Football Focus, Miller had just 37 career drops — including playoffs — in his 11 year career, which totaled 183 games.

When the rare occurrence would happen in practice though, Miller would get made in the only way the quiet, reserved one could, taking the onus on himself to be better, no matter how difficult the catch would have been.

“When he would drop a pass in practice, it was like a record scratch,” Roethlisberger said regarding Miller, according to video via the Channel Seven YouTube page. “It was so rare. He didn’t even drop balls in practice. Never. He would get so mad. He would drop one ball every other week, maybe longer.

“It would be a catch where he’d get like one hand on it, and he’d get so mad. I’d be back there laughing. He’d be so mad, slamming the ball and saying ‘my bad, Ben.’ Heath, you got one finger on it. It was a horrible pass.

“He would be so mad and I would just laugh. That’s just who he is. He cared so much about everything, even practice.”

That really is who Miller was as a player, that quiet, consummate professional. One that was dedicated to perfecting his craft and going about it the right way, putting his head down and going to work each and every day.

In large part, that’s why the city of Pittsburgh and the Steelers’ fanbase fell in love with him right away. He was that blue collar guy, one that wanted to get it right the first time and really took everything seriously.

That played out on the field every time he stepped between the white lines too, and helped him earn a spot in the Steelers’ Hall of Honor.