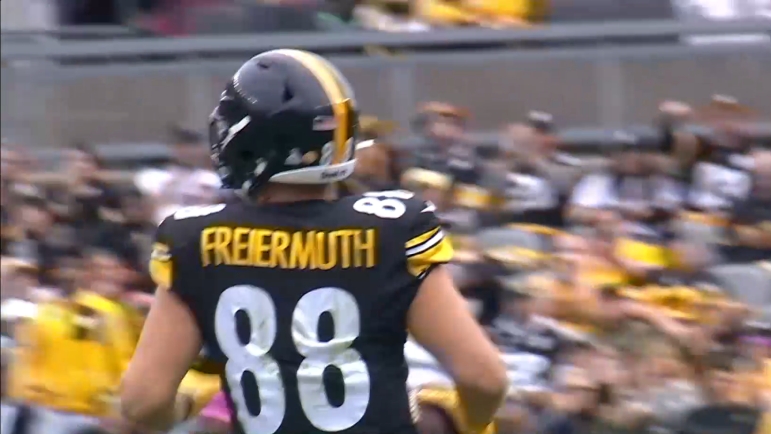 With the Pittsburgh Steelers trading away slot receiver Chase Claypool to the Chicago Bears prior to the NFL’s trade deadline, one of the biggest potential beneficiaries in terms of targets and increased opportunities is tight end Pat Freiermuth. Claypool and Friermuth oftentimes both operated around the middle of the field, so with Claypool gone, there’s a chance that Freiermuth sees an uptick in work. The second-year tight end isn’t worried about that though and said he’s just focused on helping the team win.

“I don’t really care about the extra targets or numbers or the stats or anything like that. I just want to do anything I can to help make the team win. If that’s me catching the ball more, making more in the middle of the field, then I’m gonna do that,” Freiermuth said today in a video posted to the team’s website.

When given the opportunity this season, Freiermuth has taken advantage of it. When receiving five or more targets, he’s generally been effective. In Week 1 against the Cincinnati Bengals, he had 10 targets which he turned into five catches for 75 yards, while he had four catches for 22 yards and a touchdown on seven targets in Week 2 against the New England Patriots. He had seven catches for 85 yards on nine targets against the New York Jets, and in Week 7 against the Miami Dolphins, he contributed 75 yards on eight catches with nine targets. Finally, against the Eagles in Week 8, Freiermuth had four grabs for 57 yards on seven targets. In games with at least five targets, he has at least 50 yards in all of them except Week 2 against the Patriots, but he scored his lone touchdown of the season in that game.

It’s easy to say that the more targets a guy gets, the better he’s going to be, but Friermuth has taken advantage of getting more targets than Claypool was (he only went over 50 yards on 5+ targets twice), and while some of that can be blamed on the route tree, more targets and looks to Freiermuth are something that I think will be beneficial to this offense. The Steelers’ offense has been rather lifeless through their first eight games, and maybe throwing to a big, reliable target in Freiermuth to pick up chunk yards can be a way for the offense to gain some momentum and pick up some steam.