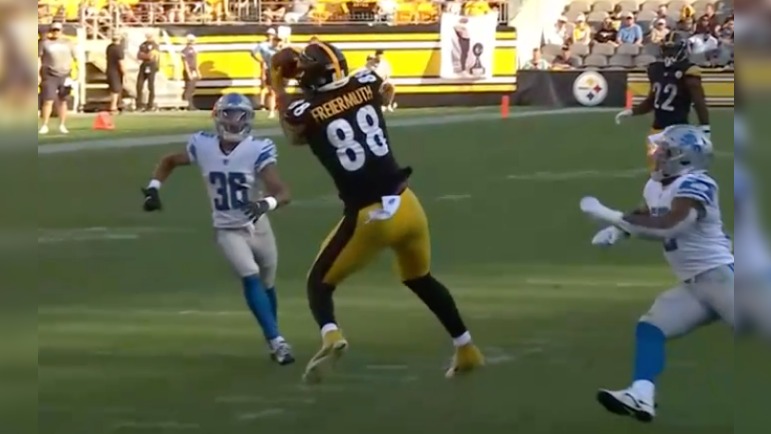 When Tomlin was asked about how the team will look to make up for the loss of WR Chase Claypool and what he brought to the team, Tomlin again mentioned his comfortability with the guys they have to work the middle of the field from the slot, particularly one big-bodied pass catcher that shares similar qualities to Claypool who just left town.

“I don’t know that it does as I mentioned,” Tomlin said to the media Tuesday regarding how the state of passing games changes with no Claypool on video from the team’s YouTube channel. “It’s not just the depth of the position that we’re comfortable with in terms of making that move, but just the space in the field where Chase [Claypool] had made a lot of plays for us also is the space of the field where Pat Freiermuth makes a lot of plays for us. And so, it’s reasonable to expect him to get continually highlighted in that area as well.”

Tomlin mentioned just one day after the trade deadline passed that he was comfortable with the playmaking ability inside the slot to make the trade of Chase Claypool to the Chicago Bears for their second-round pick in the 2023 NFL Draft. Tomlin not only mentioned the wide receivers as potential good fits there, but also mentioned Freiermuth by name as a key part of their passing game inside, reiterating his comments from today about the second-year TE out of Penn State.

Freiermuth has been a great security blanket option for the Steelers since getting drafted last season, serving as a reliable check down option and red zone threat for Ben Roethlisberger last year, but has since expanded his route tree and allow him to work more downfield, taking his YPR from 8.3 in 2021 to 11.5 so far in 2022.

Currently, Pat Freiermuth has 32 receptions for 367 yards (11.5 YPR) and one TD in 2022. He missed Week 6 with a concussion, but has been fairly productive from a yardage standpoint, having three games at or above 75 yards, a mark in which All-Pro TEs Travis Kelce and Mark Andrews have more.  Should Freiermuth’s target share increase due to the loss of Claypool in the slot as well as the trend of working down the field more continue, it’s entirely possible that we see his production notably increase down the stretch as he and rookie QB Kenny Pickett continue to develop more chemistry together.

Will TE Pat Freiermuth See His Production Improve After The Chase Claypool Trade?