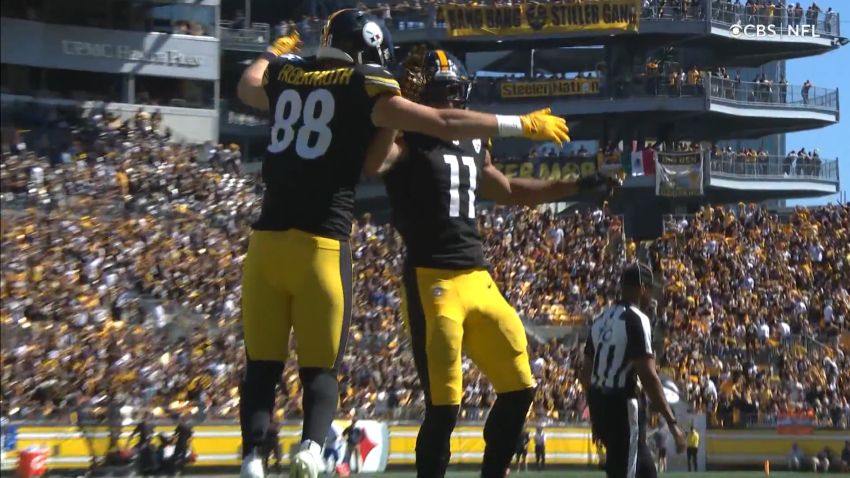 The Pittsburgh Steelers set their price on WR Chase Claypool prior to the trade deadline, and the Chicago Bears were willing to meet that price, sending a second-round pick to Pittsburgh in-exchange for the third year wideout. The return for Pittsburgh was a value they simply couldn’t turn down after seeing Claypool’s production and on-field impact drop from a promising rookie season when he scored 13 total TDs including the playoffs.

Now, Pittsburgh gets to hit the reset button with an asset that may surpass the initial investment of the 49th overall selection in the 2020 NFL Draft. Still, the Steelers will have to overcome Claypool’s loss on the field, specifically in the slot and over the middle of the field.

WR Steven Sims appears the be the next WR that will step up in the slot after running there in practice and having fellow WR Diontae Johnson credit him for looking good there along with HC Mike Tomlin stating he could fill in there. While Tomlin mentioned that they have a few receivers that are inside capable to help overcome the loss of Claypool, he also specifically mentioned TE Pat Freiermuth as being a significant component of our attack on the interior portions of the field.

Currently, Pat Freiermuth has 32 receptions for 367 yards (11.5 YPR) and one TD in 2022. He missed Week 6 with a concussion, but has been fairly productive from a yardage standpoint, having three games at or above 75 yards, a mark in which All-Pro TEs Travis Kelce and Mark Andrews have more.

Most games with 75+ receiving yards this season among TEs:

Freiermuth has shown to be a reliable target over the middle of the field for QB Kenny Pickett, garnering 48 targets in seven games played which is second on the team now that Claypool has left town. Each time Freiermuth has reached nine targets, he has matched or surpasses 75 receiving yards, suggesting that we could see a few more strong performances from Freiermuth down the stretch if his target share increases to help fill the void that Claypool leaves in the offense.

While the touchdowns haven’t been there for the offense as well as Freiermuth compared to last season, Freiermuth’s efficiency has notably improved in terms of his usage down the field. He’s averaging three yards more per reception and has been a go-to target for both Pickett and Mitch Trubisky down the seam.

One thing the Steelers' offense is doing right. Getting Pat Freiermuth down the field.

As a rookie, he averaged 8.3 YPC and had just two receptions of 20+ yards.

Should Freiermuth’s usage down the field continue and his target share just slightly increase with Claypool gone, there is a good chance that we could see Freiermuth’s numbers spike in Pittsburgh’s final nine games this season. The current state of this offense may cap his ceiling, but if Freiermuth experiences some positive TD regression, there’s no reason to think that he can’t finish near the tops of the league in terms of production at the TE position behind bonafide studs like Kelce and Andrews.

What are your thoughts on Pat Freiermuth? Do you think the trade of Chase Claypool will positively affect his production? What is a realistic expectation for Freiermuth’s end of season stats? Please leave your thoughts in the comments section below and thanks again for reading!