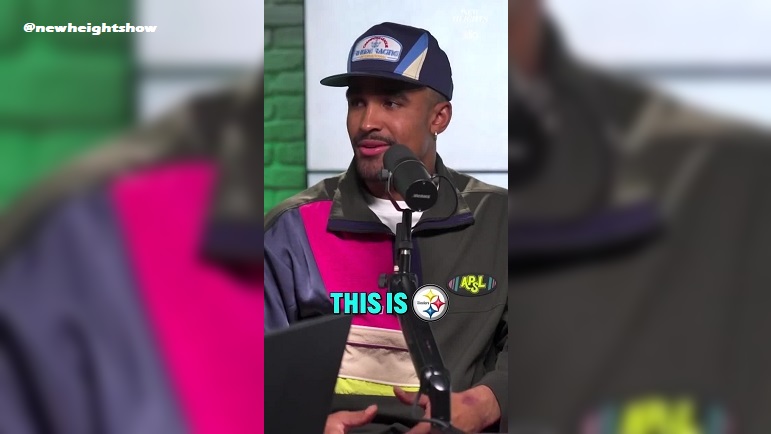 Jalen Hurts is one of the NFL’s breakout stars. Leading the Philadelphia Eagles to an 8-0 record, Hurts has had a fantastic season with his arm and his legs. The Pittsburgh Steelers witnessed it first-hand in their Week 8 loss, watching Hurts fire four touchdowns in a convincing victory.

But to hear Hurts tell it, he expected to be playing on the west side of the Keystone State. Appearing on the popular New Heights podcast hosted by Jason and Travis Kelce, Hurts said he thought Pittsburgh would be calling him on draft night.

It was the 2020 NFL Draft and for the first time in over 50 years, the Steelers didn’t have a first-round selection. They had traded that to the Miami Dolphins in 2019 for Minkah Fitzpatrick, ultimately one of the best deals Kevin Colbert ever made. Pittsburgh’s first selection was 49th overall. With an aging Ben Roethlisberger coming off a serious elbow injury, it certainly was logical for the Steelers to have interest in the position. So when Hurts’ phone rang, he thought it’d be Mike Tomlin on the other line.

“So when I saw PA [on my phone] I’m like, ‘oh, here’s Pittsburgh. This is Pittsburgh.’ I didn’t know what to expect.”

But it was Eagles’ GM Howie Roseman on the phone. The Steelers passed on Hurts, using the 49th pick on WR Chase Claypool instead. Four picks later, Philadelphia nabbed Hurts and the rest is history.

Fast forward two years and Hurts is one of the league’s top young quarterbacks, commanding an Eagles’ team considered to be Super Bowl contenders. The Steelers traded Claypool away last week, netting a strong second round pick in return, but an admission of a pick that didn’t work out the way the organization hoped.

Pittsburgh had all the right reasons to draft a quarterback. And as Mike Tomlin recently revealed, former Alabama teammate Minkah Fitzpatrick made a hard push for the team to draft Hurts. But the Steelers bet on winning with Roethlisberger instead of replacing him, a move that ruffled feathers in 2018 when the team traded up to select QB Mason Rudolph.

In theory, had Colbert traded a first round pick for Fitzpatrick and then used a second-round pick on Hurts, it would’ve been one of the best one-two combinations in recent draft history. Instead, the team will have to hope Colbert’s final first round choice, Kenny Pickett, will be their franchise guy instead.

Check out the full clip below.

"I thought I was going to Pittsburgh … from the interview I didn't think I was going to be an Eagle" 👀@JalenHurts spoke about his draft night experience for the first time with @JasonKelce and @tkelce pic.twitter.com/KlKI9ASTSq