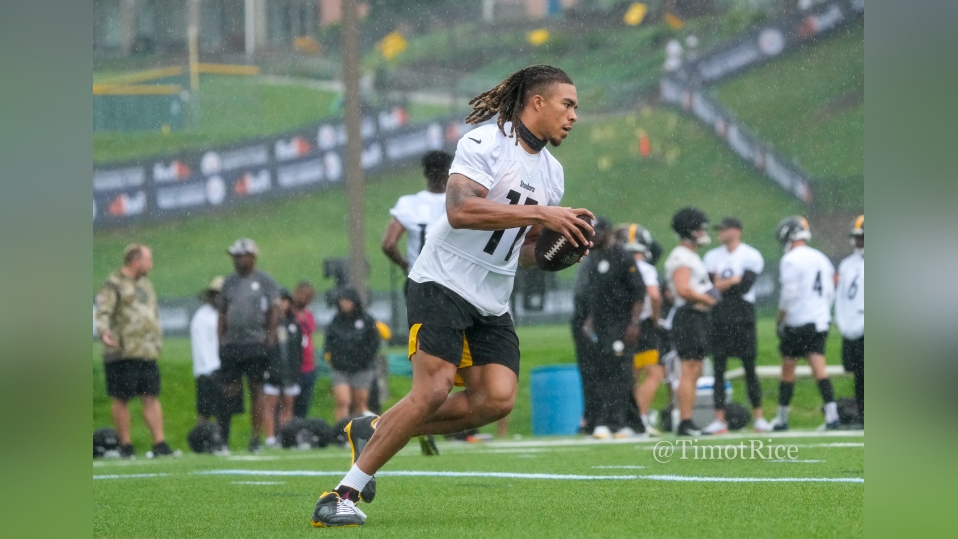 While the focus is on the football aspect of today’s trade that sent WR Chase Claypool to the Chicago Bears, there’s a personal aspect that’s easy to overlook too. Claypool was drafted by the Pittsburgh Steelers, spent three years in the city, and certainly had his fair share of big moments, especially during his rookie year. Now moving on to a new team, Claypool tweeted a goodbye and thank you to Steelers’ Nation and city of Pittsburgh.

Here’s what he tweeted out moments ago.

I will always have an unbelievable amount of love for Steelers Nation and the organization that drafted me out of Notre Dame. I am beyond grateful for the amazing people in Pittsburgh for embracing me & the lifelong memories made. Now… Back to business in the Midwest. 🐻⬇️ pic.twitter.com/jCeHL1CBQ8

“I will always have an unbelievable amount of love for Steelers Nation and the organization that drafted me out of Notre Dame. I am beyond grateful for the amazing people in Pittsburgh for embracing me & the lifelong memories made. Now… Back to business in the Midwest.”

A classy goodbye. Pittsburgh drafted Claypool in the second round of the 2020 NFL Draft, the team’s first selection that year after sending their first rounder to acquire safety Minkah Fitzpatrick. Claypool was a height/weight/speed marvel coming out of college and the Steelers were impressed by his well-rounded ability.

“He’s big, he’s fast, he’s strong, he’s physical. He can make a contested catch. Again, when a player like that is available, it was easy,” then-GM Kevin Colbert said after taking Claypool.

The team also noted his blocking ability and desire he showed at that year’s Senior Bowl also led the Steelers to draft him. Claypool produced an immediate return on that investment, having a strong rookie season. His 62 receptions set the franchise record for a rookie and he found the end zone 11 total times, nine receiving and two rushing, including a four touchdown performance against the Philadelphia Eagles. But he regressed the next two seasons, far too inconsistent in 2021 while being in the headlines for the wrong reasons. Statistically, some of his numbers looked similar but his touchdowns tanked and he wasn’t the same impact player. Pittsburgh moved him to the slot this season but Claypool didn’t fare better. His average plummeted from over 14 yards to under ten while he had found the end zone just once this season.

With rumors swirling about him, the Steelers sent him to the Bears for a 2023 second round pick, an offer too good to pass up on. Claypool will try to become one of Chicago’s top weapons and as he noted, headed back west close to where he played college football.

Claypool’s Steelers’ career ends with 153 receptions for 2044 yards and 12 receiving scores while carrying the ball 32 times for two more touchdowns. He also threw one touchdown pass. That came in his final game as a Steeler, hitting FB Derek Watt in the flat on 4th and goal in Sunday’s loss to the Philadelphia Eagles.

UPDATE (9:50 PM): Claypool also sent out this tweet with photos of his last day as a Steeler.

Last day with the boys.. I appreciate you all 💛🖤 pic.twitter.com/5GHasQ5vAM