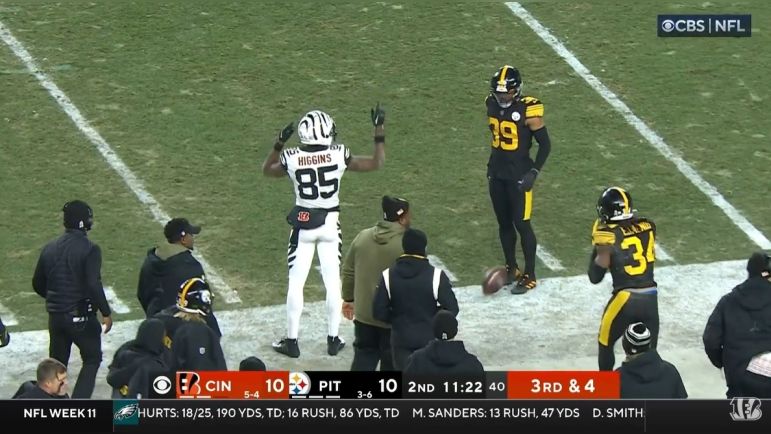 If the Pittsburgh Steelers ever have a third stadium name change, it might as well be called Tee Higgins Stadium. Sorta has a ring to it. Because Higgins owned that space Sunday evening.

Though it was RB Samaje Perine who notched three receiving touchdowns, it was Higgins – the team’s #1 receiver with Ja’Marr Chase out – who was the catalyst for the offense getting into striking distance. Higgins finished the day with nine catches for 148 yards on just 13 targets. The only thing he didn’t do was find the end zone but make no mistake, the Steelers had no answer for Higgins.

Talking with reporters after the game, CB Levi Wallace explained his impact.

“I think they do a great job of scheming him to get open,” Wallace said via a team transcript. “Not giving us the same looks, different routes when they do show the same looks. So, he’s a good player. Good players make good plays.”

Higgins made plenty of good plays on Sunday. He was a consistent threat, averaging over 16 yards per grab with his longest going for just 33, meaning he routinely carved up the secondary as opposed to making one splash play. But that 33-yard grab was a key one and came versus Wallace, running a fade down the right sideline and putting the Bengals into goal-to-go territory. Trenton Irwin finished off the drive with a touchdown, one of the Bengals’ three red zone scores in their perfect day inside the 20.

It wasn’t just Wallace that Higgins toasted. He did his damage across the entire Steelers’ secondary. Wallace and slot corner Arthur Maulet appeared to be the tow biggest victims, the Bengals taking advantage of the size mismatch in the slot – Higgins at nearly 6’4, Maulet at…definitely not that – that allowed for a handful of easy completions.

Higgins didn’t record his first reception of the day until there were under 12 minutes to go in the second quarter, meaning he did his damage in less than 45 minutes. His first grab went for 24 yards, a crucial 3rd and 4 pickup to give the backed-up Bengals’ offense breathing room and leading to a touchdown drive that gave Cincinnati a 17-10 lead. Higgins had four catches on the drive.

He’s the first receiver to have a 9+ catch, 140+ yard performance against the Steelers since Eagles’ flash-in-the-pan Travis Fulgham did in 2020. Pittsburgh has their biggest struggles against bigger receivers, the height/weight matchup problems as opposed to smaller and shiftier receivers. They can (relatively) minimize Tyreek Hill and Jaylen Waddle. They struggle much more with the likes of Higgins and A.J. Brown.

Higgins didn’t just help the Bengals win the game but end the Steelers’ season. At 3-7, their worst start in 19 years, there’s no hope of this team turning things around.