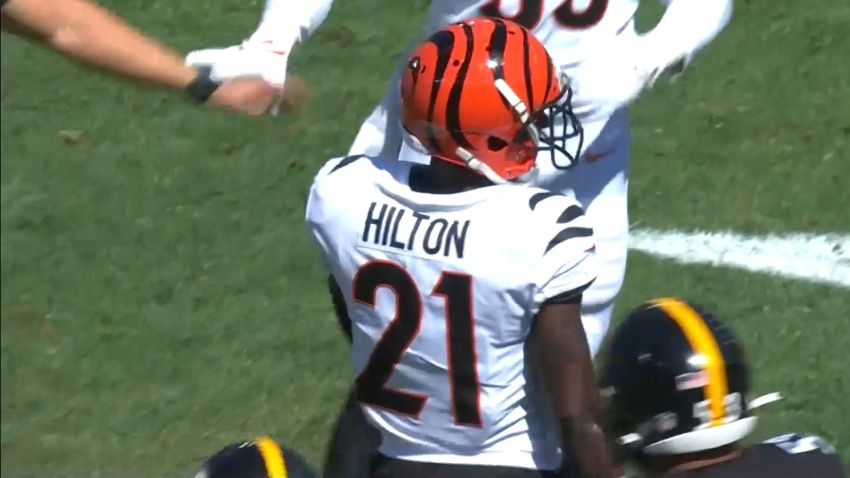 While the Pittsburgh Steelers still don’t have to worry about them for nearly another two weeks, the Cincinnati Bengals are looking to get themselves right following a rebound blowout victory over the Carolina Panthers on Sunday. That includes getting healthy.

Former Steelers cornerback Mike Hilton missed that game against the Panthers, and as it turns out, for good reason. Speaking to reporters yesterday, he confirmed that he had surgery to repair a pinky finger that had broken in three places the week before in a loss to the Cleveland Browns.

Hilton had four tackles in that game, but only logged 64 percent of the snaps. He is averaging nearly three-quarters of the Bengals’ snaps played so far this year, and he averaged 71% last season in his first year with the team (he never hit over 62% in his four years in Pittsburgh).

He told reporters that the surgery occurred a week ago on Tuesday, the day after the Monday night loss to Cleveland. He blamed the “short turnaround” and risk of possible reinjury for him missing the Panthers game but has no doubt he will be ready to face his former team coming out of the bye, via Richard Skinner of WKRC.

Originally signed as a safety out of Ole Miss by the Jacksonville Jaguars in 2016, he didn’t last long there before spending a brief period of time on the New England Patriots practice squad. He finished out that season on the Steelers practice squad and won the starting nickel cornerback spot by opening day of 2017.

He never looked back after that, recording 59 games during his four seasons in Pittsburgh. He registered 237 tackles during that time with 30 tackles for loss, seven interceptions, 32 passes defensed, three forced fumbles, five fumble recoveries, and 9.5 sacks. He carved out a reputation for physicality and being a complete player in the slot, which he knows has something to do with his hands.

“I just have to work and try to get that range of motion back and just try to strengthen (the finger) especially knowing how I use my hands tackling-wise”, he said. “I have to still be able to be myself and go out there and compete”.

In part due to the salary cap crunch of 2021 stemming from the loss of revenue from the COVID-19 pandemic, the Steelers struggled to re-sign many of their key free agents. He signed with the division-rival Bengals on a lucrative contract and had a strong first season with the team, which include the first pick-six of his entire football career—coming off of the Steelers’ Ben Roethlisberger.

Thus far this season with the Bengals, Hilton has recorded 36 tackles, including three for loss, along with three passes defensed. He has yet to record a sack wearing the tiger stripes, but Cincinnati doesn’t send him on blitzes nearly as much as the Steelers did.

He registered nine combined tackles and the pick-six in two Bengals victories over the Steelers last season, first 24-10 and then 41-10. Earlier this season, Pittsburgh got the better of his Bengals in the opener in a game in which he recorded seven tackles and a quarterback hit.