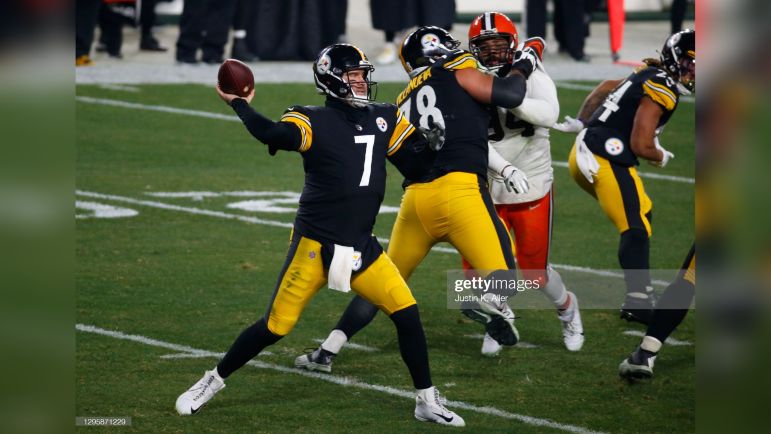 In the 2004 NFL Draft, the Cleveland Browns and nine other teams decided to pass on future Hall of Fame QB Ben Roethlisberger. Being a kid that played college football in Ohio, and was also raised there, it has always been some sort of a shock to him. The Browns have struggled to find a quarterback of Ben’s caliber since then, as it seems to haunt the franchise every year. When he was asked about the possibility of being drafted by the Browns, he didn’t hold back.

“I thought for sure I’d have a chance to go there”, Roethlisberger said on the most recent episode of his Footbahlin’ podcast, “Glad I didn’t! I thought I was and when they didn’t, I was like really? I’m [from] Ohio and you have a chance to take me, and you didn’t? Alright I’ll beat you thirty-something times.”

Big Ben never holds back when he talks about his hometown team passing him in the draft, and quite frankly it makes for some good soundbites. Roethlisberger had an astonishing record against the Cleveland Browns, going 26-2-1 in the regular season, while throwing 43 touchdowns. I think it’s safe to say the Pittsburgh Steelers made the right call on that franchise-shifting day back in 2004.

Another crazy statistic is Roethlisberger used to have the record for the most wins in First Energy Stadium. Ben accumulated eleven wins in Cleveland during his career, which was more than any Browns QB before Baker Mayfield finally broke that record in 2020. How many QBs have had that much success in an opposing teams’ stadium? You can add that to the list of reasons the why the Browns probably still regret taking a tight end (Kellen Winslow) sixth overall over Roethlisberger. While Winslow went on to have a decent career in the NFL, it’s one of the worst decisions in Browns history.

“Yes, I was at one point the most winning quarterback at the Cleveland Browns stadium,” Roethlisberger said while laughing, after being asked about the infamous record he once held, “That’s a pretty cool feat, might put that on my wall.”

Even though it seems like this could be a rough season for the Pittsburgh Steelers, it’s always nice for fans and Ben Roethlisberger to laugh at the Cleveland Browns when the opportunity presents itself.