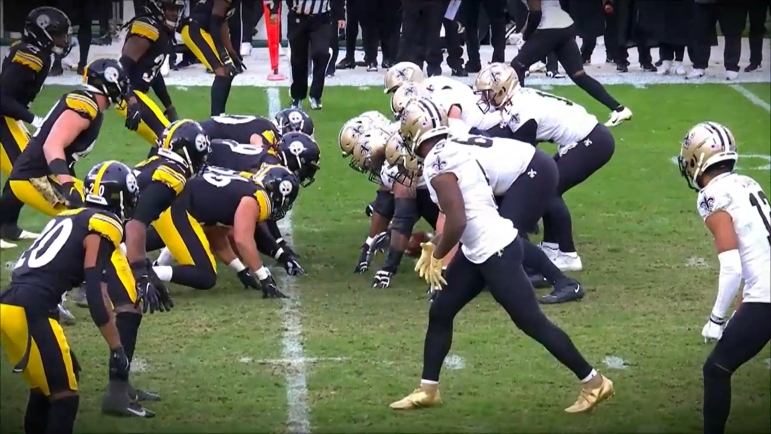 It all sounds so simple, yet it’s often extremely hard to execute at the highest level of football, that being assignment sound football, especially defensively.

Leading up to the bye week in Week 9 for the Pittsburgh Steelers, playing assignment sound football, especially against the run, was often a challenge.

Too often, guys were in the wrong gap, slow to get off blocks, or just got beat, opening rushing lanes for running backs to exploit. Oftentimes, teams were able to run the football at will, closing out games in a physical style that was demoralizing for the Steelers.

Coming out of the bye week though, that seems to have been corrected — at least for the time being — as the Steelers defense shut down the New Orleans Saints in Week 10 at Acrisure Stadium, holding the Saints to just 29 rushing yards on 15 carries, taking away the likes of Alvin Kamara and Taysom Hill in the 20-10 win.

For team captain and defensive leader Cameron Heyward, the improvements defensively against the run were nothing groundbreaking. Instead, the Steelers simply played assignment sound football, got off blocks and rallied to the football.

“Just assignment football, guys in the right gaps, guys getting off blocks, and it took more than one guy getting to the tackle,” Heyward stated to reporters Thursday during his weekly media session, according to video via Steelers.com. We understand we’re not gonna play perfect football, but when we do, it’s about guys getting off blocks and covering up those mistakes.

“…It’s about guys just understanding that we gotta be better when we’re out there.”

It all sounds so simple, yet it’s very hard to do. Make no mistake about it: the Steelers are quite capable of doing that consistently, especially with T.J. Watt back in the fold. Executing it though snap after snap, week by week is rather difficult.

Popping in here after starting to watch last night's game. Sure there was more bad than good from this team but I'll never get tired of watching Cam Heyward play football. Discards the LG for this 4th down stop. #Steelers pic.twitter.com/j7qgB0Dmqa

But, when the Steelers put an emphasis on something like the run defense, things tend to turn around rather quickly.

Last season, the Steelers had serious issues stopping the run, much of which could be attributed to the loss of Stephon Tuitt and Tyson Alulau along the defensive line, and the underwhelming play from Devin Bush and Joe Schobert inside.

Once Watt went down this season, the defense as a whole took a step back and struggled to do much of anything correctly, leading to games from the Browns, Patriots and Jets that saw them run the football at will on the Steelers, especially in the second half.

That wasn’t going to happen against the Saints, based on head coach Mike Tomlin’s comments regarding Kamara and Hill entering the matchup. To the Steelers’ credit, the defense stepped up in a major way in Week 10 and completely shut down the Saints’ offense, making them one dimensional in the second half, allowing Watt, Alex Highsmith and the rest of the Steelers’ front to pin their ears back and get after Andy Dalton.

The formula that worked against the Saints will need to work in Week 11 against the Bengals if the Steelers want to have a shot at defeating Cincinnati for the second time this season.