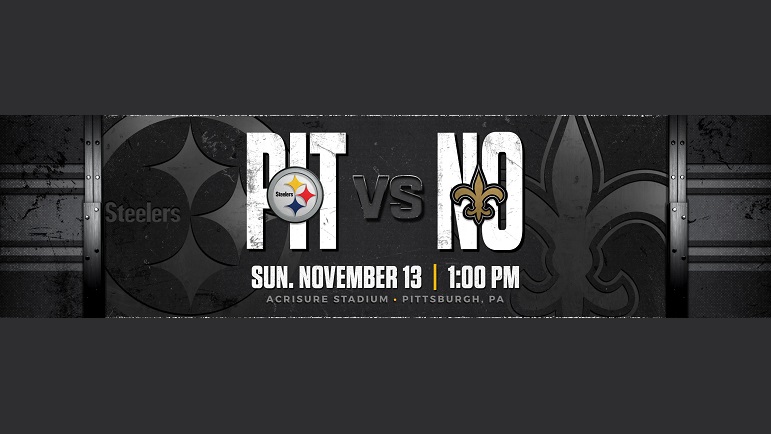 Coming off their bye, the Pittsburgh Steelers will host the New Orleans Saints at Acrisure Stadium.  The Saints last played on Monday night and now find themselves on the road on a short week.

The big storyline will be the return of TJ Watt who said he doesn’t expect to be on a pitch count. Unfortunately, the full defense will not be intact because Minkah Fitzpatrick had an emergency appendectomy. That should hold him out for about 3 weeks. He started reporting some discomfort on practice on Friday before being diagnosed with appendicitis. So Damontae Kazee and TJ Watt are back, but Minkah Fitzpatrick is out for a while now. It has been that kind of season for the Steelers this year.

Thank you for joining us on the Steelers Depot live game thread. Refresh this page throughout the game for curated tweets, video highlights, and live updates. Also, join the discussion by scrolling to the comment section at the bottom of the screen.

2022 Week 10 Steelers Vs Saints – What To Watch For https://t.co/jZB5mtugFR #Steelers pic.twitter.com/X8NrAa4Pip

T.J. Watt and Minkah Fitzpatrick have been on the field together this season for just 64 snaps.

Was really hoping on seeing both of them out there today. Gonna be a couple more weeks instead. #Steelers

Davenport and Maye being down for the Saints in addition to the guys we already knew would be out for them (two starting OL, leading tackler) is absolutely huge. https://t.co/V7uymraXd4

Saints' offense. Defense has to minimize WR Chris Olave and RB Alvin Kamara. Roll/bracket coverage to Olvae, maybe 2 Man on third down, don't let him get vertical. Kamara, I'd blitz ILB to force him to pass pro. He's checkdown/leak out threat.

Saints o-line missing starting LG and C and shuffling guys around. Team didn't do great job handling stunts even before the injuries. Think you see Heyward and Highsmith run a ton of games today. And of course, Watt's return is massive.

Secondary mixes coverages well and play lot of split field coverages. Watch post-snap rotation. Pickett has to be able to read and process. Saints just two INTs all year but both from Honey Badger. He can't dominate this game. Worried he's going to make plays.

The Steelers lose the coin toss and will get the ball first at home.

On 1st down, Kenny Pickett targeted George Pickens, but the pass fell incomplete. Pickett missed Pickens a little behind him. On 2nd down, Pickett passed to Gunner Olszewski who picked up 4 yards on a pop pass. 3rd and 6, the Steelers avoid the three-and-out with a 14 yard completion to George Pickens.

Here is the Pickett to Pickens 3rd down conversion #Steelers pic.twitter.com/jmJwksMjrd

On 1st down, Najee Harris got the handoff and rushed for about 3 yards up the middle. On 2nd, Pickett rolled out to his right and threw the ball away. On 3rd, Pickett tried to squeeze one in to Freiermuth at the sticks, but the pass was broken up.

On the first defensive play, TJ Watt and Cameron Heyward combined for the tackle for no gain. On 2nd down, TJ Watt stuffed Taysom Hill for no gain. On 3rd and 13, Andy Dalton’s pass went just three yards. Spillane in coverage to tackle the catch. The punt gives the Steelers the ball at the 43 yard line.

– Two tackles against the run
– Saints chips/slide to him on 3rd down. Highsmith/Heyward ran a game and Highsmith came through late. Forced Dalton to hit checkdown and punt.

It sure is nice to have TJ Watt back in the mix.

On 1st and 10 from the Pittsburgh 48, Najee Harris picked up 5 yards up the middle. On 2nd, Najee rushed for 7 more yards to convert.

Pickett was sacked on 1st down for a loss of 4. 2nd and 14, Connor Heyward caught the short pass and was hit hard for a gain of 1 yard. On 3rd and 13, Pickett complete to Freiermuth for 11 yards, but just short. 4th and 2, Pickett passed to Jaylen Warren to convert for 7 yards.

On 1st and 10, Warren went left end off the quick toss for just two. An incompletion to Diontae Johnson, but pass interference moves the Steelers 11 yards. It was nearly intercepted, but caused by the interference.

Now in the red zone, the first down pass was incomplete after Pickett evaded pressure. Very nearly sacked, but a smart play by the rookie. They finally threw the slant, and it worked! Diontae Johnson for 11 yards. 1st and goal.

On 1st, Pickett incomplete to Pat Freiermuth – he had a chance, but couldn’t bring it in. 2nd and goal, Najee Harris rushed for 5 yards. 3rd and goal, George Pickens rushed for the touchdown. 7-0 Steelers.

23 rushing yards for Steelers. 20 of that by Najee #Steelers

This is the type of game where the Steelers can start to learn more about Kenny Pickett. He has played with a deep score deficit most of this time so far which changes the game flow, now there is a chance to allow a gameplan to develop.

The kickoff was returned well, but a holding brings them back to the 10 yard line.

1st and 10 from their own 10, Andy Dalton complete to Alvin Kamara for 2 yards. Damontae Kazee covering a lot of ground there to make the tackle. On 2nd, an 18 yard pass to Adam Trautman with Bush and Edmunds in coverage.

On 1st and 10, Kamara stuffed for a gain of just 1, stopped by Montravius Adams. 2nd and 9, incomplete pass from Taysom Hill. On 3rd and 9, Kamara picked up 7 through the air, but short of the line to gain. Stopped by Spillane and Maulet. The punt resulted in a touchback.

Steelers keeping starting defense out there on that Saints punt. Protect against fake especially with Hill serving as the upman. Danny Smith's done it a few times this year. #Steelers

Kenny Pickett was hit late on 3rd down. The Steelers stay alive on this drive from the penalty. 1st and 10 from the 37. Pickett complete to Diontae Johnson for 7 yards. On 2nd, Najee Harris ripped off a 36 yard rush bending it back into the cutback lane. Najee Harris banged up at the end of the run, but it was his best of the season.

On 1st and 10 from the red zone, Steven Sims was pushed out of bounds for a loss of 1 on the end around.

Second-longest run of Najee Harris' career. Only one longer was 37 yard TD last year to seal the win over the Browns in Ben Roethlisberger's final home game. #Steelers

Great first quarter for the Steelers. They're 2-0 when leading after the first 15 minutes this season. #Steelers

On 2nd and 11, Pickett incomplete deep to Diontae Johnson. He tried to go for the touchdown pass, but overthrew his man. Pickett complete to Pat Freiermuth for 6 yards, but it was well short. The Matthew Wright field goal is good. 10-0 Steelers.

Najee Harris was cleared to return to the game. Great news because he has been on fire.

Marcus Allen got the special teams tackle at the 28 yard line.

The 1st down pass was complete to Chris Olave for 12 yards. The next play, Kamara rushed for 3 with Reed and Heyward combining for the stop. On 2nd, Dalton under pressure and he misses Jarvis Landry. 3rd and 7, Arthur Maulet with the huge pass break up to kill the drive. Would have otherwise been a huge explosive play for the Saints.

Maulet never gives up on the play, continues to play through the catch point all the way to the ground. Finally wrestles it out.

GREAT play, probably his best play in coverage since being in Pittsburgh. #Steelers

The punt was fair caught at the 11 by Steven Sims.

Kenny Pickett scrambled for three on 1st down. Najee Harris was tackled for a loss of 2 on 2nd. 3rd and 9, Pickett to Pickens for  6, but it wasn’t enough. Pressley Harvin’s punt went 48 yards and was fair caught at New Orleans’ 34.

The first two plays were double digit gains for the Saints. 14 by Kamara on the ground and 11 through the air to Jarvis Landry.

Now in Pittsburgh territory, on 1st and 10 Kamara picked up three bending back to a small crease. On 2nd, Cameron Sutton broke up the pass to Chris Olave. Dalton was forced to throw it a hair early. 3rd and 7, Dalton converts with a 12 yard pass.

Watt made two tackles over the next three plays to force the field goal. 10-3 Steelers.

After the touchback, Najee Harris rushed 1 yard up the middle on 1st. On 2nd, Pickett incomplete to Diontae Johnson, but DPI called once again. If he wasn’t interfered with Diontae may still be running.

On 1st and 10, Pickett complete to Diontae Johnson in the short middle of the field. Johnson juked his way out of the first down. On 2nd and 1, Najee Harris stopped for no gain. 3rd and 1 with one more chance to correct Johnson’s mistake. Timeout called by the Saints which wiped out a 12 men on the field penalty. Derek Watt picked up 3 yards and converted.

Diontae Johnson did not gain a first down on this play. #Steelers pic.twitter.com/hgorub1mrr

Pickett tried a deep pass to Freiermuth, but it fell incomplete. On 2nd, Pickett short right to Sims who turned up-field for 15 yards.

1st and 10, Pickett kept the ball and rushed for 5 off left tackle. 2nd and 5, Jaylen Warren stuffed for no gain. 3rd and 5, Pickett crushed backside for the sack. Good thing he held on to the ball there.

Kenny Pickett just no feel in the pocket too. Bailed on clean pockets earlier, doesn’t sense pressure there on the sack. Really ugly day for the rookie.

Pressley Harvin’s punt went just 30 yards, but was fair caught at the 14. James Pierre called for interference on the fair catch. The Saints start with the ball at their own 29.

On 1st and 10, Dalton complete to Jarvis Landry for 17 yards.

Now near midfield, 1st and 10, sack by Alex Highsmith. A loss of 8 yards. Dalton complete to Olave for 14 yards to bring up 3rd and 4. A 10 yard completion keeps the drive alive, but with just 00:38 remaining.

1st and10, 8 yard gain through the air with the clock ticking. Damontae Kazee called for unnecessary roughness to move the Saints into easy field goal range.

Still with both timeouts, Dalton complete to Johnson for the touchdown. 10-10 Even.

And remember the Steelers consider Robert Spillane as their coverage LB in dime packages.

Steelers give up 10 unanswered going into halftime.

The kickoff was returned to the 27 yard line. On 1st down, Pickett scrambled up the middle for 12 yards. Timeout called at 00:05 remaining in the half. Pickett sacked to kill the half.

Steelers had such a strong start to the game. But when you're a bad offense, you'll never win big, never win easy. #Steelers