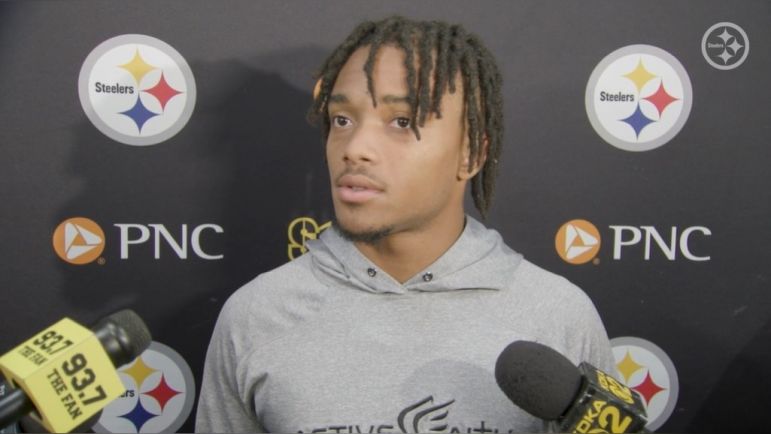 The Pittsburgh Steelers’ offense has a need for a lot of things. Points, mostly. They’re 30th in the league averaging barely more than 15 per game. But there’s also a need for speed. Rookie wide receiver Calvin Austin III can provide that. Still on injured reserve following a summer foot injury but back at practice for a second week, Austin is hoping to soon make his NFL debut. Speaking to reporters Wednesday, Austin discussed how he can make an impact.

“I think I can bring a speed element to create some 1v1s, create some mismatches,” he said via Steelers.com.

Austin came out as one of the NFL Draft’s fastest players, blazing a 4.32 40 at the Combine. Pittsburgh took him in the fourth round with the intent of rotating him in the slot, having him make plays downfield, and get involved in the receiver run game/quick game.

But he suffered a foot injury shortly ahead of the team’s preseason opener, shelving him for the rest of the summer. Pittsburgh placed him on IR prior to Week 1 and opened up his practice window last week. Austin told reporters he feels healthy and stayed engaged with his mental reps, considering himself ready to hit the field and see snaps.

“When I get the ball in my hands, I feel like I’m a person capable of making plays.”

Pittsburgh needs playmakers. Through five weeks, the Steelers have just 15 completions of 20+ yards, ranking in the bottom third of football while their longest completion is only 36 yards thanks to George Pickens’ amazing catch. Over the last two seasons, the Steelers rank 28th in completions of 20+ yards with 56 of them. Austin was a playmaker at Memphis, and while the NFL level is obviously different, Pittsburgh needs to turn to anyone who even looks capable of producing splash.

It’s unknown if the Steelers will activate Austin off IR and to their 53-man roster this weekend. They still have another week before the 21-day window closes, so it’s possible they take that extra time. Austin still has to prove his readiness from a mental and physical/conditioning standpoint, and missing months with a foot injury doesn’t make staying in football shape easy. But Pittsburgh must win two of its next three games to have even a puncher’s chance at getting back into the playoff hunt, and the sooner Austin can step on the field, the better.