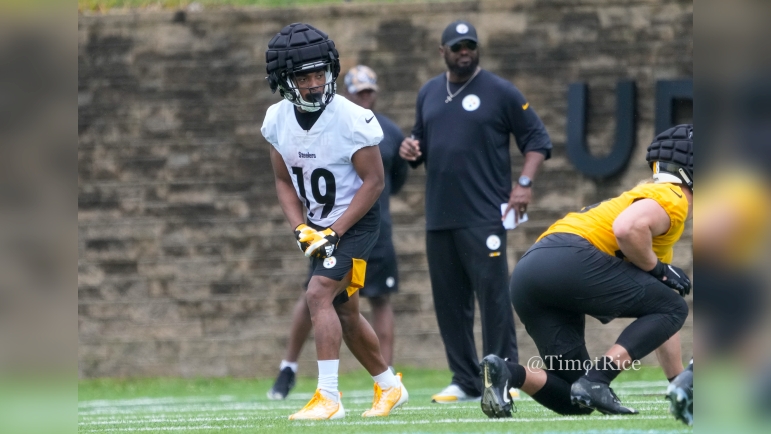 It looks like the Pittsburgh Steelers are close to getting some reinforcements on offense.

Rookie fourth-round draft pick Calvin Austin III, currently on injured reserve, will return to practice Wednesday at the UPMC Rooney Sports Complex on the South Side, opening his 21-day window to return from Injured Reserve, he stated to the Pittsburgh Tribune-Review’s Chris Adamski Wednesday, according to a tweet from the beat reporter.

Calvin Austin III confirmed he will practice for the Steelers today

The team confirmed that Austin will return to practice Wednesday.

WR Calvin Austin III will return to practice today but remains on the Reserve/Injured List.

We have 21 days to activate him to the 53-man roster. If he is not activated during that period, he cannot return to the active roster for the rest of the 2022 season.

Austin’s return to practice Wednesday will be the first action, that we know of, dating back to August 12 in training camp, when he originally injured his foot, eventually leading to him landing on IR with the designation to return after the Steelers announced the 53-man roster in September.

The specific injury Austin was dealing with was never revealed. For the rest of camp while he was hurt, according to Steelers Depot’s own Alex Kozora, Austin walked down the stairs and onto the practice field without a crutch or boot.

Tuesday marked the first official day the Steelers are allowed to open his 21-day window to return. On Tuesday, Steelers head coach Mike Tomlin did not say whether the team was going to open his window this week or not.

“He’s eligible to come off this week, that starts his 21 day window,” he said via Steelers.com. “The quality of his work and what he’s able to do within that window oftentimes determines what you do from there.”

Austin stated to reporters Wednesday though that his window is opening as he hits the practice field for the first time since mid-August. Once his window opens, the Steelers will have 21 days to either activate him off injured reserve and onto their 53-man roster or keep him on IR for the remainder of the season.

Though he is returning to practice, it’s a stretch to suggest he could be activated from IR and onto the 53-man roster ahead of Sunday’s game against the Buffalo Bills, considering the amount of time he’s missed due to the injury.