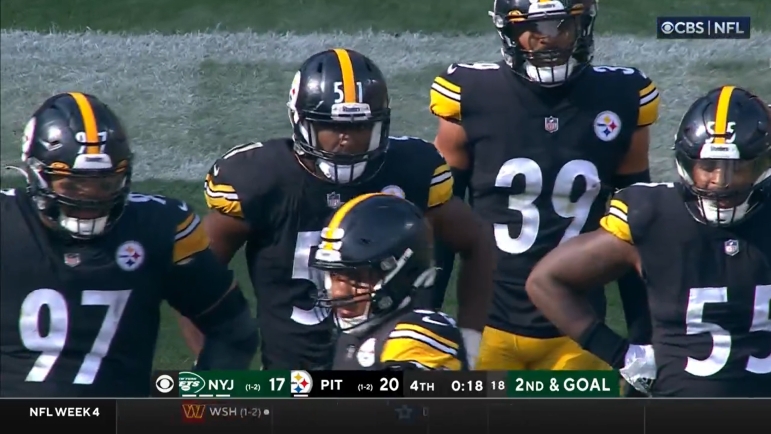 The Pittsburgh Steelers led 20-10 against the New York Jets with under eight minutes to go in today’s 24-20 loss at Acrisure Stadium. After a touchdown drive by the Jets, they got the ball back after a Kenny Pickett interception and strung together another touchdown drive, scoring with 16 seconds left to go up 24-20. Pittsburgh’s defense got gashed by the Jets on key downs, allowing a 22-yard completion on 4th and 7 and numerous third down conversions. Defensive lineman Cameron Heyward said the Steelers’ defense needs to take accountability for the fourth-quarter collapse.

“We have to be accountable for it. You gotta look at the film, I’m not gonna sit up here and just say it’s one guy, or this guy, but I think all of us have to be better. Whether it’s using your hands and getting off blocks. It’s easy to say that defenses love man front, but we are all accountable, whether it’s run or pass making sure we do our jobs,” Heyward said in his postgame press conference via the team’s YouTube channel.

One of Pittsburgh’s biggest issues has been the lack of a pass rush. While they got pressure on Zach Wilson today, they were only able to bring him down for one sack. On those key third downs and the fourth down, if Pittsburgh was able to get home and get to Wilson, we’d be talking about a different outcome. Instead, Wilson had plenty of time to find an open receiver and extend the drive and ultimately lead the Jets to victory.

For the most part, Pittsburgh did a solid job against the Jets’ ground game, which made the lack of pressure really stand out. Breece Hall finished with 17 carries for 65 yards, while Michael Carter had just 15 yards on nine carries. The run defense was an issue against Cleveland last week, but the issues in that facet of the game seemed to be cleaned up today.

Ultimately though, the unit wasn’t good enough. The offense has it’s fair share of problems, but they gave the defense a two-score lead to work with, and the defense allowed the Jets to finish off their final two drives with touchdowns. It’s not easy with T.J. Watt and Terrell Edmunds out and Heyward and Minkah Fitzpatrick banged up, but that’s a game the defense has to close out, and they weren’t able to do so. Now, the Steelers sit at 1-3 with an uphill climb to .500, as the Bill, Buccaneers, and Dolphins await the next three weeks.