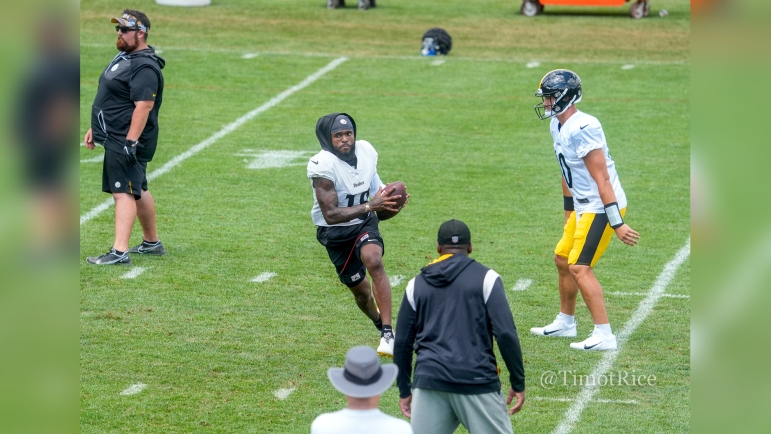 According to a report from the Pittsburgh Post-Gazette’s Gerry Dulac on Monday night, veteran quarterback and team captain Mitch Trubisky was benched at halftime of the game against the New York Jets due to an altercation with top receiver Diontae Johnson after yet another frustrating half of play.

Per Dulac’s report, after a ball bounced off of Johnson’s finger tips for an interception in the first half of the Week 4 loss to the Jets, and then Johnson’s inability to get his foot down inbounds on Trubisky’s best throw of the day for what should have been a touchdown, the two reportedly got into a heated altercation in the locker room, leading to the switch.

Wednesday, from his locker inside the UPMC Rooney Sports Complex on the South Side, Johnson spoke with reporters and addressed Dulac’s report, stating that there’s “no bad blood between us” and called the matter squashed, according to a tweet from ESPN’s Brooke Pyror.

“I don’t want to get too much into detail with that. We’re both passionate about the game. Stuff happens during football. We’re fine. We talked about it, and made up over the situation,” Johnson stated to reporters, according to Pryor’s tweet. “No hard feelings towards each other. That’s still my guy at the end of the day. I’m gonna keep playing for him, cheering for him. Whatever it is that he needs me to do to help him look good out there, I’m going to do it.

“Like I said, there’s no bad blood between us at all. It’s just us being football players at times. We’re not going to let that stop us from achieving the goal that everyone is trying to achieve around here.”

Diontae Johnson seemingly confirms that an argument between him and Mitch Trubisky did take place at halftime of the Jets game, but he declined to get into specifics/ if it contributed to Trubisky's benching.

"We're both passionate about the game. Stuff happens during football." pic.twitter.com/a6EimLPvk5

Johnson speaking about the altercation confirms that it did indeed happen, which many suspected, but it still remains rather unlikely that head coach Mike Tomlin made the change under center at halftime because of the dustup between quarterback and receiver. If that were the case, why not sit both down?

As Johnson points out, he and Trubisky are both passionate about the game, and frustrations were certainly reaching a boiling point as the offense was once again stuck in the mud and struggling to do much of anything correct against the Jets. Heated arguments in the locker room are much more frequent and normal than many would believe.

Of course, if Johnson gets that left foot inside the field of play in the back of the end zone against the Jets, the altercation doesn’t happen, Trubisky ultimately doesn’t get benched and things remain status quo moving forward, at least for the time being.

This mostly feels like a non-story, especially two week after the incident occurred. Yet here we are seeing players asked about it and then, in turn, having to write about it. It was handled in-house, and according to Johnson, all is good now as the two have turned the incident into water under the bridge.

Now that we’ve heard from one of the parties involved, maybe the attention can shift back to, you know, actual football.