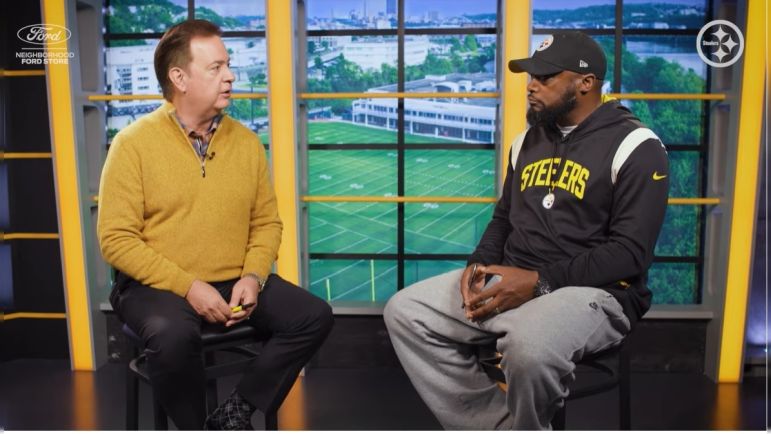 The gameplan to beating the undefeated Philadelphia Eagles this weekend might not be easy. But it’s pretty simple. Take care of the football. Mask splash plays. Upsetting the heavily-favored Eagles requires a similar script as the Pittsburgh Steelers executed to knock off the Tampa Bay Buccaneers, and that’s a point Mike Tomlin made during this week’s The Mike Tomlin Show earlier today.

No team has taken better care of the football this season than the Eagles. They’ve turned the ball over just twice in six games, a pair of Jalen Hurts interceptions, easily the best mark in football. Every other offense has at least five giveaways. Despite being a potent group, Philadelphia has walked the line between putting up points without being reckless or overly aggressive. Offensively, they run a sound, fast-paced scheme with playmakers at the skill groups. Miles Sanders at RB, Dallas Goedert at TE, A.J. Brown and Devonta Smith at WR. They also have arguably the best offensive line in football, a big and athletic front five.

With a defense that’s able to take the football away, the Eagles sit +12 in turnover differential this season, first in the league and doubling second place. By contrast, Pittsburgh sits bottom-third in turnover differential at -2. As Tomlin noted, to beat the Bucs, the Steelers didn’t turn the football over and relied on splash plays in the special teams game, highlighted by Steven Sims’ 89-yard kick return to open the second half to eek out a victory. There’s a clear path to Pittsburgh victory this season. They’re 2-0 on the year when they don’t turn the ball over, and 0-5 when they do.

As we’ve liked to note throughout the year, the Steelers’ record in one-possession games isn’t as impressive as it was the past two seasons. Across 2020 and 2021, Pittsburgh was a league-best 15-4-1 in one-score games. In 2022, they’re 2-3. It’s possible the Steelers beat the Eagles, but it’d be a close game, and just like Tampa, Pittsburgh would have to find a way to finish that one out. But keeping it close means taking care of the football, or else the fourth quarter won’t mean much.