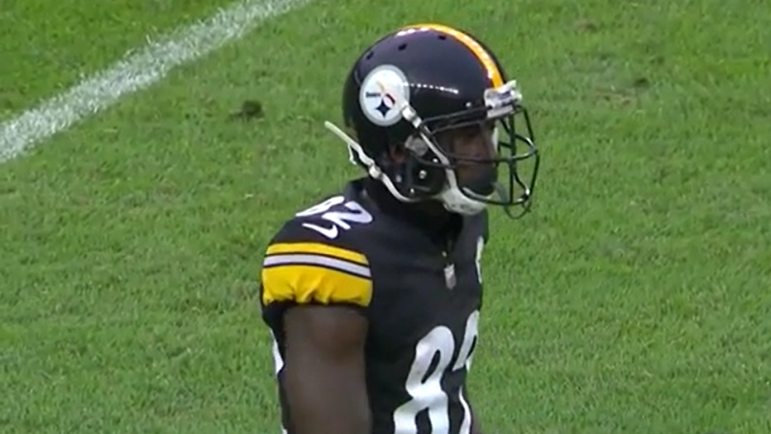 WR Steven Sims has had a roller coaster ride of highs and lows over the last couple of weeks.

After taking over as the team’s starting KR/PR Week 5 against the Buffalo Bills in place of Gunner Olszewski, Sims nearly missed his opportunity after sustaining one of the weirder injuries, that he described recently to former Steelers OLB Arthur Moats on his podcast.

“Man, Kenny’s arm is just so strong,” Sims said on The Arthur Moats Experience With Deke, which aired on Arthur Moats’ YouTube Channel. “Kenny threw a ball, man. It came right through my hands, and it hit me dead in the eye. My eye was wide open. It was serious. I’m thankful that I still have my sight and everything to recover the best I can. Yeah, it was direct impact on my eye, my eye was wide-open, and it was the point of the ball.”

I have an extra eye that Steven Sims can use #Steelers

Sims would go back to the locker room and miss the beginning of the game, ceding return duties to CB James Pierre, who fumbled the kickoff. Luckily, Pittsburgh blocked Buffalo’s field goal attempt after Buffalo recovered the fumble. Sims would get his eye treated and eventually made it back into the game, returning one kickoff for 19 yards and fielding no punts in the contest.

Sims seemed to possibly blow his chance at Pittsburgh’s starting KR/PR job before he could field a return, committing the cardinal sin of wide receivers by letting an on-target throw by Kenny Pickett go straight through his fingertips right into his noggin and drill him right in the eye socket. However, HC Mike Tomlin remained faithful to Sims, stating that he would be Pittsburgh’s lead return man in their next matchup against the Tampa Bay Buccaneers should he be healthy. Sims made good on his second chance, ripping off an impressive 89-yard kick return against the Bucs along with a 24-yard punt return, putting Pittsburgh in great field position thanks to his efforts.

.@StevenSimsJr with some space to open the 2nd half! #HereWeGo

Thankfully, no permanent damage was done to Sims’ eyeball, and he was able to return to the game, albeit having to play with his bad eye closed for stretches of the game due to the heavy wind in Buffalo. Now battling a hamstring injury and having been ruled out for Sunday night’s game against the Miami Dolphins, Sims will try to get healthy in short order to get back on the field and recapture the starting KR/PR job by next week against the Eagles, with Pittsburgh’s game against the New Orleans Saints after the bye being a more realistic return date.