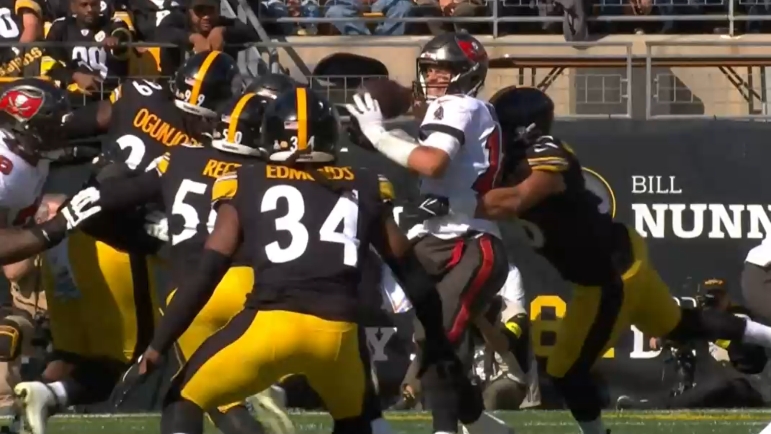 Winners and losers from the Pittsburgh Steelers 20-18 win versus the Tampa Bay Buccaneers Sunday afternoon.

Larry Ogunjobi – Aside from missing most of the Bills’ game with a back injury, Ogunjobi has come on strong and settle in his last several weeks as a Steeler. He was a force today, consistently in the backfield and getting pressure on Tom Brady. His hump move is an uncommon one but effective and he shots gaps and got upfield well.

Cam Heyward – Heyward played like his usual, dominant self today. Not that he was bad the last month but the pass rush production had tanked. Facing a rookie left guard, Heyward’s bull rush was winning 1v1 matchups and he routinely collapsed the pocket. That’s critical against Tom Brady.

He finished the day with two QB hits after having zero from Weeks 2-5.

James Pierre – Pittsburgh’s secondary had to step up today to win this one. And largely, they held firm. Pierre was the most impressive. Struggling to find his role since entering the league, he was competitive and combative at the catch point, breaking on the ball and making plays on possession downs.

Red Zone Defense – Bend but don’t break. That was the Steelers’ motto today. Tampa Bay started 0-3 in the red zone with Pittsburgh winning on possession downs. The Bucs finished the day 1-4. It’s one of the biggest keys and stories of today’s game. Huge defensive stands and immense credit to a defense that came into this one injured and counted out (myself included in that).

Myles Jack/Terrell Edmunds – Two players on defense who had solid games. Jack had a crucial tipped pass that negated a would-be Cameron Brate TD and had a key third down tackle in the second half. Edmunds’ return was needed with so many defensive starters out. He wasn’t splashy, never is, but his run defense and ability to fill and tackle were solid against a run-heavy Bucs’ team.

Steven Sims – Sims brought desperately need big-play ability today with an 89 yard return, making a couple players miss with a 24-yard punt return later in the third quarter. Splash plays this team needed with an offense that still struggles so much. Didn’t like him running backwards the one return but Sims still played well. He should have his return spot locked in.

Wide Receivers On Third Down – After struggling on possession downs in last Sunday’s blowout loss, guys stepped up today. Wasn’t perfect, Pittsburgh still needs to be better on third down overall but Chase Claypool, Diontae Johnson, and George Pickens all made plays to move the sticks. Claypool especially came up big in the second half with three long conversions on 3rd and 15 and 3rd and 16 and 3rd and 11. Claypool was incredibly clutch today and a big winner. Encouraging to see.

Mitch Trubisky – Gotta give him plenty of credit. Subbing in for the concussed Kenny Pickett, Trubisky stepped up. He commanded the offense, pushed the ball downfield, and made big plays on third and long. It’s the reason why Mike Tomlin didn’t try to bury him after benching him. He was still one snap away from big needed and came up large Sunday.

Kevin Dotson – Rough one for Dotson who was a mistake machine today. Two first half penalties, a false start on 3rd and 6 in the red zone, and later flagged for holding. He also may have been late on the field for Chris Boswell’s 55-yard field goal, forcing the Steelers to waste a timeout. Dotson was then flagged for holding that negated Kenny Pickett’s long completion to WR Diontae Johnson, one that resulted in Pickett being injured. Dotson was beat around the edge the very next snap. Arguably the worst game of his career.

Non-scripted offense – Similar story to last week. Props to a good opening script, Pittsburgh finally finding the end zone on an opening possession since Week 10 last year. But from there, it was a dud. An offense that average fewer than two yards per play the rest of the half. Settling for a field goal after Steven Sims’ 89-yard return. Just a ton of missed chances.

Tempo was a positive development, using it in key moments like Connor Heyward’s 45-yard gain, but this offense continues to struggle overall.

Special Teams Sloppiness – Two offsides on field goal attempts. Two miserable kick returns until Pittsburgh got it right on Sims’ long run-back, the Steelers trying to build an outside wall for Sims to run through. The aforementioned timeout needed to get correct personnel on Boswell’s long field goal. Pittsburgh two long returns and I’m certainly not ignoring that but there’s a lot to be cleaned up. Plenty of annoying things that are hurting this team. Players have to do their jobs but blame falls on Danny Smith, too.

Robert Spillane – Still trying to figure out what Robert Spillane’s role is. Still don’t have an answer. He’s not a good dime linebacker, isn’t making that many plays against the run, and got juked by power back Leonard Fournette on his TD late in the fourth quarter. He played a lot in three-linebacker packages but he’s Anthony Chickillo. Quality special teamer, camp star, doesn’t translate.