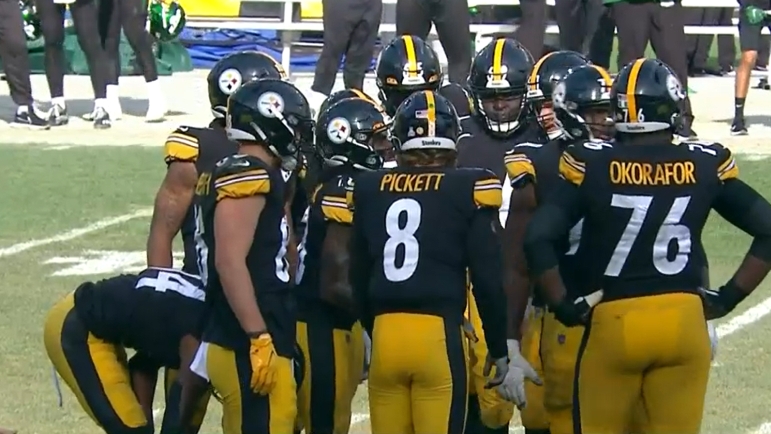 A three-game slide has coincided with a slide down the NFL Power Rankings for the Pittsburgh Steelers, according to NFL.com’s Dan Hanzus and his Week 5 Power Rankings.

A tough 24-20 loss to the New York Jets Sunday at Acrisure Stadium caused the Steelers to fall to No. 27 overall, seeing the New York Jets pass them in the process. While the loss was rather frustrating as the black and gold blew a 10-point fourth quarter lead, there was a least one major positive that came out of the game Sunday: the Kenny Pickett Era has officially begun.

Steelers head coach Mike Tomlin made the decision to switch from veteran Mitch Trubisky to rookie Kenny Pickett at the half, providing the Steelers’ moribund offense with a real jolt of life as the black and gold scored two second-half touchdowns via the legs of Pickett on a quarterback sneak and a quarterback keeper in goal-to-go situations.

Still, the switch wasn’t enough in the end as a costly interception and the defense’s inability to get stops down the stretch in favorable situations on weighty downs led to the frustrating loss, causing the Steelers to fall a spot in the power rankings.

“Mike Tomlin said he wasn’t going to do it. He said Mitchell Trubisky was his guy at quarterback. Then Sunday’s game reached halftime and Tomlin decided he’d had his fill. Enter first-round pick Kenny Pickett, who scored two rushing touchdowns and threw 13 passes that never touched the ground,” Hanzus writes regarding the Steelers ranking at No. 27 overall. “Unfortunately, three of those connections were to Jets defenders in a 24-20 loss at Acrisure Field. After the game, Tomlin chose not to commit to a Week 5 starter, but he’s in too deep now. Pickett has gone from future to present and Trubisky has rightfully returned to a reserve role. Tomlin likely resisted this direction initially because he didn’t want to deal with rookie growing pains. In the end, Trubisky’s neck-straining ceiling left the coach no choice.”

Though it’s a bit earlier than at least initially expected, the move to Pickett was one that was ultimately coming at some point in the 2022 season. He is the intended future franchise quarterback, but now he’s the present due to the Steelers staring down a near-must-win situation already in Week 4, considering the month-long stretch that awaits them with the Buffalo Bills, Tampa Bay Buccaneers, Miami Dolphins and Philadelphia Eagles before the bye week.

Growing pains are going to happen, and rookie mistakes are to be expected, but it’s good to get Pickett into the mix now and let him learn on the job, rather than hoping the offense continues to improve and Trubisky finds his game.

The Steelers are undoubtedly in a year of transition. It’s good to allow Pickett to be part of that transition on the field, learning and growing weekly with teammates around him that are viewed as the nucleus of the offense moving forward. It’s hard to feel good about the Steelers right now, sitting at 1-3 and losing the way they have the last three weeks, but at least the transition to Pickett provides some sense of excitement.