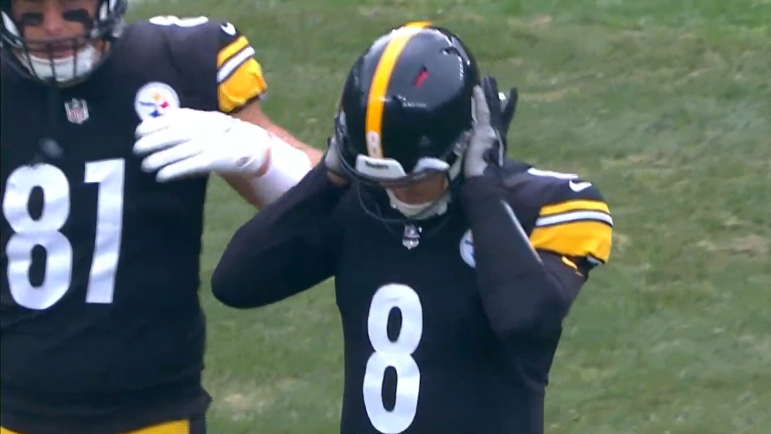 The 1-2 Pittsburgh Steelers returned to Acrisure Stadium to take on the 1-2 New York Jets in a pivotal Week 4 matchup. In what ended up being Kenny Pickett’s debut, the Steelers blew a 20-10 fourth quarter lead and lost 24-20 to fall to 1-3 on the season.

The Steelers started with the ball and after a five-yard run by RB Najee Harris, they picked up a first down on a completion to TE Pat Freiermuth. Freiermuth had another completion on 3rd and 5 to give the Steelers their second first down of the drive, but that would be all they would get as the drive stalled out. P Pressley Harvin III booted a 36-yard punt to the Jets 9, which is where they would take over for their opening drive of the game.

Jets QB Zach Wilson was making his season debut, but he didn’t show much on the opening drive. His third-down completion to WR Garrett Wilson was short of the sticks and a nice tackle by CB Arthur Maulet forced a three-and-out. P Braden Mann boomed a punt 59 yards, and the Steelers’ second drive would begin from their own 23.

The first play of the Steelers’ drive was a disaster, as WR Diontae Johnson couldn’t reel in a pass and the ball went off his hands into the hands of S Lamarcus Joyner for an interception. Alex Highsmith sacked Zach Wilson on the first play of the Jets drive. On 3rd and 5 two plays later, RB Breece Hall got enough for a first down. On 3rd and 11, the Steelers’ defense got a stop, but the Jets got on the board on a 38-yard field goal by K Greg Zuerlein. The turnover proved costly as New York went up 3-0 with 4:03 left in the first quarter.

Pittsburgh responded with a three-and-out. It was their league-leading 12th of the season. Harvin’s punt went 36 yards to the Jets 30, and was fair caught by WR Braxton Berrios.

On 3rd and 6, Wilson found WR Elijah Moore for a 20-yard gain and a first down. Two plays later on the first play of the second quarter, Moore gained another 28 yards and the Jets were threatening inside the red zone. A nine-yard run by Hall gave the Jets a 1st and Goal, and Braxton Berrios threw a touchdown pass to Wilson on a double-reverse pass. The Jets took a 10-0 lead with 12:37 left after Zuerlein’s extra point.

After a pooch kick and return by Benny Snell, the Steelers began their drive on their own 25. A holding penalty against Kevin Dotson on second down put the Steelers in a 2nd and 16, but Trubisky hit George Pickens over the middle of the field for 26 yards and a first down. Two plays later, RB Jaylen Warren ran for 14 yards and on the next play RB Najee Harris broke off a 13-yard run down to the Jets 25. Two plays later, QB Mitch Trubisky threw deep to Johnson in the end zone, but Johnson was ruled to have had one foot out of bounds and it was upheld after Pittsburgh challenged. On 3rd and 8, Trubisky was sacked by DL Quinnen Williams, and the Steelers lost 10 yards. K Chris Boswell came out and put the Steelers on the board with a 51-yard field goal, but they still trailed the Jets 10-3 with 8:30 left.

After the field goal, Boswell’s kickoff went out of bounds and the Steelers were flagged. The Jets would open the drive with great field position at their own 40. The Pittsburgh defense held up though, forcing a three-and-out. Mann’s punt was fair caught by WR Gunner Olszewski at the Pittsburgh 15.
On first down, Trubisky and Freiermuth connected for 24 yards over the middle of the field for a first down. On 2nd and 9, Trubisky took a sack and the Steelers were forced into a 3rd and 18 and Trubisky was incomplete to Claypool. Harvin punted again, and a holding penalty against the Jets would start them at their own 9. They picked up one first down but would end up punting, and the Steelers once again went three-and-out upon getting the ball back. Harvin would unleash his worst punt of the day, a 36-yard shank that set the Jets up at their own 46 just before the two-minute warning.

A third down defensive holding penalty against Arthur Maulet gave the Jets a new set of downs, and on 2nd and 10, Breece Hall ran for 16 yards and a first down. Later in the drive on 3rd and 11 from inside the Steelers 30, Wilson was intercepted by CB Cam Sutton and the defense came through to keep the Jets off the board.

With 20 seconds left, the Steelers had a chance to get points. A first down completion to Freiermuth over the middle meant Pittsburgh had to burn their last timeout. With nine seconds left in the half, Trubisky threw a hail mary to the end zone and took a shot from DE Carl Lawson. Lawson was flagged for roughing the passer, and the penalty gave the Steelers 15 yards and a chance at at a field goal. Boswell came out for a 59-yard try, and hit it, giving him the longest field goal in Acrisure Stadium history. At the half, the Steelers still trailed the Jets 10-6, but getting points on the board before half was a positive.

The Jets went three-and-out to open the second half, and the Acrisure Stadium crowd got what they’ve been chanting for since the preseason, as rookie quarterback Kenny Pickett replaced Mitch Trubisky to start the second half. It wouldn’t come without some drama though, as Olszewski fumbled the punt but the Steelers were able to recover. They ran the ball three straight times to open the drive, and on 4th and 1, Pickett converted a QB sneak for a first down. An unnecessary roughness penalty against LB CJ Mosley gave the Steelers an additional 15 yards and put them in Jets territory. On the next play, Pickett’s first throw was deep down the field to Chase Claypool, but he couldn’t grab it and it was intercepted off his hands by S Jordan Whitehead.

The Jets got a first down on the first play of the drive, but on 3rd and 6 later in the drive, Wilson’s pass was intercepted by Minkah Fitzpatrick and he took it back to the Jets 4-yard line. The Steelers ran a shovel pass on the first play of the drive that went for two yards, and then Harris ran for a yard. On 3rd and Goal, Pickett scored his first NFL touchdown on a QB sneak. The Steelers went up 13-10 with 7:18 left after Boswell’s extra point.

Pittsburgh had a chance to get off the field on 3rd and 5 on the Jets’ next drive, but Wilson threw a dart to TE Tyler Conklin over the middle for an 18-yard gain. That would be the only first down of the drive for New York, as Mann punted a few plays later. Pickett’s third drive would begin at the Pittsburgh 18.

A completion on first down to Freiermuth gave Pittsburgh another first down, and then Harris ran for 16 yards and a first. On 3rd and 6, Pickett scrambled for seven yards and a first down to extend the drive. Back-to-back completions by Pickett to George Pickens gave the Steelers a first down at the Jets 22. On 3rd and 8, Pickett stood in against the blitz, took a shot but threw a nice pass over the middle to Freiermuth for a first down. The next play, he ran in his second score of the day, and Pittsburgh went up 20-10 after Boswell’s extra point with 13:36 to play.

Second TD for Kenny Pickett on the ground #Steelers pic.twitter.com/G5NaDBAIqf

The Jets gained 35 yards on 3rd and 6 on a completion to Garrett Wilson that put them in Steelers territory. On 2nd and 10, Hall was met in the backfield by Wormley and Pittsburgh forced the Jets into a 3rd and 14. Wilson scrambled and was hort of the sticks on 3rd down, and the Jets had to go for it on 4th and 7 with under 10 minutes left. They picked up the first on a 22-yard gain by Corey Davis, and then Hall broke free for 16 yards and was pushed out at the Pittsburgh 1. Two penalties by the Jets knocked them back to the 10-yard line, where they would have 1st and Goal. On 3rd and Goal, Wilson again went to Davis, and he scored. The extra point by Zuerlein cut the Steelers lead to 20-17 with 7:31 left in the game.

Back-to-back completions to Johnson led to a first down, and three plays later Pickett went downfield and completed a pass to Pickens for 26 yards. The next play was a botched toss that was fumbled, and then Pickett tried to hit Freiermuth but was tipped and picked off by CB Michael Carter II. With 3:34 left, the Jets had a chance to tie or take the lead trailing 20-17 with the ball on their own 35.

The Jets first play was a 15-yard reception by Davis, and the Jets got another first down on a completion to TE Tyler Conklin on 3rd and 6. Another completion to Davis, this one for 17 yards, moved the Jets into the red zone. On 1st and Goal, Breece Hall got the Jets down to the 2-yard line. On 2nd and Goal, it was initially ruled that Hall fumbled reaching for the goal line and it was recovered by the Jets. Upon review, it was ruled a touchdown, and with 16 seconds left, the Jets took a 24-20 lead after Zuerlein’s extra point. The Jets comeback was complete, as Pittsburgh blew a 20-10 fourth quarter lead.

The road doesn’t get any easier for Pittsburgh, as they’ll head to Buffalo next week to take on the 3-1 Buffalo Bills.