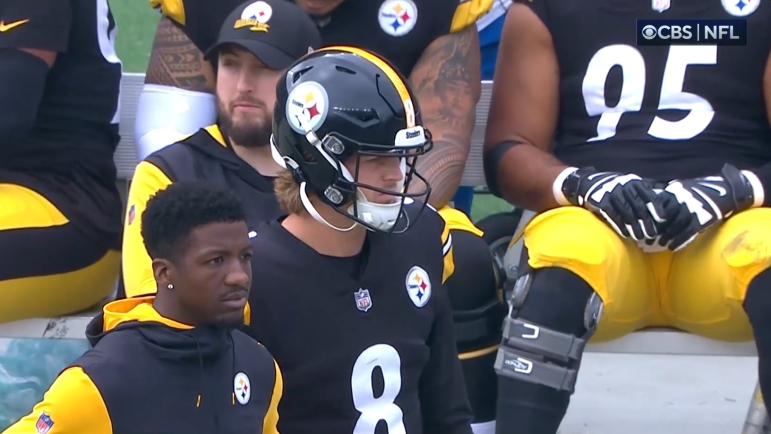 The Kenny Pickett era is underway. He is replacing veteran Mitch Trubisky to begin the second half of the Pittsburgh Steelers’ Week 4 game against the New York Jets.

Pittsburgh has just six first-half points, a pair of Chris Boswell field goals. Trubisky went 7/13 for 84 yards and an interception in the first half, trailing the Jets 10-6 at the break.

Pickett was the team’s first-round selection, 20th overall, in 2022.

Mike Tomlin has stood by Trubisky throughout this year, noting his improvement, but he may is finally making a change. For the first half, at least.

Pickett shined in the preseason and worked his way up to be the team’s #2 QB behind Trubisky but ahead of Mason Rudolph. Now, he’ll get a chance to show what he can do in regular season action. These will be his first snaps of his career.

The Acrisure Stadium crowd sure approved of the move, wildly cheering Pickett as he walked onto the field.

Pickett’s first meaningful snap was a QB sneak on 4th and 1 to move the chains.

Pickett’ first NFL pass is an interception, a pass that hit off Chase Claypool’s hands on a contested downfield throw and picked by safety Jordan Whitehead.

Pickett scored his first TD on a QB sneak later in the third quarter.