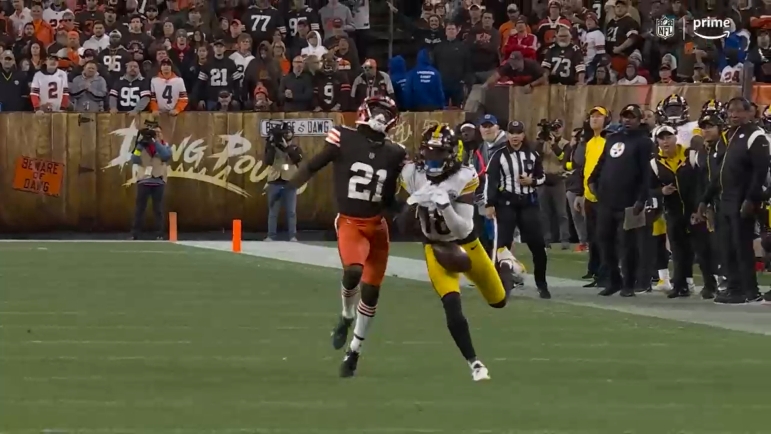 While the Pittsburgh Steelers have been criticized for a lack of a vertical offense, Mike Tomlin believes it isn’t for a lack of trying. Joining Bob Pompeani for this week’s edition of The Mike Tomlin Show, Tomlin explained how the offense is constructed.

Like most offenses, the Steelers typically have routes that attack every level and area of the field. Something vertical, something intermediate, and something short, the latter usually a checkdown to a running back. And it’s up to the quarterback to read the defense, recognize the coverage, and make the appropriate throw. It is worth pointing out the Steelers’ offense seems generally conservatives, often with low-to-high reads. Their boot game is a perfect example of that. On rollouts, the Steelers always read flat first and if it’s open, the quarterback is to deliver the ball, even if something could be open downfield. Only when the flat is taken away does the quarterback deepen his progression.

In Week 3’s loss to the Cleveland Browns, the Steelers’ offense took more shots. But aside from George Pickens’ incredible catch, the team found little success throwing deep. On the year, Trubisky’s numbers paint him as a relatively aggressive quarterback but like 2020 and 2021, the team’s success throwing long has been poor. As Dave Bryan has talked about, Trubisky’s inefficient deep ball numbers are in-line with what he’s done throughout his NFL career.

Still, Tomlin said a varied offense is generally a good offense. Or at least a better one.

“You don’t wanna play in a closet and consistently attacking the field vertically and throwing the ball down the field is component of that.”

For Pittsburgh’s offense especially, they need to improve their vertical passing game. It isn’t a unit built to sustain crisp, 11-play drives, especially when they’re converting only 1/3 of their third downs. They need chunk plays to minimize that problem. Right now, they’re not getting it. Only one wide receiver has a catch longer than 30 yards, again, that was Pickens’ amazing grab, while the team doesn’t have any play longer than that this season. That’s not winning football and for the Steelers, their attack needs to change starting tomorrow afternoon.