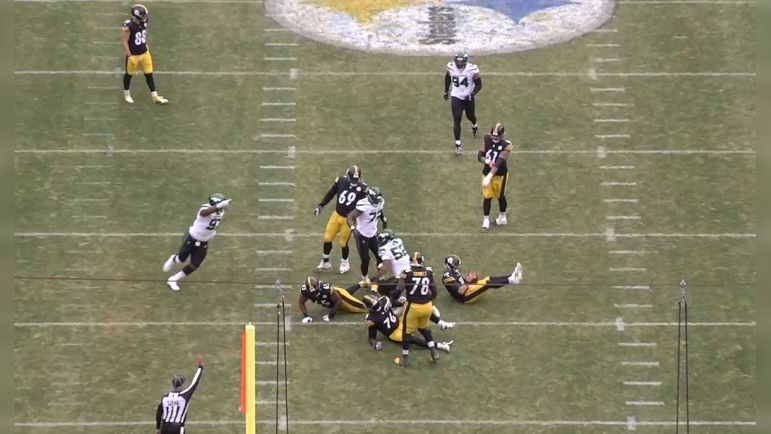 Breaking down the three sacks allowed by the Pittsburgh Steelers in Week 4’s loss to the New York Jets.

Pre-snap, the Jets align with an overloaded front, three of the four down linemen to the right of center. That’s usually a strong tell there’s some sort of “game” being run and here, the 1T loops from the A gap to the weakside C gap.

While you can call this some sort of “stunt” between the DT and DE, it can’t be passed off like a normal one. There’s no way Dan Moore Jr. and Kevin Dotson pass things off like on a regular T/E type of stunt, the crasher too quick to shoot the gap before the looper comes. So Kevin Dotson has to take the looper while Moore deals with the crasher.

But Dotson lacks the foot speed on the edge and to be fair, that’s a tough spot for him to be in. Mitch Trubisky slides to his left and makes things tougher on Dotson, no longer able to seal the edge, and #95 Quinnen Williams cleans things up with a sack.

Downfield, out of a stacked look, Chase Claypool and Diontae Johnson are bunched up in their release, which isn’t helping matters. There are underneath options emerging but Trubisky is locked on that stacked side and gets sacked before progressing to his next read. 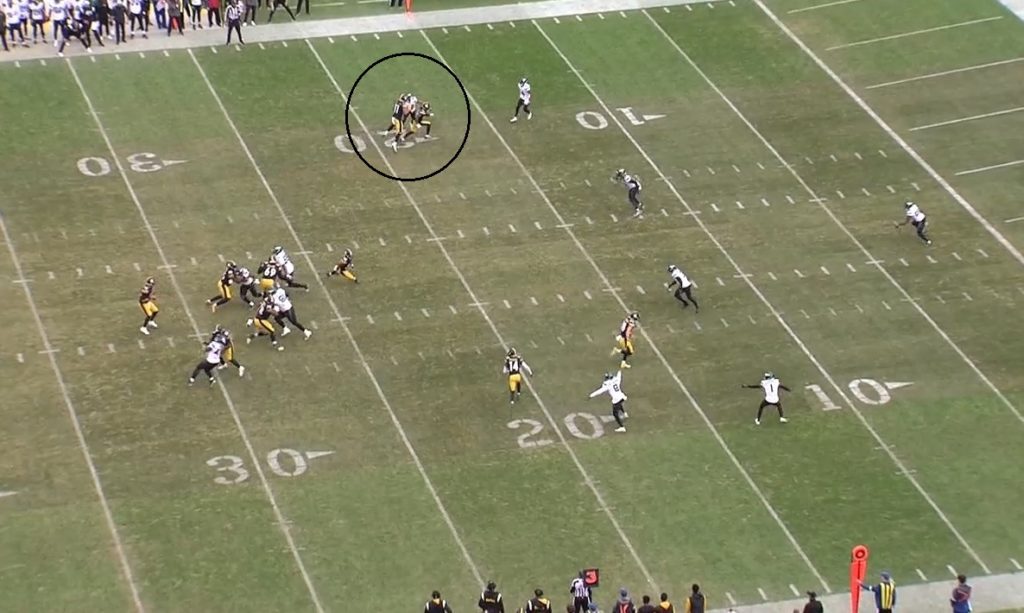 Blame here is a little tough to discern and you could argue it falls on a couple different levels: o-line, quarterback, and receivers. Also gotta credit the Jets for a good scheme. I’m going to put half on Dotson for not having the feet speed to seal the edge and half on Trubisky for sliding to his left more than he needed to do. But this one is up for plenty of debate. This also makes for the first time I’ve charged an offensive lineman with a sack this season.

Blame: Half on Kevin Dotson, half on Mitch Trubisky

Certainly frustrating to be sacked against a three-man rush. The Jets had success dropping eight against the Steelers’ empty sets, successfully doing the same on Mitch Trubisky’s INTs that was tipped by the Jets’ DT dropping into coverage. But a three-man rush can still mean 1v1 coverage.

Chukwuma Okorafor has a bit of trouble sealing the edge against the LDE on this play, his feet stopping on contact and his hips turning too much. Still, there’s a reasonable pocket for Trubisky and after pulling his arm down, he tries to spin and bail. No reason to run against a three-man rush with a clean pocket. He spins into the sack and gets taken down.

As you’ll see in the GIF, Pat Freiermuth certainly looks open. It’s perhaps a little less so in the photo I’ll show above but it’s a catch Freiermuth can make. I’m not sure why Trubisky didn’t hit it. I think he wanted to wait and hit George Pickens over the middle and then pulled his arm down once he saw the defender get depth. He should’ve moved onto his next read instead of trying to scramble. 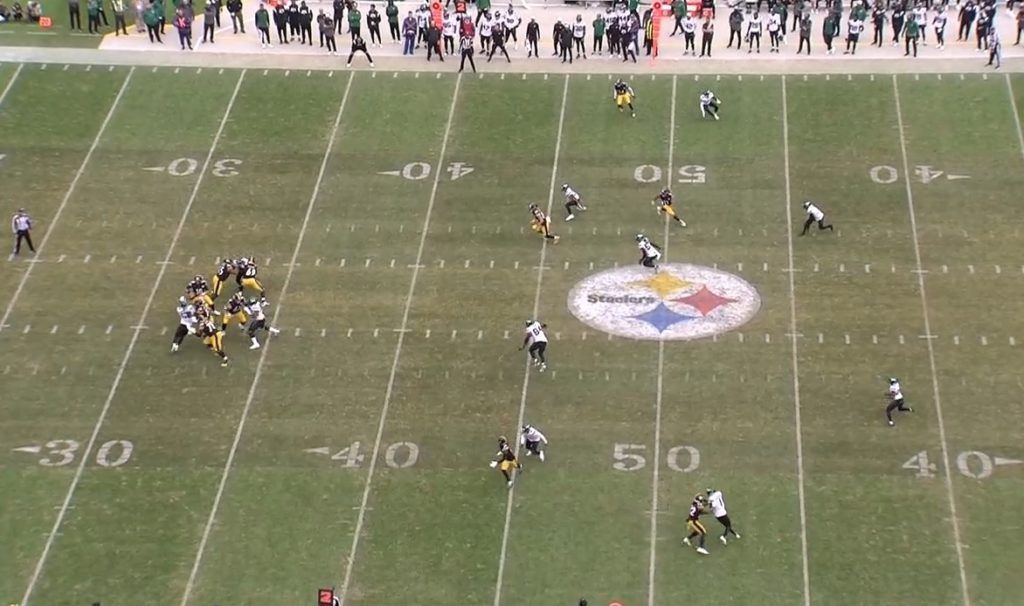 I’m putting this one on Trubisky. Okorafor could’ve been better but he did enough that Trubisky wouldn’t have gone down if he didn’t spin and bail.

This one is more on the line. Moore left side. Good first punch with independent hands but his feet stop a bit on contact, allowing the RDE to win the edge. Moore isn’t able to recover and seal. Trubisky is taken down. 3rd and long, Steelers running four verts/benders and you could argue Trubisky needed to step up here. But Moore is beat. You can see Okorafor seal the edge much better.