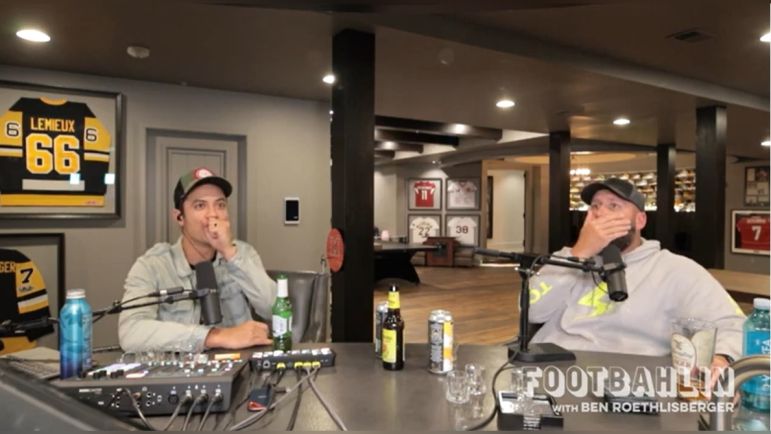 Ben Roethlisberger switched up the model of his new(ish) podcast Footbahlin. In today’s episode, he released a stream of him and his cohost Spence watching Sunday night’s game between the Pittsburgh Steelers and Miami Dolphins. A whopping three-hour video, Roethlisberger stuck around to watch how the game wrapped up, QB Kenny Pickett throwing a third and final interception that ended the team’s comeback bid. Like the rest of Steelers’ Nation, Roethlisberger reacted with an audible “no” watching Pickett’s final pass fall right into CB Noah Igbinoghene’s hands.

After reacting, Roethlisberger wondered aloud as to what happened on the play.

Roethlisberger’s real-time belief essentially proved to be accurate. Speaking to reporters after the game, Pickett said there was miscommunication between him and WR Diontae Johnson, saying Johnson broke his route off a different way than Pickett expected. Things that unfortunately happen in late-game scramble drills.

“I felt like I thought he was gonna come back down,” Pickett told reporters post-game. “He ended up going vertical.”

We can fulfill Roethlisberger’s request with the All-22 of the play. Here’s a look from the aerial view.

Johnson is even with Igbinoghene as Pickett throws the football. It appears that Pickett is trying to throw a backshoulder play while Johnson kept running downfield. Igbinoghene got his head around, found the football, and ended the game. It’s debatable what the right decision was. A backshoulder throw with Johnson pinned along the sideline would’ve been tough but there’s not a ton of room in the end zone for Johnson to run vertically either.

Ultimately, I side with Johnson running vertically but ideally, Pickett scrambling or throwing the football away and fighting another down would’ve been preferred. After throwing short for most of the drive, and time running out, Pickett wanted to take a shot in the end zone. It’s a hard-learned lesson for a rookie quarterback naturally going through ups and downs of his first season. While box score numbers can be deceiving, he’s thrown just two touchdowns and seven interceptions this season.

“I hate it too for Kenny…he drove them all the way down the field. I want to know, did he make a bad choice there?”

On the road and in the rain, Pickett moved the offense ten plays and 62 yards. He made sound decisions and good throws, none bigger than his fourth down conversion to Pat Freiermuth down the seam. But the only thing that matters is the result and for the fifth time in seven weeks, the Steelers are facing an “L.” That makes next Sunday’s game a must win road game against the undefeated Philadelphia Eagles, a tall task to save the Steelers’ season. Only one 2-6 team has ever made the playoffs, the 2020 Washington Commanders, who won the NFC East at just 7-9.

If you’re interested, check out the whole stream recap below. It should be teed up right around to Pickett’s final pick.